I've just finished uploading beta test build 0.975t bluebottlegames.com, which consists of some significant gameplay balances and bug fixes. This test build is a prelude to a full suite of beta and demo updates, assuming no major errors are found.

All beta users and Desura pre-purchasers can get access to a special "Test" build that I've uploaded today, v0.975t.

One of the bigger changes in this test build is the way creature spawns happen. When scavenging, attracted creatures will no longer appear in the same hex as the player. Instead, the game will alert any nearby creatures to the player's presence, and those creatures will approach/flee accordingly.Also, the starting area should prefer bandits to raiders, which are slightly less well-trained. Furthermore, the number of bandits typically found will be smaller than previously encountered raider groups. 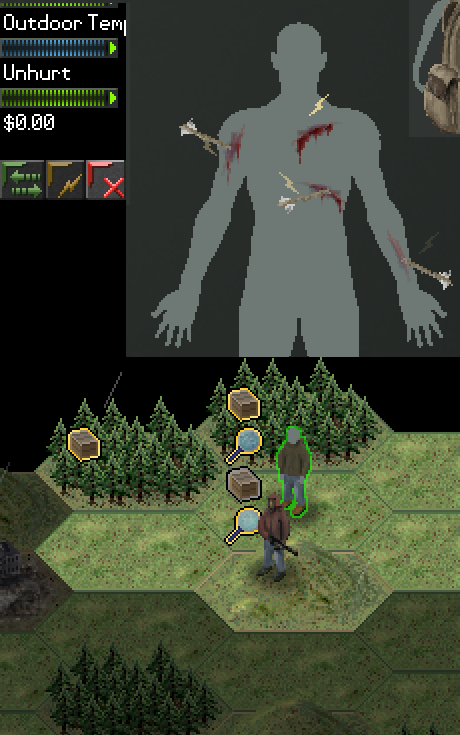 I've also added an encounter which shows up in some early games when the weather is particularly harsh. If the player is unfairly being frozen to death and not finding clothes, this encounter should give players at least a fighting chance.

Primitive missile weapons no longer drop their missiles to the ground after being fired. The missiles are lost unless they stick into the target, in which case they can be recovered when the target falls unconscious or dies.Missiles stuck in a target represent health hazards from wound exacerbation and removal. Missiles should also degrade when fired, unlike before.

The "Destroy" cursor is back! Players can once again quickly delete large swaths of items by holding the 4 key down when clicking. Also, the mouse scroll wheel now maps to switching attack modes.And in encounters and battles, the cursor will now default to take/drop, and return to whatever the player had before when done. I think quite a few people didn't realize they could advance encounters with a single click and spacebar, and this might help.

Crafting and Other Bugs

Overall, this test build should be a little bit more fair, and a lot more stable. Let me know how the changes feel, and if you notice any major issues I've missed. If it seems pretty safe, I'll roll it out to replace all the 0.974 builds!

Definately an improvement, took me a few minutes to get used to the different layout, kept going to wrong place with my mouse lol survived the longest ever so far (4th day) =] keep it up

I made it to 10 days 74b. But that was lucky. I think the most important change is stopping guys from spawning on scavenge. Mostly because weak chumps spawn and run. Then repeat... Soon you have a freakin army of them. lol Very smart change there.

Cool, glad to hear it seems improved! So it doesn't feel too empty in 0.975t? That was my other concern. It gets a bit easier, but I might've made it too easy or depopulated.

@Roh, yeah, that's true too. Weaker guys find confidence in numbers, and they can be a threat of their own!

2 Raiders were running away from 3 Dogmen. So the population seems fine.
I wouldn't say easy, 2/3 times I die of blood loss or freeze lol the raiders and the dogmen are only half the fight.
i would say the only bug that comes to mind is the full screen and stretch screen don't fully function properly, only a minor thing and if that's your worst problem, treat yourself to a beer out of my purchase ^^,