I've just uploaded new beta (0.961b) and demo (0.961d) builds, which include the option to play in larger resolutions and font sizes. The builds also address some crafting issues, as well as other bugs identified recently.

I've just uploaded new beta (0.961b) and demo (0.961d) builds, which include the option to play in larger resolutions and font sizes. The builds also address some crafting issues, as well as other bugs identified recently. 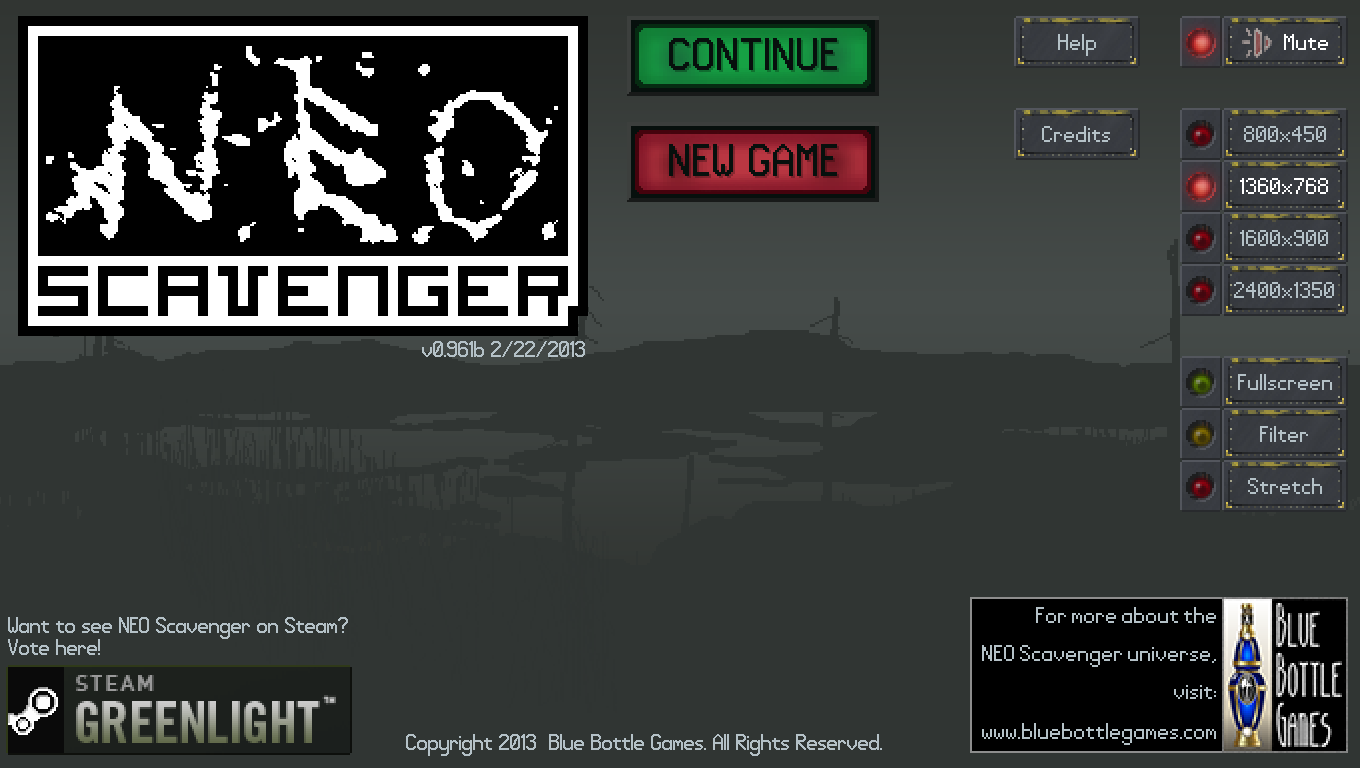 
As you can see, quite a lot has changed. The majority of the work involved opening up new screen sizes for users with bigger monitors. The game now fits a widescreen format, and will letterbox any additional space instead of stretching. This helps to maintain the pixel aspect ratio, and produce less jagged fonts and images.

However, in addition to the larger screen sizes and fonts, there are also some graphics options for filtering, fullscreen, and stretching, in case you want to further customize each mode.

The game will try to remember your settings from session to session, using cookies. 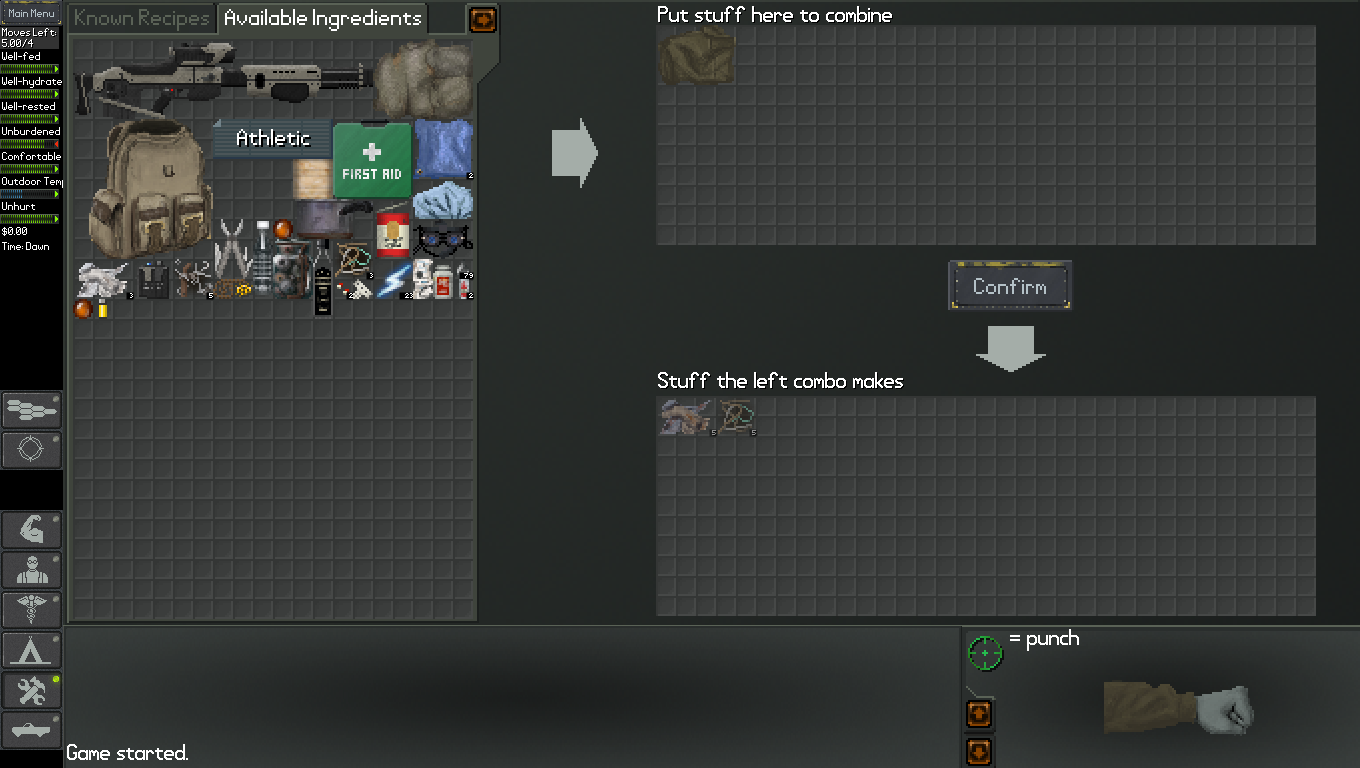 Another big change is the crafting UI. The crafting controls are now on their own page, with everything in your inventory already emptied out and sorted by size. It has multiple pages in case they don't all fit, and you can switch tabs to view your list of known recipes.

What's more, everything on this page is a copy of the original, so no more blindness when using a campfire to craft at night! Items created on this page are automatically added to the ground on the items screen. If the ground cannot fit the item, it will alternately try to fit it into the camp slot. 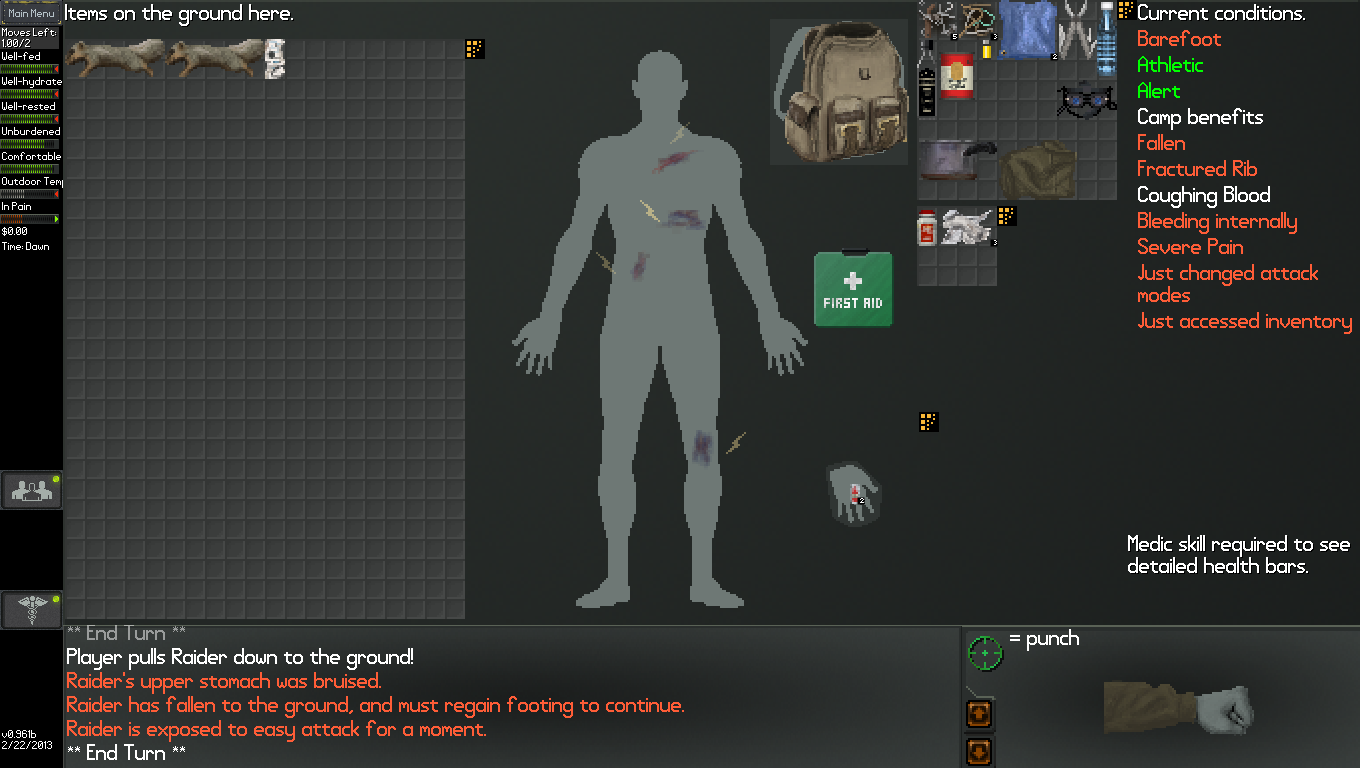 I also found a way to combine some elements of the items screen with the conditions screen, as many players requested. Hopefully, this makes it easier to apply bandages from the handheld and backpack slots!

The following updates apply to the beta only:

Most of these were fixes to the new DMC encounters introduced in the last build. However, the fix to save games should be a big improvement, since it should make saving during an encounter safe now.

Just a heads-up to Linux users: fullscreen mode doesn't seem to work with keyboard input. This appears to be a limitation of the Flash player's current version on Linux (11.2). Keyboard support was added to Windows/Mac players in 11.3 and higher, so this won't be fixable until a new version of the player is available for Linux.

In the meantime, you can still maximize the window to get nearly fullscreen, and the keyboard will still work. I apologize for the fluke, as I didn't notice it until testing the Linux build this afternoon.

As always, let me know what you think of the changes, or if you come across any issues. I usually don't work on weekends, but I'll keep an eye out tomorrow in case I've totally pooched the build and you need a major fix done.

Hope you enjoy the update!

Actually, Adobe dropped Flash player support for Linux some time ago.
Version 11.2 is the last one. Only Chrome gets updates through NaCl. Sooo...

Yeah, I saw another comment to that affect. Crap.

I'll have to see what my options are. A total rewrite of NEO Scavenger in another platform is a pretty big undertaking, so that's not a decision I would make lightly. But there might not be any other way.

Awesome, this update sounds great. I guess it's mostly just graphical tweaks, but fullscreen support will be really nice!