Patch 1.0.1 for the HL2: Wars multiplayer beta released, with 2 new maps, bugfixes, and balancing changes. Also, we discuss our future plans and ask for your votes in MOTY 2010!

We released Beta 1.0 of Half-Life 2: Wars a little over a week ago, and the response has been overwhelming. We'd like to thank all of you for your comments, suggestions, and feedback on the beta, and encourage all of you to stop by our forums and tell us what you think if you haven't done so already. Today we have several things to talk about, first and foremost the release of the first patch for the beta. 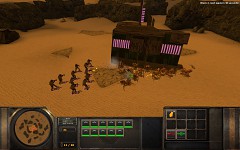 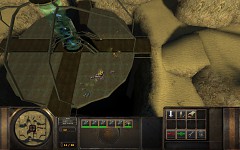 The Beta 1.0.1 patch fixes a lot of bugs, glitches, and crash issues. It also makes a number of gameplay balance changes that are intended to fix some of the issues we've seen in online play such as early game rushing. There are now 3 tiers of research for both the Combine and Antlion factions. In addition to bugfixes and balance tweaking, the patch adds two new maps from our community to Half-Life 2: Wars: wmp_ancient and or_hot_sands. Ancient is a skirmish map made by AntiViper and Hot Sands is an overrun map created by pandango. The 1.0.1 patch also adds several new ability icons that were placeholders before. A complete changelog can be found in the patch files. This patch is incremental, meaning it requires that you have Beta 1.0 installed!

We'd also like to thank all of you that voted for us in the first phase of voting in ModDB's 2010 Mod of the Year awards and got us into the top 100 for the final round of voting. We'd also like to ask that you all vote for us again in Phase 2! Head over to the MOTY voting page and show your love for Half-Life 2: Wars!

Lastly, a little about our current plans for the future. We are now focused primarily on implementing the Resistance faction and adding both it and an improved version of the Combine faction to normal game modes like Skirmish and Capture the Point. The normal Combine faction will be different in some ways to the special version of Combine used in the Overrun game mode, so don't think you've seen everything they have to offer just yet. In addition to general improvements and getting these two factions in-game, we want to add more multiplayer maps of all kinds. We'd like to issue a general call to level designers for maps; our community mapping forum and the WarsWiki mapping documentation are there to help you guys with any questions you have about mapping for HL2: Wars. If you make a good map, we'll include it in the next patch or release and credit you fully.

That's all for this time folks. We hope you enjoy the patch changes and new maps, and please don't forget to vote for us in Phase Two of the Mod of the Year 2010 competition!

* Overrun Game Mode:
- Number of antlions will now keep growing each wave (not limited to 100 anymore).
- Reduced starting resources from 20 to 15.

Fixes:
* Several stability issue's.
* Burrowed antlions no longer block other units.
* Crash when using the "Control Unit" ability in sandbox mode as spectator on the ground.
* Crash when moving the player to one of the corners of the map/world.
* Players unable to join a listened server.
* Being able to execute an ability as global power when the unit died while the ability is active.
* Old active ability not being canceled when selecting a new ability from an unit.
* Upgrades not taking resources from the player.
* Resources not being refunded if you cancel placing a turret or mine.
* Combine Shotgunner not using the correct skin due the wrong order of the search paths.
* Rallypoint flag not disappearing when a building is destroyed while you have it selected.
* Antlion Workers not automatically starting construction after placing a building.
* Build target position being too far off the Mini Hive, causing the antlions to spawn below the ground in some cases.
* Missing move sounds Antlions.
* Names of players not visible when directly controlling an unit.
* Being able to select a position as spectator in the gamelobby.

Misc:
* Updated Python to 2.7.1
* There is now a small delay of 3 seconds before changing to the gamelobby after a successful vote.
* In sandbox mode players are no longer assigned to spectator when joining in the middle of the game.
* HUD not longer shows abilities if you select an unit you do not own
* Double clicking an unit you do not own no longer results in selecting your units of that type (this still does work for your own units).
* It is no longer possible to mix units you do not own in your selection.

YAY! I love this mod.

I like this game but I would like to make a request for a european server as well, so I and others can fully enjoy it.

Now, you also have the option to set up your own. There are guides for that on the forum If I'm right, head on down there.

If I had a server I would have done that for sure. No need to defend anyone. I was just telling, so people know there is a need for that and someone might be able and willing to provide one.

you can just start one from your own pc. all you need to do is to follow the tutorial as The Joker said.
you can find it here: Hl2wars.com

nice fixes.
Right now the homepage and forum is crashed. :/

Will play the new version today.