Welcome to WPR #20! This week, albeit a bit late, we have some more screens of the Bunker to show off. The first floor of the bunker is finished structurally, meaning that no new rooms will be added but existing rooms can, and probably will, be modified.

That out of the way, here are the screens: 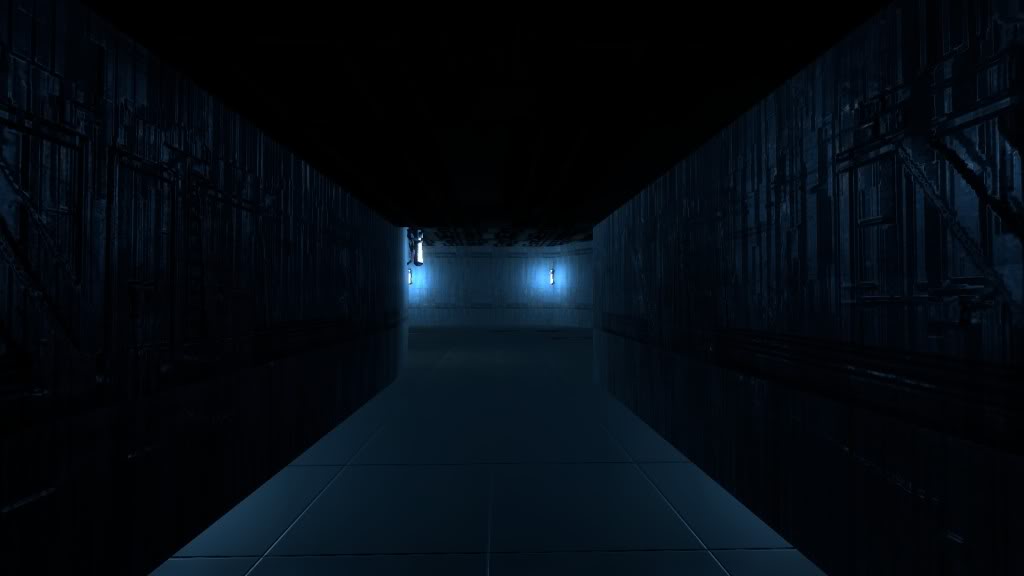 I had to elongate the passageway into the room from last weeks WPR in order to get the new hallway tunnel to line up with one of the other rooms. It also enhances the claustrophobicness of that section, I think. 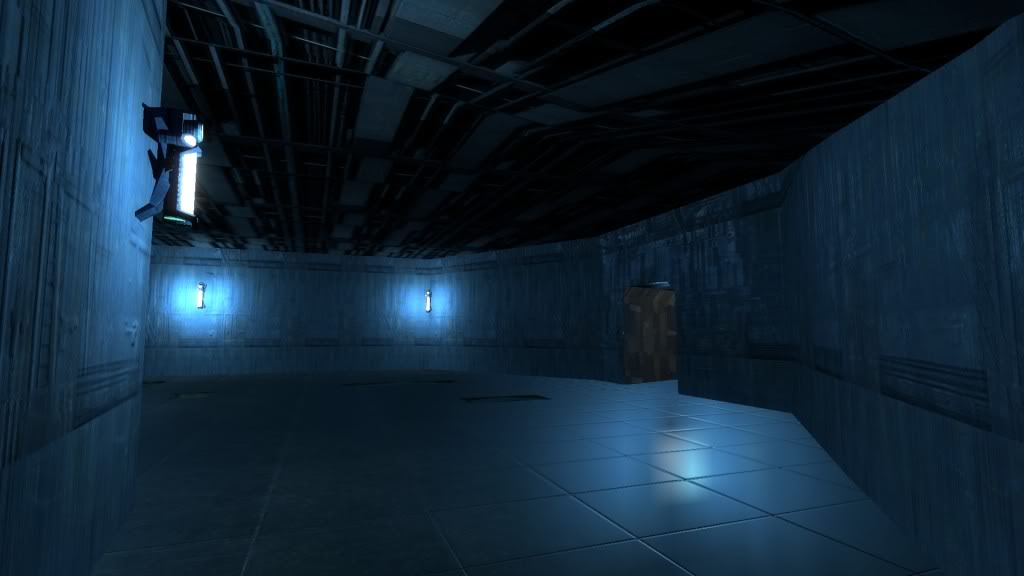 Added the cover panels as will as the lighting. I originally have a generator where that door is now. I had to move it after my first hallway tunnel experiment failed horribly. Move the Gen into the next screen shot area. 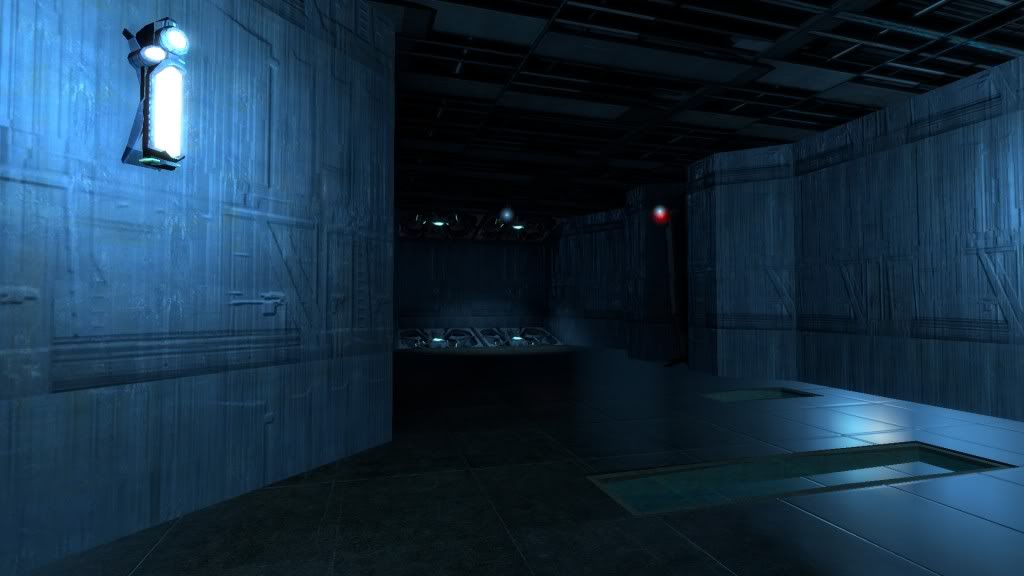 So, last week I mentioned that there were two areas that were going to get tweaked a bit. Well for the teleporter area I took my idea one step further and slanted both the floor and ceiling sections. There is that generator I mentioned from the last screen. All generators will have those kind of sprites on them in the final version of CI. 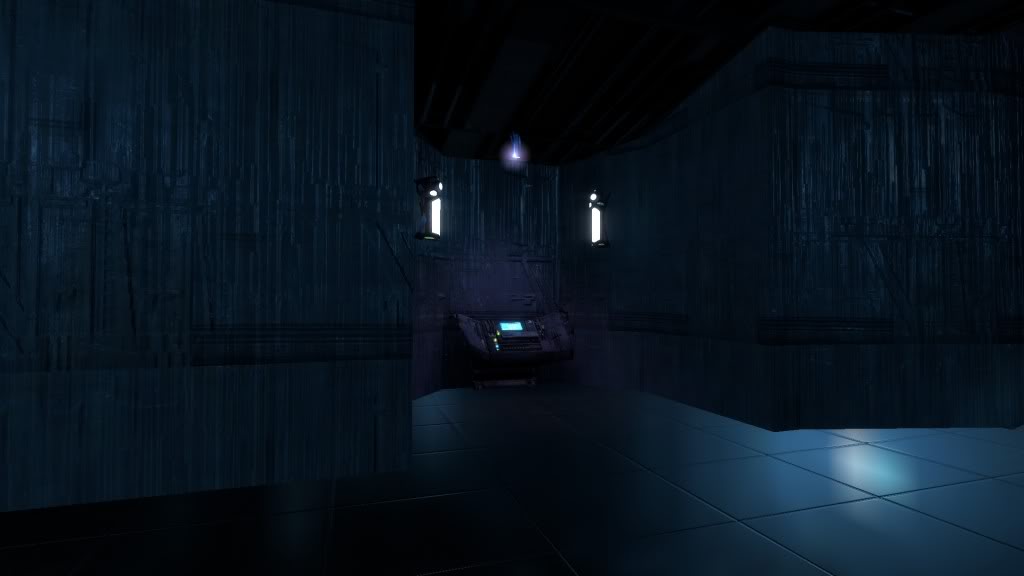 Control panel for the teleporters and shield walls in this area. As with generators, any combine interfaces that have an interaction with the map or that the player can use will have sprites to light up the buttons on them. 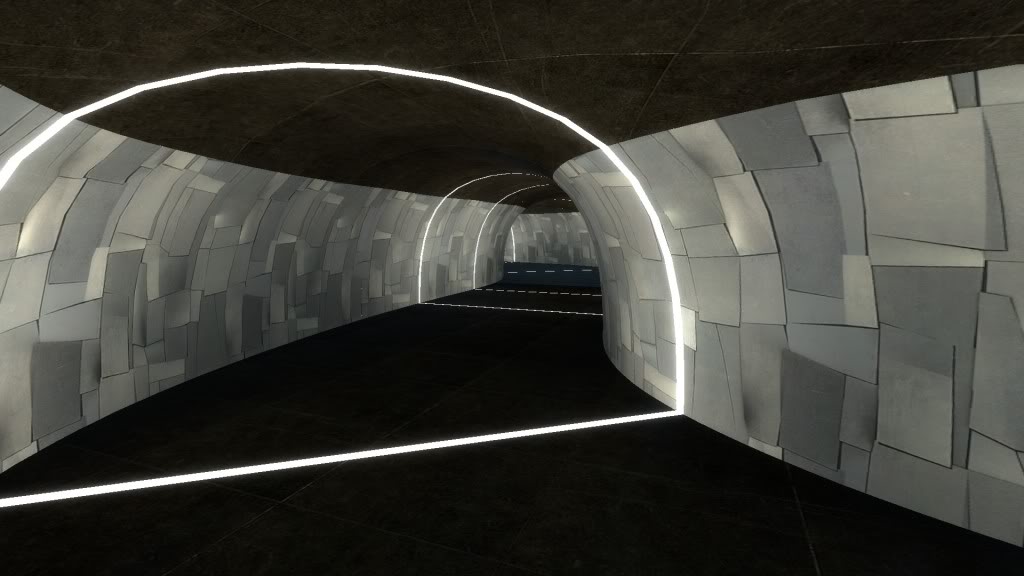 And so we arrive at the problem child that pushed the update back a day. I had to go with a move direct approach for this one to get it to work. Copy pasted another hallway section and spun it around to give this effect. The original one was going to be much longer but after taking two hours to work on it to find that the idea was not going to work I fell back onto this for right now. Will be going back through and removing the floor light strips in each of the hallways that have them. This has two bends in it, opposed to the usual one. 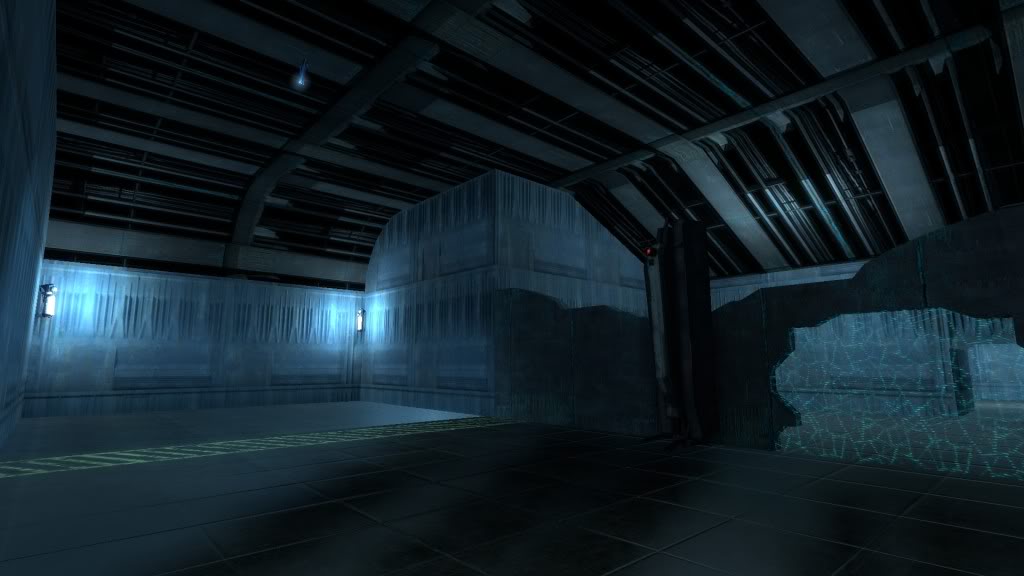 This place should look familiar. It is the second area of the map. All of the other sections lead back to here. The player can disable the shield wall or not. What the player does will effect the map when you come back through, in terms of soldiers to fight.

Last week I mentioned that we might have a few more songs. Well I have five new ones for you this week. This is likely to be the last BGM music update though. We want to keep some stuff a secret, for the wow factor and all.

This one will be used on either out doors map for Chapter 2.

This song will play as you exit the Combine Bunker after having achieved the objective.

This song will be used in the Catacombs/Mines in Chapter 4.

This one will be used in Chapter 1, likely on NPZ Floor 4.

This song we will be used for a boss battle; unsure for which one at this time.


That's all for this update. I will keep working on the mall map and try and get it ready for some more work. Next week I will also start on the first of two under ground maps for the Bunker.

Thanks for following CI!

Its really starting to come along, great job.

I (and others) think you are slowing down your own production by posting weekly progress reports. Your screen shots do not change much from one week to the next. It's like you are more concerned with keeping your mod's stats high than you are with making a good mod.

I'm not trying to cut you down but you should consider reducing your updates to monthly affairs so you can focus on making your mod great. You show good potential. In addition, there is such a thing as too much transparency. Showing off too much of your mod will reduce the amount of surprise and wonder a player has when checking out your mod.

My short answer: Thanks I'll keep that in mind.

My long answer: Most of the stuff in these weekly reports (even of "finished" maps) won't represent the truly 100% finished maps. As I keep working, getting more experience with hammer and through comment feedback I will likely g through everything and scrutinize it.

Does it look good or like crap? Could there be more interesting things here? What if I changed the lighting here? Etc.

For now I have not said anything big about the plot line yet other then you play as Gordon and are eventually going to defeat the Combine once and for all. Even I do not know how this story will end, it's a work in progress. I have ideas about how it should and what progression it should take, but you never know when you may get an idea that will change a story completely.

That in mind, I understand about being too transparent or too CIA-ish is a bad thing. I'm trying to walk a fine line between releasing enough of the work being done to get people interested and not releasing too much of what will be in the finished product.

Right now I can say that every area in each screen shot will either have more stuff added to that area or not look the same (lighting or otherwise). I do not plan on releasing images of fully 100% completed maps, just much of the work, throwing out a figure I would say 60% to 80%, up to that point.

But yes, I will entertain the idea of monthly updates rather then weekly. It may or may not speed up progress though, that is from external forces outside of moddb/moding; collage and other projects.

But here we are, at the end of February, maybe this is not such a bad place to start doing monthly updates. I will need a bit of thought on it though, so I will likely let you know in the next report.

Anyway, enough typing lol, walls of text are generally not read on the internet <_<

You want to release pictures that are 100% complete because they are gonna be the most impressive. That said, you should only release 10% of your 100% complete pictures, leaving the public to explore the other 90%.

While I really like the work your doing, I have to agree with joe_rogers 11155 on a few of the points he makes.

I also understand what you are attempting to accomplish using the " weekly updates " philosophy and I don't necessarily disagree with it for the first few weeks to show your work and gain interest, but you've gone well beyond that point and now your giving us too much.

Trust yourself with what your learning, run with it and enjoy doing it. Although constructive criticism is valuable, don't ever rely too heavily on it for any decisions or changes you might implement. Show us your ideas, not ours. I can't speak for everyone, but I'm watching and enjoying the anticipation of the projects release, but I don't want to recognize 1/2 of it when I do. ( Hope I didn't come off the wrong way here. )

I will keep my comment short and to the point. I like your weekly updates and think that your lighting is pretty good.