A review of the new database of procedural ASCII particle effects.

After spending a couple weeks completing item art, next up was assigning particle effects to the 200 or so weapons. Last time I posted about ASCII particle effects (not long ago) was regarding the "first pass" at them a few months earlier, when the work was more about doing "what I felt like" and thought would be interesting (that and cleaning up and tweaking a library of existing scripts from my other games).

This time around was quite different--with the semi-final item list ready, it was time to assign all the particle effects to weapons, filling in any holes as I went along.

There were a lot of holes ;)

And of course a lot of other tedious work to do along the way, like ensuring there is a proper visual progression for effects used by early and late-game technologies, ensuring effects for similar weapon types are consistent with one another, etc. This would be much less of an issue if working with a small set of weapons, but there is quite a lot choose from in Cogmind, being a very dynamic component-based system.

Particle scripts currently contain the following number of different styles for each category (the number in parenthesis was the original count when starting this most recent phase):

Remember that these are unique styles, not recolorations, the latter being easy to do with a single line of script so they don't count as "unique" (weapon sub-variants do generally use recolored effects for easy recognition, however).

I compiled a few new ones into a single image: 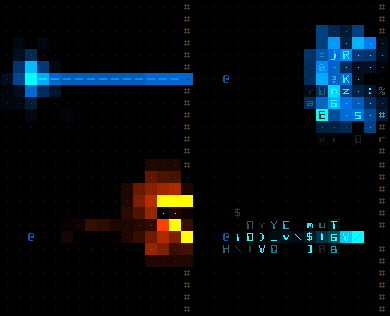 An energy weapon, missile blast, and a couple EMP weapons.

The animations are tough to catch in a good screenshot (I believe I took some better ones last time), so here they are in gifs, along with a few more:

Firing some cannons and energy weapons (twice each).

In total I spent 29 hours creating new particle effects and linking them to various weapons, splitting the time up over a week as it was rather draining. Honestly I think some of the effects are really cool, but more of them could be better. Having already spent a while on it, now's a good point to move on since all weapons at least have their own effect. If there's time or it seems absolutely necessary, tweaking the effects further after more playtesting will be easy.

Freaking awesome! I love it! XD

Thank you, so much more work to do, and "work" it is! The results are worth it, though ;)