An overall status of the mod for the month of September 2020.

Welcome to the September 2020 Progress Report. An amazing month for the mod, with many milestones reached.

As of a few days ago, a brand new faction has been introduced to Galactic Legacy; Infinities. The infinities faction will feature characters in non-canon works of star wars, such as Lord Starkiller, among others. Additionally, characters featured in the Extended Endings (such as Ghost Qui-Gon Jinn and Crazed Darth Sidious) will be featured.

The NPC Menu is 100% completed. Save for 1 code change that will be implemented. The NPC Menu will feature customizations never seen before in any Jedi Academy mod. You'll be able to select initial behavior, such as force immunity, playing dead, standing at ease, sitting on a chair, and more.

You will have full access to any model's customization, allowing you to take full advantage of customizing any NPC with a customizable model, making them appear as whatever you'd like with what's provided to you.

A popular request often asked for is the ability to customize NPC health. You will be able to select that too with preset values ranging from 10 hp all the way to 10,000 hp. 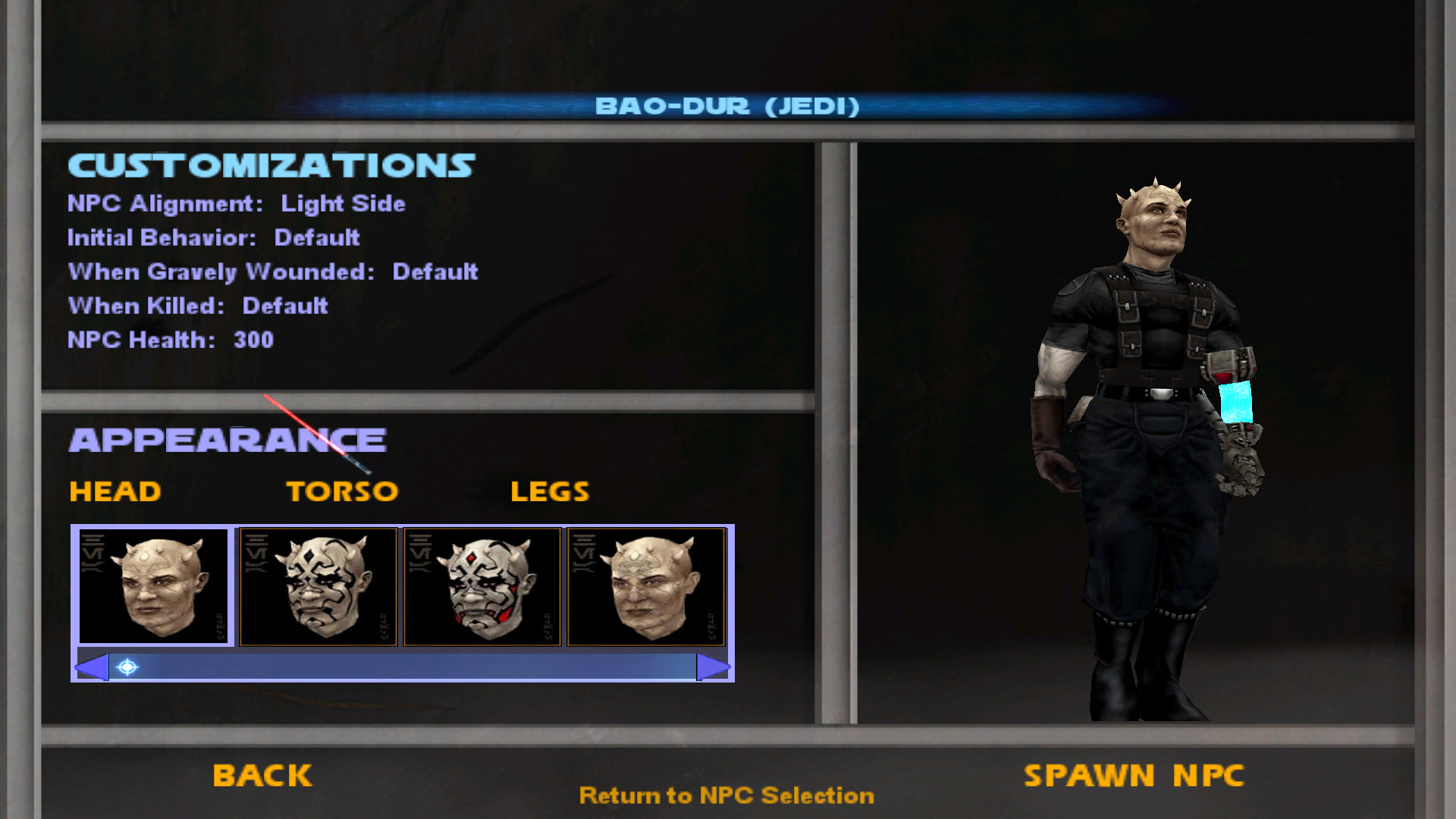 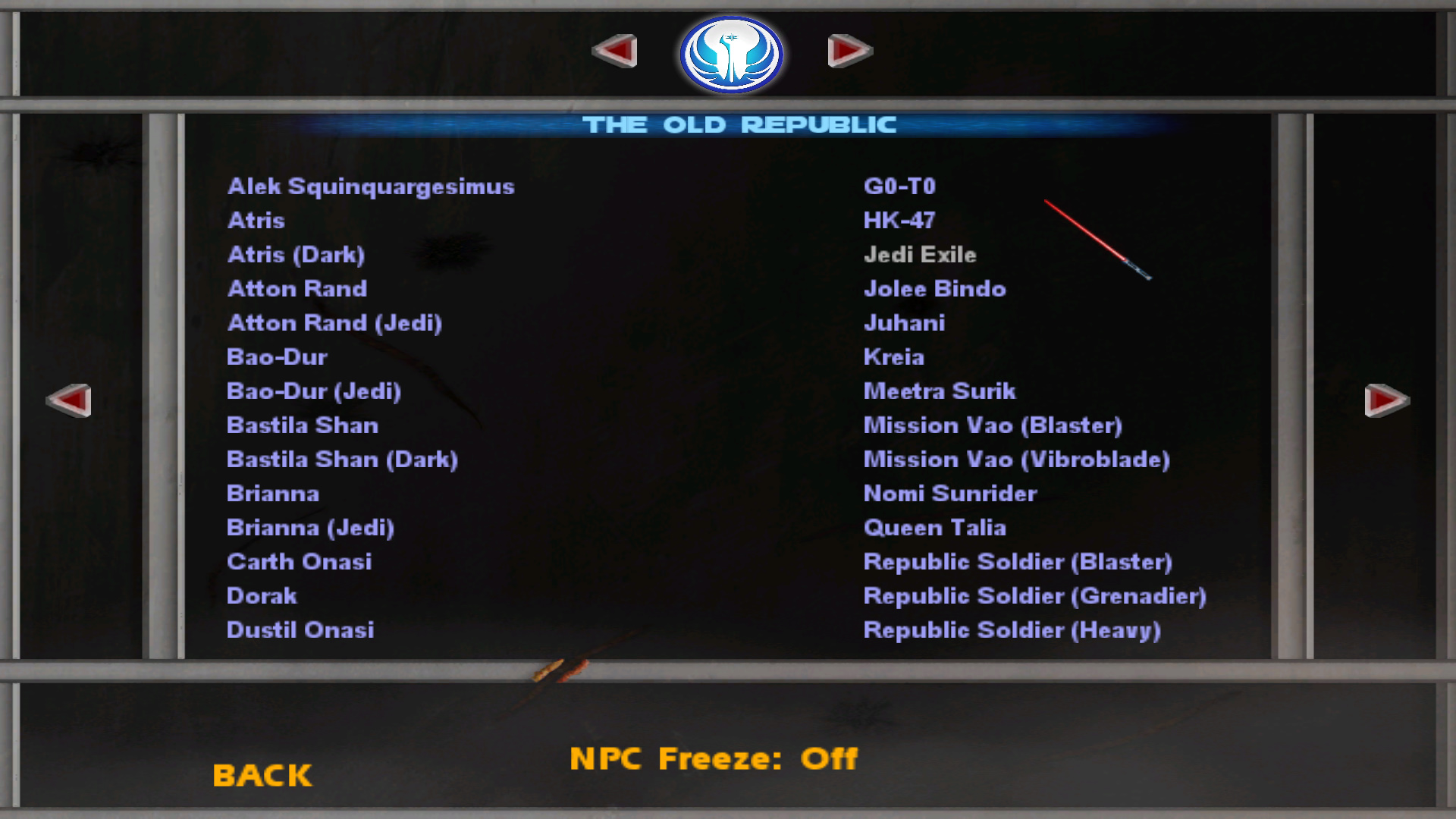 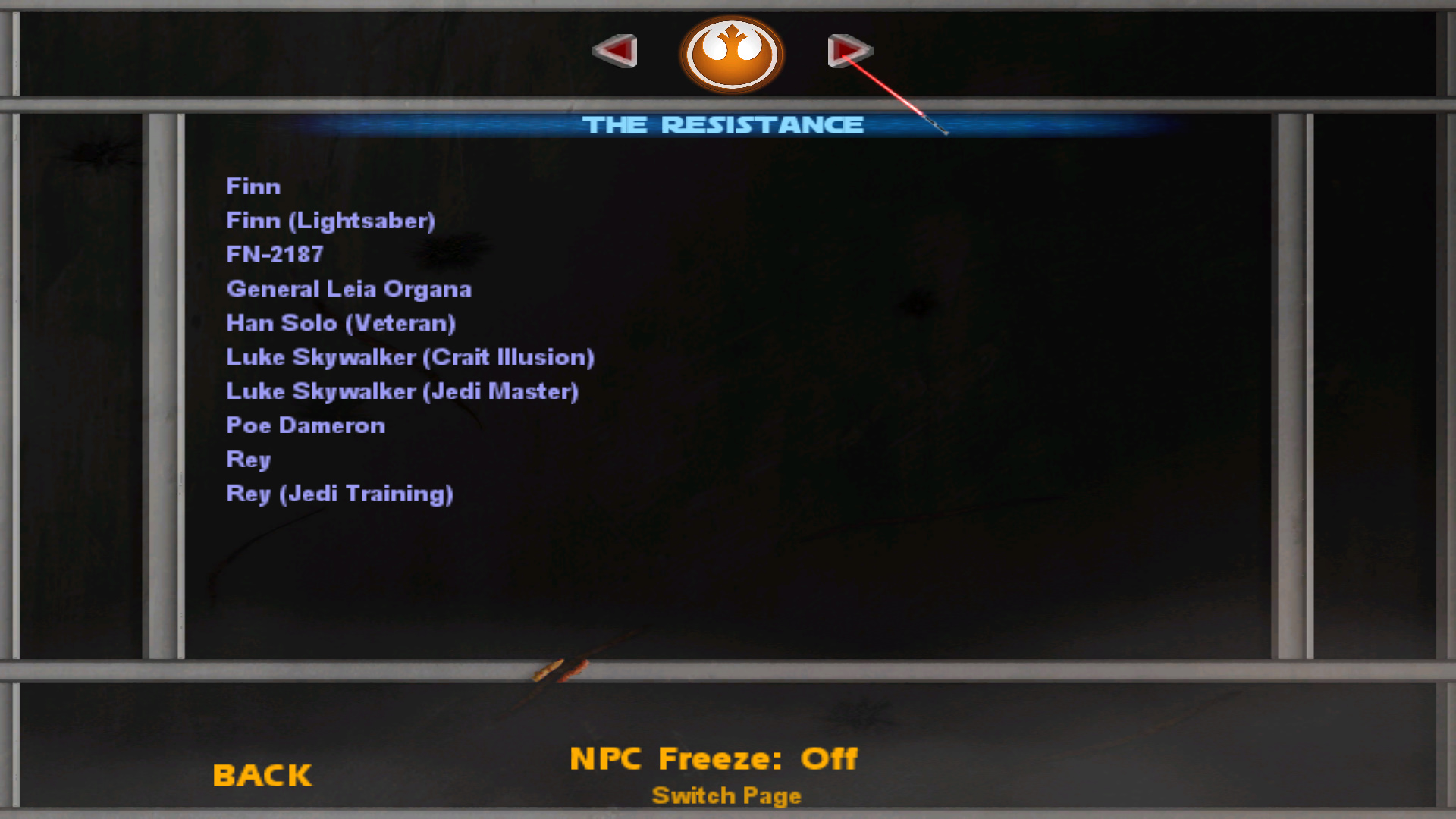 HOW MUCH CONTROL IS POSSIBLE?

This screenshot was taken solely with the use of the new NPC system, no scripts were used. 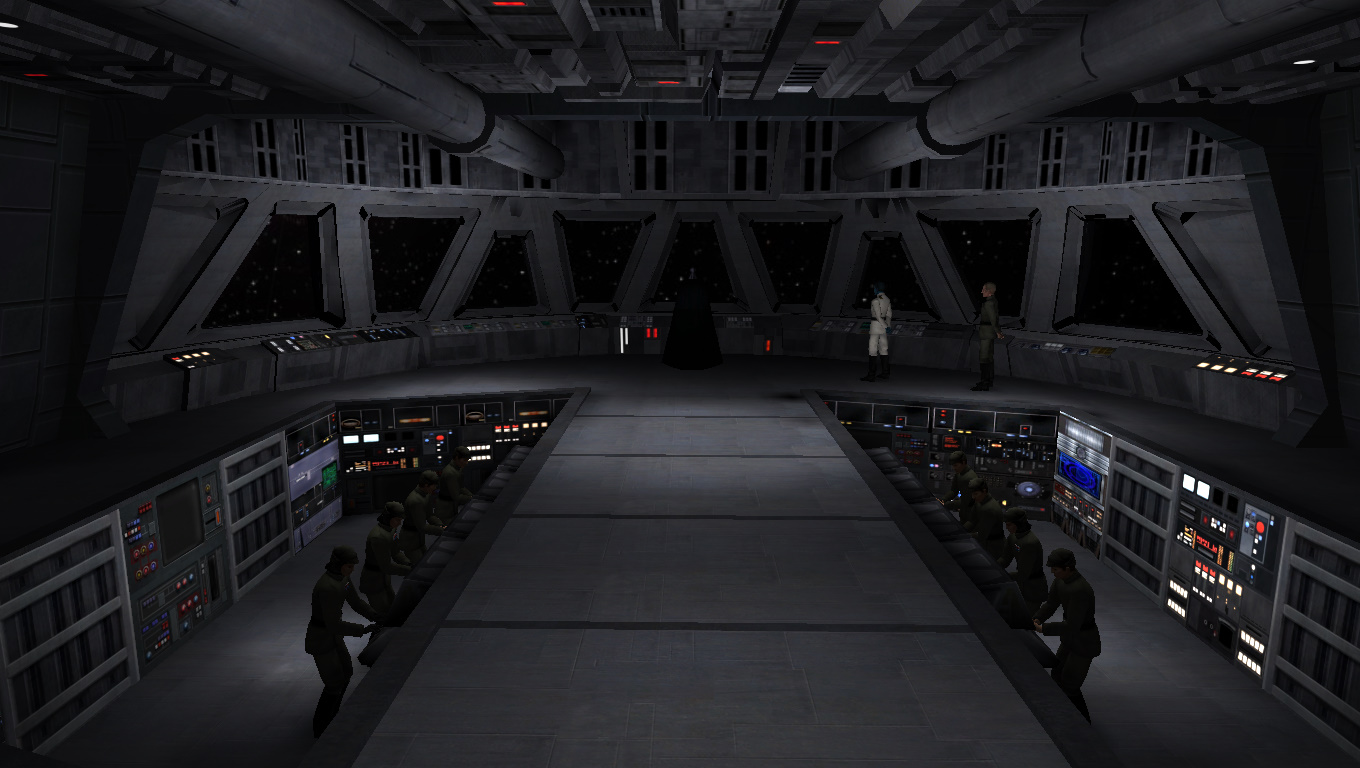 As of this report, Darth Maul's extended ending is approximately 75% completed, with the overall story being split into 9 parts. While the ending will have 9 different maps, it will be a relatively even 50/50 split between gameplay levels and cutscene levels. 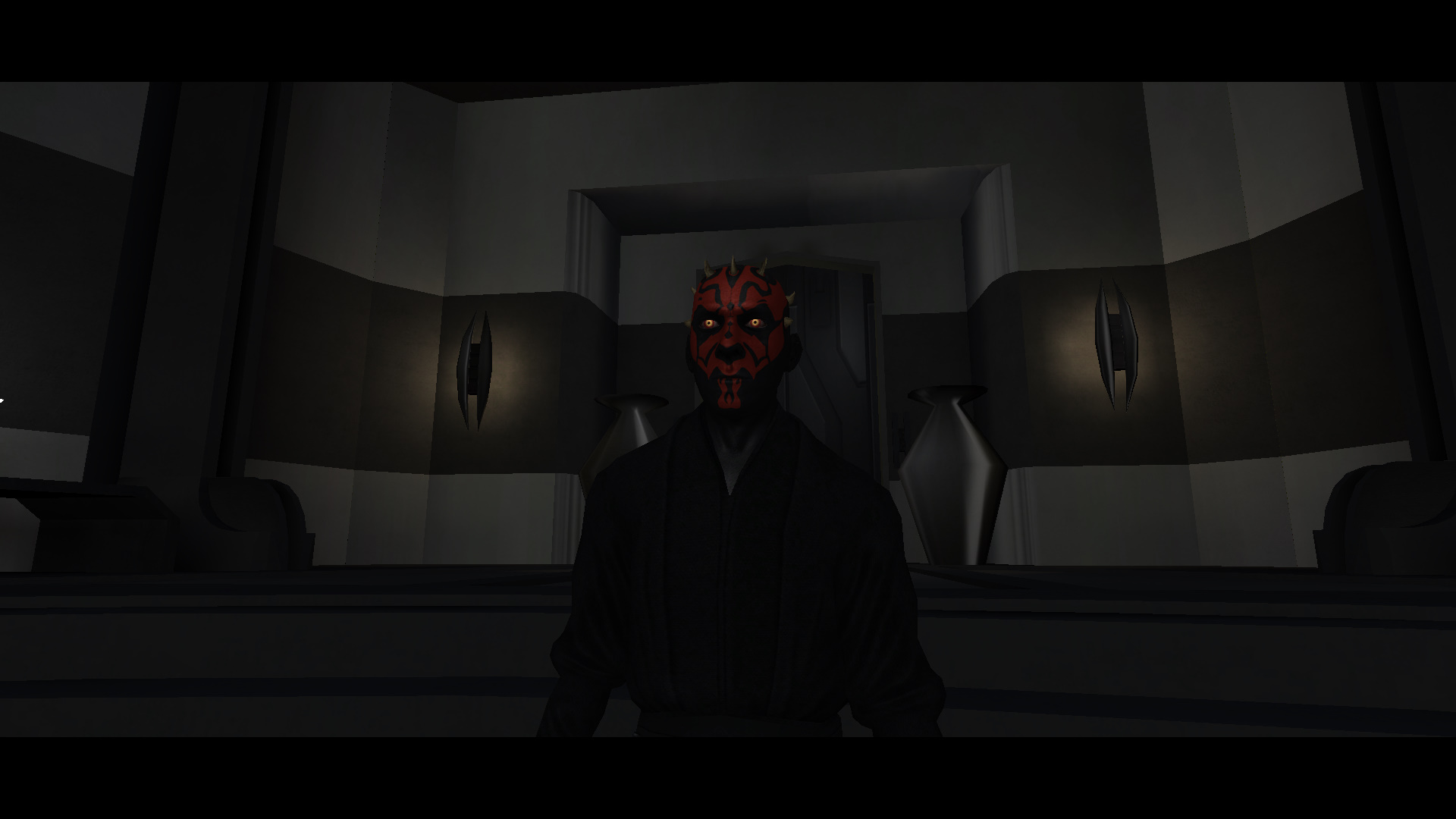 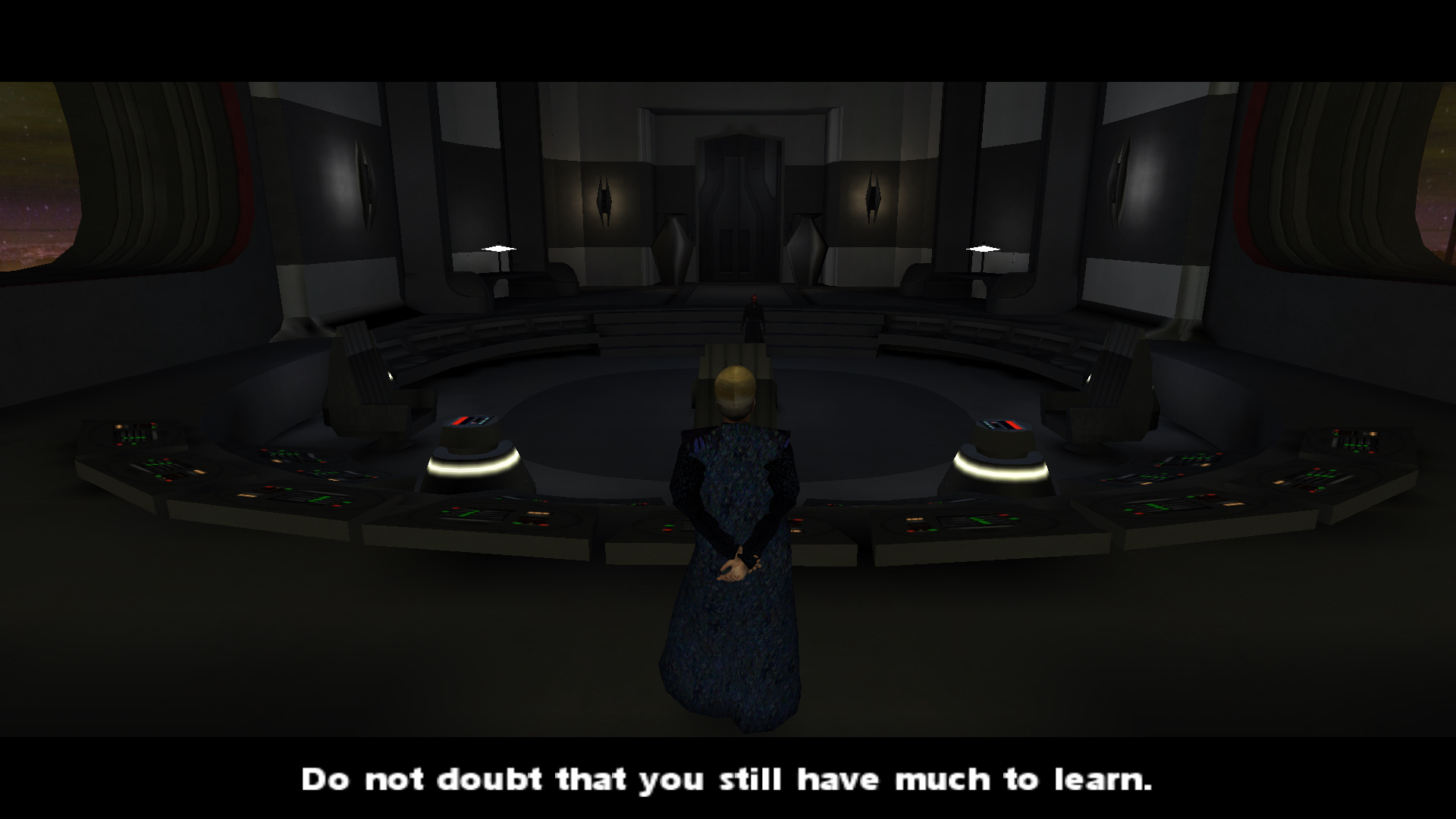 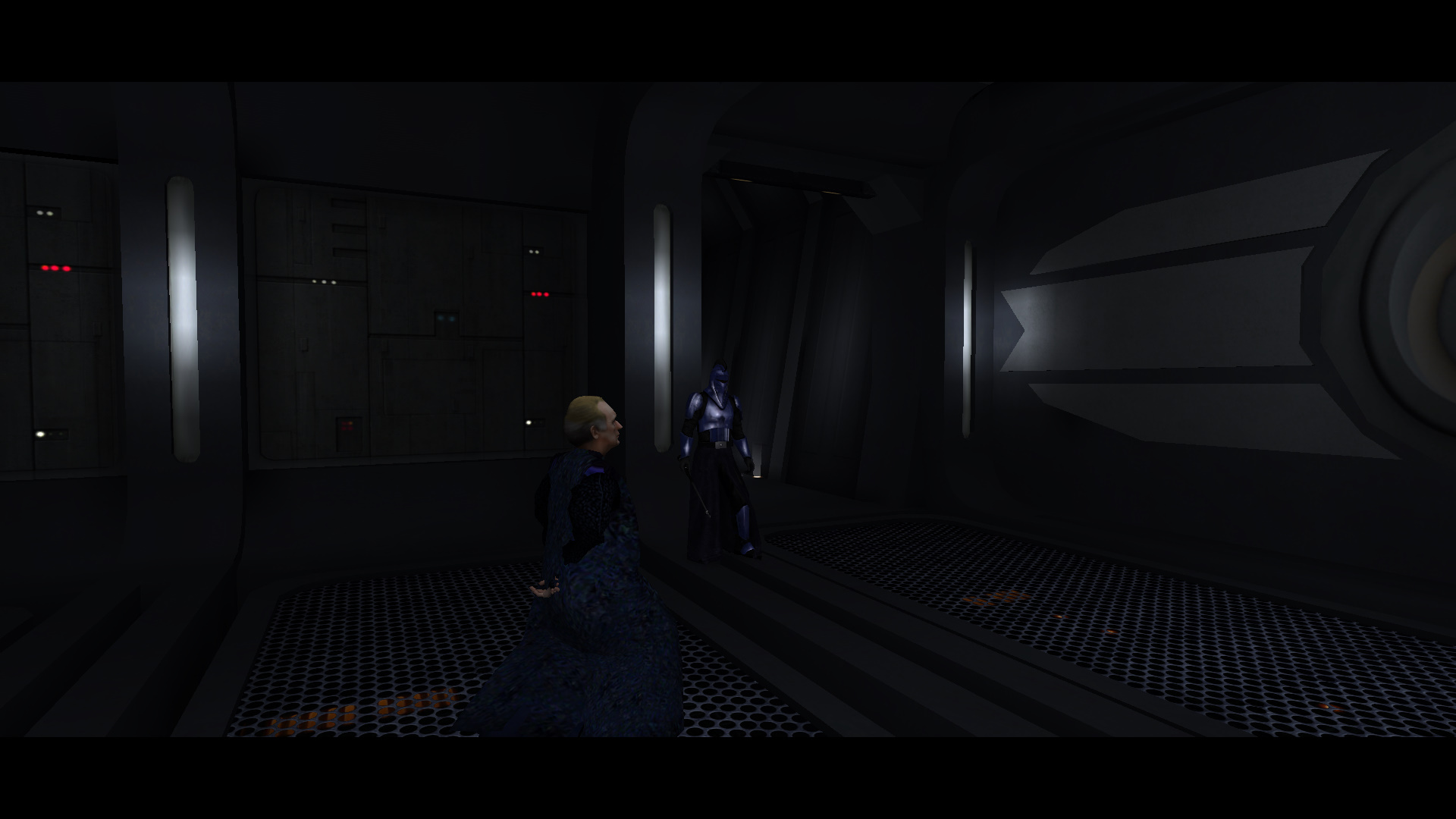 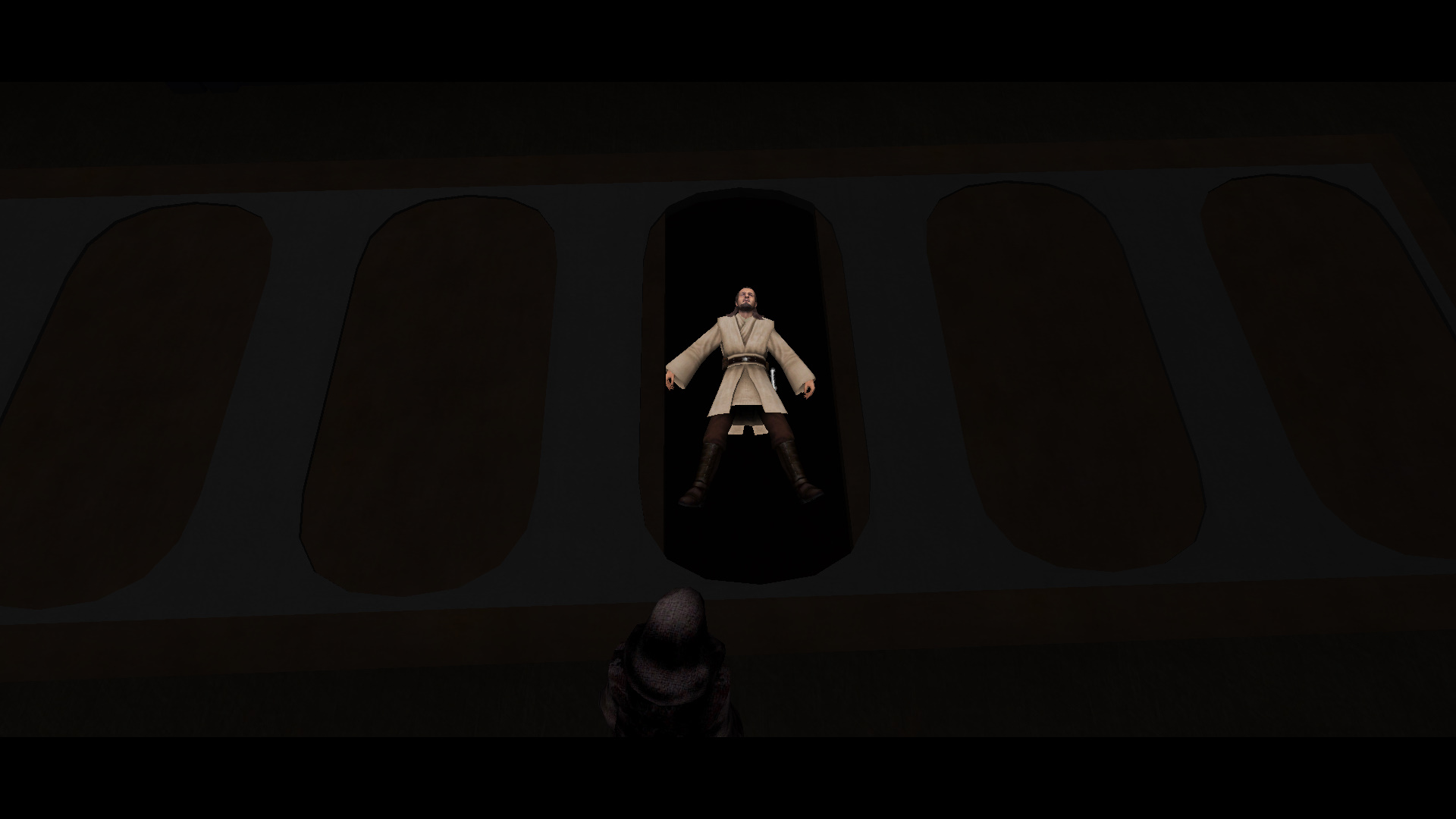 A great month, will more milestones reached. Next month we hope to complete character selection and Maul's extended ending.

Hi, i´m really excited reading this stuff about the NPC Menu.
Now i have a few questions thou:

1. Can we (and i hope it will) save the Positions and their behavior, so the next time we restart Jedi Academy and load the level, it will be exactly like before, so you don´t have to reposition and reconfiguring the Chars again? Without having this ability, while it´s nice to see such a cool NPC Menu, i see no point in it when you can´t save it. I mean with the addition of the behaviors we can create our own custom missions now.

2. If yes, how will these Savestates work? Are they accessible in the normal Save Menu? I would actually prefer an additional Menu for them to avoid Users getting confused if they build multiple saves.

3. A much better thing to use would be Config Files that you could use for this NPC Save States.

4. I see that this "Galactic Legacy" Mod is made from members of the "Knights of the Force" Mod. So is this a just another Mod that exists besides KOTF, or can we actually see this as a replacement for KOTF from now on?

1. Yes, save games should be working by the time we release.

2. Accessible in the save menu. A separate menu would be cool, but if we elect to go that route, we'll need to code an entirely new system. Until then, it's the player's responsibility.

3. Probably more possible, should be easy to code. We have discussed a map population idea to make the maps more lifelike.

4. We exist beside KotF, but more accurately we're completely overtaking that mod. KotF hasn't had a single update since we left, even our former leader admitted he's had no time or desire to work on the mod. The development channels on the discord server are dead and the most activity seen from there is a new member joining the server.

I hope I answered your questions satisfactorily.

The hype is real, ladies and gents!

I am so looking forward to this :-) Awsome work