No, I’m not adding a paintball mode to the game.

One of the major bits of feedback I got from showing my game at AMAZE Berlin last month was that there’s a lot of potential for more spectacle in the game: more satisfying crashes and explosions and things whizzing past. We like large amounts of kinetic energy, don’t we?

So Airships 6.4 concentrates on making that happen. Airships now crumble majestically instead of evaporating in a single flash. Bullets and cannon balls leave trails in the air, which both looks cool and helps communicate what’s going on. 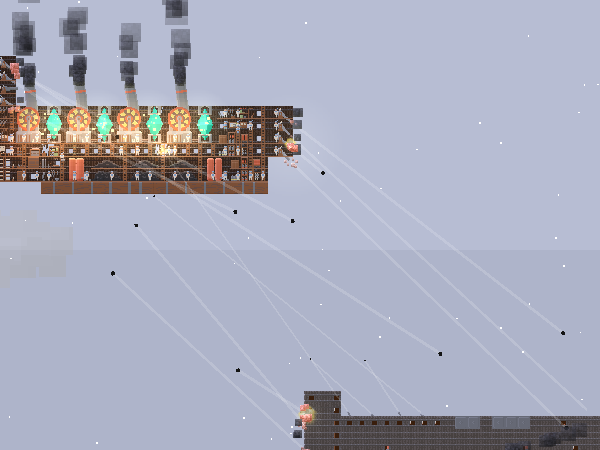 With these updates, it became clear that there’s one major missing piece to the spectacles: module destruction looks really boring. The module just winks out of existence and leaves behind a small number of boring brown particles. This needs fixing. Modules should break apart into parts and shrapnel, spinning and arcing away. To make this work properly, I’ve created a new layer in the sprite sheet that splits each module sprite into the regions it should break up into.

This information is then going to be fed to a program that combines the original sprite sheet and this layer into a new sheet of shrapnel and a bunch of data that ties the shrapnel to each module appearance. Then, when a module is destroyed, the module still winks out of existence, but at the same time, the shrapnel bits are placed in their starting positions and given a velocity and spin, which should give the appearance of the module breaking up dramatically...

In other news, if you’re in Switzerland or Germany: I’ll be exhibiting Airships at Fantasy Basel on May 14 - 16. More details. (Airships isn’t listed there yet, but it will be present!)

Iv'e been looking for something like this. I'm always fascinated by steampunk, especially in a game with this look to it. It's one of my favorite themes but sadly there aren't many games for it that look good to me.