We added 2 new monsters, 2 new (fantastic looking) maps, tons of polish, and added in tooltip hints to make Modular Combat more accessible than ever! Now is the best time to dive into the finest HL2 Action-RPG ever!

Posted by matthewdryden on Jun 2nd, 2009

Without boring you with too much of the details (check out the download for that information!) - I just have to say that this version of Modular Combat the user-friendly version we have ever had. We've polished up the rough edges, we've added hints to help you learn key gameplay elements.

But not only that!

We've also added two new monsters, the Antlion Guard and the Rollermine. With these two monsters come an experience multiplier based on the type of monster! That's right; headcrabs will now give less experience while Poison Zombies will give much more! We've also added a spawn variance option, as we now have complete control over how many monsters spawn where! 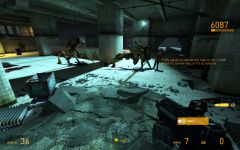 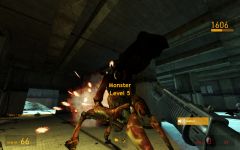 MisterBliser has given his permission for us to redsitribute DM_CLOUDCITY and DM_TECH. These maps, while complete polar opposites will be a wonderful addition to Modular Combat. With all new textures and just an overall fantastic feel for architecture, these maps are bloody brilliant - and we're very thankful that we can include them with the Modular Combat experience.

I'd like to introduce Kurt Mitchel (modeler), Evan Belman (sound tech), and Josh Van den Heever (programmer) to the Modular Combat team. We're all still getting to know each other and getting organized - but expect to see some big changes coming up in the future! We're very excited about almost all parts of Modular Combat.

Finally, do feel free to track us on Mod DB - we've made our home here and what a great place to settle down into! Check out our forums, and our developers blogs - and often! We all write at least a single entry a week. Best wishes - and see you on the servers!

Thanks for your support - can't wait to see you in the servers!

Very well made mod! I started playing this morning and I love it.

Yay... More monsters... Hopefully later on they can be adjusted so they aren't psychic and can't gang up on you from everywhere...

saves me the trouble of hunting them down

god they are annoying

Monsters always spawn with a specific target in mind - and they will hunt you because BoSS always knows where you are.

Mhm for some reason i keep randomly crashing

Also my vort minions dont seem like they want to roam

We're looking at the crash issue - it's of our highest priority. I'm very sorry that this has somehow snuck in to our release - we will have a fix up as soon as we possibly can.

Hehe, Man Hacks can be pretty dangerous at times - I agree. I like having monsters that require different strategies to kill effectively - makes the game interesting.

Good release. I love to see all this new content. Sean. I have yet to test this, But just don't use the "Good job making my crowbar ******* crash the game." Until they have a server side fix, or a new patch.

Thanks for letting us know about the crash - we're not sure if the melee weapons are the root cause of it, but we're looking into it!

Oi, I think the crash has to do with the addition of Roller
Mines and XP

We're looking at the mdmp files - which is basically a blackbox for the server. There's also a client crash that is happening. I'm not sure where these came in, but we working as fast as we can to get them resolved. Best wishes!

An amazing mod! Lot's of fun, especially the PVM with friends. Any chance for a "defend the form from infinite monsters" kind of map in the future?

Thanks Mon. You made my saturday.

been trying to play this mod for a few days now but cant get it to run always crashes at start up and there is no FAQ that i can see for this game not user friendly...