This occurred to me as I was getting ready to release v1.72 of Modular Combat: We didn't bother telling you of the last 8 months of our development cycle. And we've been playing the internal beta so much that I guess some of us kind of forgotten about all the sweet changes that has happened since we last released the mod. 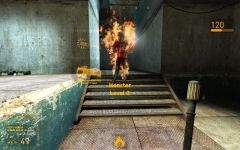 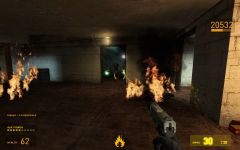 A lot has happened since v1.5 - and please, let me tell you all about it.

How have our monsters been improved?

Anyone who has been a fan of Modular Combat for any length of time knows that we love our NPCs. Whether it be a minion of our own or an agent of our combat computer, BoSS - we love em. We've made numerous improvements with our AI in the last 8 months - and they are definitely worth the wait! 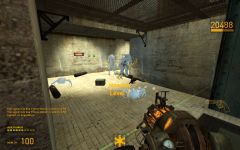 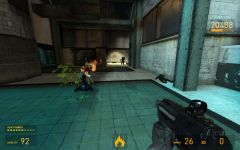 First off, we've overhauled the way we handle minions. You have better control over them now than you have ever had before! You can order them to go places by the USE key and double-tapping it will recall them to you. You may also choose short, medium, and long range stances for your minions - this will help them keep up with you or roam freely to kill for you. It's your choice!

What else has changed?

We've also added a in-game voting system, a brand-spanking-new particle system and tons of other features! And there are way to many bug fixes and balance changes to list here! To see a fully and complete changelist, check out our Mod Fidelity Mod DB blog!

So don't walk, run to your nearest download location and download the latest version of Modular Combat! Oh, and don't forget that we do have two official servers online - just for you guys to play on!

Thanks for the support! Yeah, crafting a newspost for Mod DB can take some time - thankfully, this one turned out well.

Hope to see you on the servers!

I once downloaded it just to see that there are no servers. Might try it now ;)

Same thing with me. But it's maybe worth a second try...

Ah, we do have two servers up and running! Look for "Dryden" or "The Devs are Haxing!" - I'll be happy to answer any questions that you may have.

Cool mod, it's a tad too much deathmatch for me though. Would be nice to see some objective oriented game mode here.

We're looking into an objective-oriented gamemode called "Invasion" - where you're given 3 objects to protect while the monster horde focuses on destroying them.

played it first time now and i have to admit it´s funny :D.
need some more servers and some more people playing pvp^^

Is there any servers....? so I have reason to download this.

Afaik there are two servers at the moment, you'll find only one via the server browser though (some steam issue). Visit Modularcombatwiki.com, servers are listed there.

Yes! There are two servers up and running as I speak! Thanks for your support!

This game is very full of awesome, my only complaint is the lack of certain objectives. Maybe next update have an objective based map and add a high level boss to normal maps.

We're looking into this! We are thinking about creating a new zoning system to help the division between low-level and high level players. And then also maybe a boss fight!

Well, now I've tested it and I must say I was impressed of the work put onto it, but I didn't really enjoy... A little bit too repetitively for my taste, and I didn't get anything at first. A tutorial map should be perfect (or now I didn't check if there was any, but I guess there isn't..?) for us newbies, so we, at first, get what Modular Combat is, and then understand how to play.

Thanks for your feedback. We are going to be adding some tooltips to help new players ease into the game. Accessibility is our #1 priority for the next release!

Glad alot of people should be playing now :)

Mmm, servers have been busy all day. I'm pretty happy about that!

Oh man! How I've missed all the old MC players! Can't wait to see you on the servers again!

Good to hear! Can't wait to see you in the servers!

pls can somebody write some servers here