Before we get started, I'd just like to thank all of our players for your support in this last week. It's because of you that we had such a successful launch week. Over 400 accounts have been registered between just two of our official servers!

To celebrate a great start, the Mod Fidelity team will be hosting a "Double-Experience Weekend" across all official servers! If you were hesitant about trying out our mod before - now is a GREAT time to get started!

We've been testing a server-size only release across our official servers where we have fixed a few exploits and bugs! Here is the quick rundown of what we've changed:

We've been able to make a lot of these changes by changing our server config files. For the layman, this means that can tweak and balance our own game without requiring you, the player, to download a new update!

This also mean that people who run servers can essentially make their own version of Modular Combat! Through server variables, keyvalues, and other methods, we've been able to control every gameplay balancing aspect with just a few keystrokes.

There will be a tutorial coming soon that will show server owners how to tweak their own servers. In the meantime, feel free to check out our forums here on Mod DB, and if you have any questions at all, feel free to ask!

I Can Haz Turrets?

Modular Combat v1.75 (up-and-coming) will feature a new deployable module - Turrets! Players will be able to deploy up to 2 turrets. And get this: they can't be knocked over. That's right, Modular Combat turrets can hold their ground - but after they take enough damage, they will blow up. 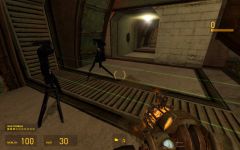 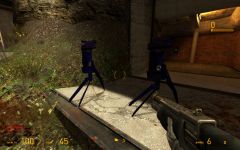 We were going to include this in a bigger update, but I've asked specifically for this module to be bumped up to our next update as it's one of the most requested on the servers. I hope you all will enjoy it!

The crew over at Podcast 17 graciously brought me onboard for a short interview last Saturday - and I'd like to take a moment just to ask everyone to go subscribe to their podcast. And if you're a developer, you should already be listening (get going already!).

After a great amount of thought, we have decided to shut down the Modular Combat Wiki and move the homebase of Modular Combat to Mod DB. This means that our new forums are hosted right here! All our new media, dev blogs, and everything Modular Combat can be found right on the main Modular Combat page!

So go ahead and check out our forums! Leave a suggestion, report a bug, or just talk about Modular Combat! We at Mod Fidelity are a big fan of what Mod DB is doing and we'd like to support them as much as possible for providing us with such a great community!

Thanks again for all your support this week and remember, we developers love to hop in-game with you players. If you ever see "Matthew Dryden" or "Winston" ingame, say hello! Don't feel afraid to ask a question or two!

And when is this double exp weekend you speak of? This weekend?

Last I played this it was two releases ago....looking better than ever. :D Deployable turrets sound awesome!