Modular Combat receives a balance update and we skip a release number AGAIN.

Posted by matthewdryden on Oct 1st, 2010

If you can call Modular Combat's PR anything, it's flashy.

I push the PR as much as I can because I believe having a good-looking release can go a long way. But I think I've gone too far and really have forgotten about what Modular Combat is really about: Fun.

That being said, the following release is focused on bringing some of the fun back to creating & designing characters that have a unique set of skills while giving more power to the low level players.

I'm just going to say it: Almost all passive modules have been removed from Modular Combat.

Take a deep breath. I know, it's a huge change. Now think about. What was one of the biggest problems in Modular Combat? Passive-stacking tanks. When a player hit level 25, they were pretty much impossible to kill, right?

Modular Combat 2.0.3 is all about smoothing out the power curve, taking away the grind, and making levels matter again. We've also taken away Recharge altogether and given players a passive auxiliary power regeneration and provided a new item: Red Batteries (worth 30 auxiliary power). Oh right, and we added a buff bar. 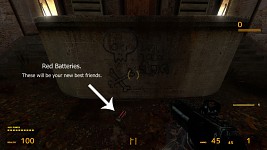 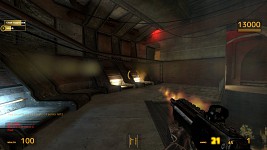 In essence, we want to make strategy & tactics actually matter. That being said...here is the full changelist:

Modular Combat is finally getting ready to take that leap into getting our own look & feel. Here are the spots we are currently looking for:

If you're interested in helping Modular Combat get to the next level, please send us an email at modfidelity@gmail.com - thanks!

Well, I'm excited to try this, mainly because of the monster changes and the new take on playstyle, but I would not have removed regeneration altogether. I instead would have made it so that you don't start regenerating until it's been about 5 seconds since you took any damage. This is because even if you had low-level regeneration in previous versions, it would still be hard to get your health back without dying.

However, I suppose this will make the HEALD module much more popular and useful, since it will now be a necessity for most balanced suits. That being said, I'm actually starting to like the idea of replacing regen with HEALD. It will heal you much faster, but require you to pay close attention to your health.

Gonna go play ModCom for 3 days nonstop to see how it is.

The official servers have been updated to fix the crash. If that works better, we'll release a server-hotfix later.

it is still buggy unfortunately ='(...
*Zumba Master server from UK is corrupted, and we cannot create profiles on it (therefore we can't play)
*Nachos and Cookies is still on 2.0.1 and I don't know who is the server owner
*Finally, the last server Obsidian something, works just fine, but it crashes from times to times too... The first time I joined, I was able to play for 2 hours without problems, then it crashed, and since then, it was crashing each 10-20 mins...
I would love to set up my own server, but that's to VALVe (or me, idk -_- ?), when I try to Launch Source Dedicated Server tool from Steam, no matter what game I try to launch it hangs up after the "Created dedicated server" pop up window. I contacted Steam Support, but still no response for already 2 days. I cannot set up a Listen server either from the menu somehow. My ports on the router are open for sure... I use Windows 7 with ESET Smart Security 4 (it someone would try to join my server a window would pop up of incoming connection, but nothing shows up)... I tried using sv_lan 0 then, restarting the server, but doesn't work either. My friend have the same problem too. I will ask a friend from a hosting company if he do a quick test for me tomorrow afternoon.
Thank you

this should be converted to a half-life 2 deathmatch mod since it now runs on the ob engine. since hl2dm is free there will probably be more players

Alien Swarm brought Orange Box free to everyone awhile ago.

The base aux recharge isn't enough to maintain most of the modules! I run out way too fast...

cool update,
if just for the changes to plague tbh

Not that I'm not happy for this new curve smoothing but soem of the passive modules seemed rather necessary such as Aux Regen or Shields.

i love this new update much more balanced, though i hope you bring back some of the passives, but with detrimental effects. :)

A More balenced update sounds good.
I'll check it when I next get the chance.
Excellent work.
Keep it up :D

I wonder, have they fixed the stupid fire lag, or that weird lag that occurs when you play this mod? It affects me mainly because of some kind of ep1 content where there are performance issue on certain things.

Of course, it supports Orange box, but that doesn't mean that certain content aren't gonna be performance friendly...

My laptop can easily handle HL2 on max, it's just the darn lag from random stuff!

Soldier is not Amused

It makes me sad, I loved the passives, that said, it makes me happy, it needed to be done

When i first saw this mod i thought it sounded so cool, reminded me of the runes in Ctf Quake.
So the first thing I wanted to know was where can i find the list of the Modules and what they do? But i cant find them! I checked all your sections here on Moddb, i checked your site, forum and even downloaded the full Setup file to read the readme BUT NO info about the most important part of the mod, the modules!

Can you please post a big guide here and on the site of all the modules please! It would definitely bring more users to this mod, thanks!