Post news RSS Mods - A selection of the most popular mods!

A long lineup of mods, in celebration of the modding API's upcoming release!

With the Minecraft modding API just around the corner, I felt it would be a good idea to review some of the more popular mods of Minecraft. I'm judging "popular" as the ones most talked about and most used, so please, do not feel like it's a personal insult if I don't list yours!

At time of writing, all of these still work and have instructions on how to install them in the forum posts linked. Some however conflict. Please note, you should backup all world saves and your Minecraft files before installing any of these mods!

The video pretty much explains itself. This is a fairly new mission creator for Minecraft. in it, you cannot destroy blocks, but instead must battle your way to the heart of a temple. The tools have been released, so user-created scenarios are possible, and some have already been made!

I'd suggest everyone try this mod, at least to see how adventure mode will look like.


What's that? You feel isolated in singleplayer? Then this is the mod for you!

This mod adds a variety of new characters, including pirates, knights, wanderers and more!
It also adds a nether mob, which can deservingly be called overpowered.
It also adds horseback riders!

Unfortunately, we've been hearing some bugs about this mod. something about a "Herobrine". So, look out for that.


This mod is everyone's decoration and farming prayers, answered. 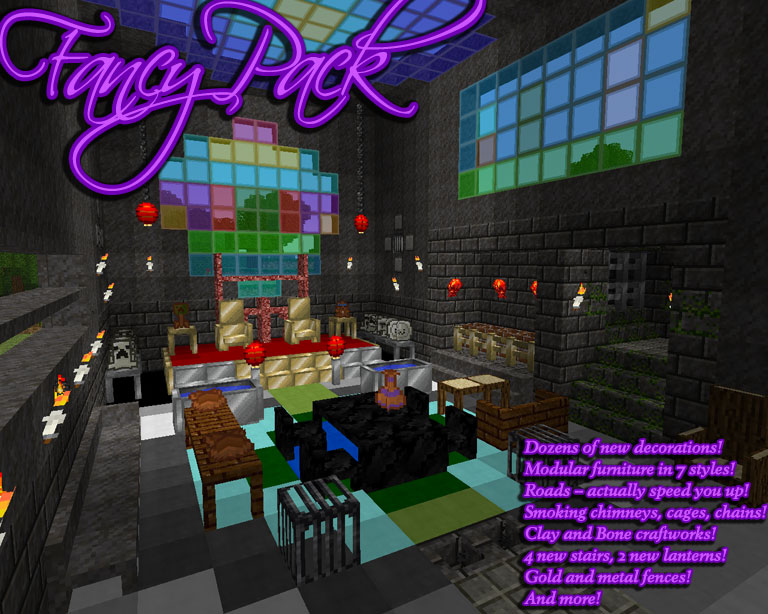 The mods made adds furniture, decoration items, stained glass and better farming for many items, allowing flowers, pumpkins and mushrooms to all become renewable!
Other additions include faster obsidian mining, 1:1 ratios with lightstone and its dust, torches being placed anywhere (even on other torches!) and even a chance to get grass seeds, allowing for easy transportation of grass!


Who here has a laptop?

I can tell you right now, I am typing this news post from a laptop. I shall continue to use laptops as long as possible.

if, like me, you too use a laptop, then this mod will appeal to you a LOT. The mod increases framerates, sometimes adding 20FPS to your game!

The developers are talking to Mojang to help them with optimisation, but in the meantime, pick up this nice little mod. It'll be worth it!


303 has been hard at work this year, making mods that change how people play Minecraft. In essence, it is all about prefixes, and some upgrades for transport. prefix arrows and skeletons using these arrows are introduced, allowing for tree-growing arrows, explosive arrows, slime arrows and many more kinds.


This is reason enough to get it, but it also adds two more features. the ability to walk up 1-block high ledges, and a grappling hook!


This mod is a great mod for many others. It adds a minimap to the top-right of the player's screen. As well as that, you can specify "waypoints", and the map tells you which direction these points are! A clever little addition to Minecraft, especially for those with bad directional senses. 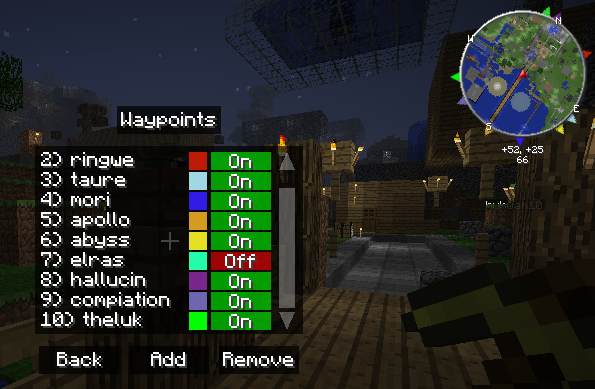 This mod has slowly been snowballing in popularity. It adds many, many new creatures. It adds lions, ghost-like creatures, wolves, foxes and even rabbits/birds!


This mod is used fairly widely for HD textures. It makes the lighting progressive and smooth, and allows grass to grow down to other grass blocks. 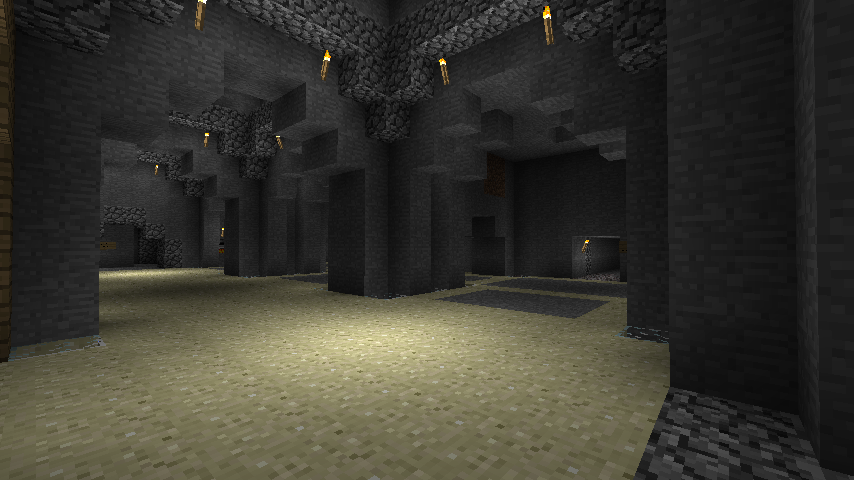 There's not really a lot to say about it. only ways to show its affect. Definitely worth a download for those who prefer progressive lighting.


I'm sure many of you felt sad when Capes and Ears became exclusive to Mojang, and special users. I know I did. Thankfully, these guys are doing their best to put that straight!
This mod allows you to add the cape and ears, with just a little bit of knowledge about unzipping files needed! 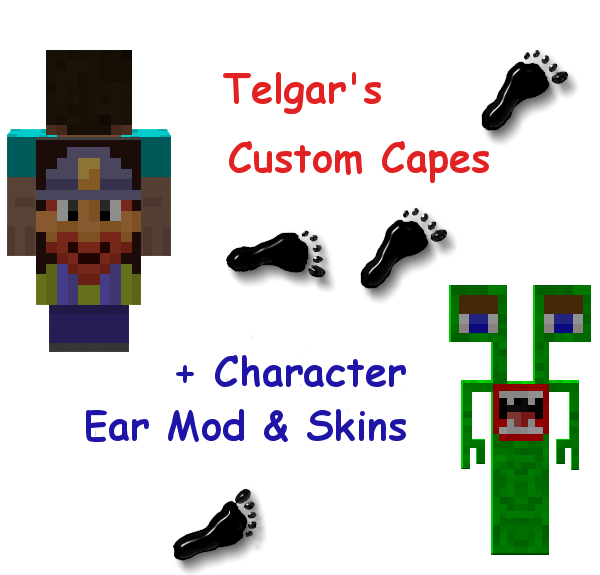 it also includes many, many pre-set capes and ears just waiting to be worn by you!


While looking for mods, this one shone out among many others. What it does is very ranged. It can make obsidian tools, that last forever, with a cost to strength. It also adds many other things, such as giant creepers, throwable TNT jelly, nether-based dragons and hounds, prefix creepers, runes and much, much more.


This is Minecraft for those who are left unchallenged by the "hard" difficulty. For the ones that think the Nether is a child's playground.

You Are the Creeper


Rotten194 wrote: "No! I must kill the creeper" he shouted
The Menu said "No, Steve. You are the creeper"
And then Steve was a creeper.


Since the dawn of time, Man has wanted to know, how do creepers live? What do they do in their spare time?

and so, this mod was made. You are now a creeper.


I cannot really see anything else you'd like. The mod is very much a test, and many things are still buggy, but it all works.

The mod suggests all is still possible, such as mining and collecting (hitting promised to be replaced by headbutting!). However, a new feature was inevitably needed. When pressing E, expect to destroy anything within a four metre radius, and to lose all of your items. That is of course the classic explosion trigger.

Future plans for this mod involve all hostile mobs to become friendly, hostile miners and leading armies of mobs. This promising mod, starting from the 30th, already has a big amount of interest.


I simply cannot make this a decent overview without including this mod.

The "Rana" mod allows a new mob, "Rana", to spawn. This mob was once idolised in Minecraft history, and still has a dedicated fanbase to date. 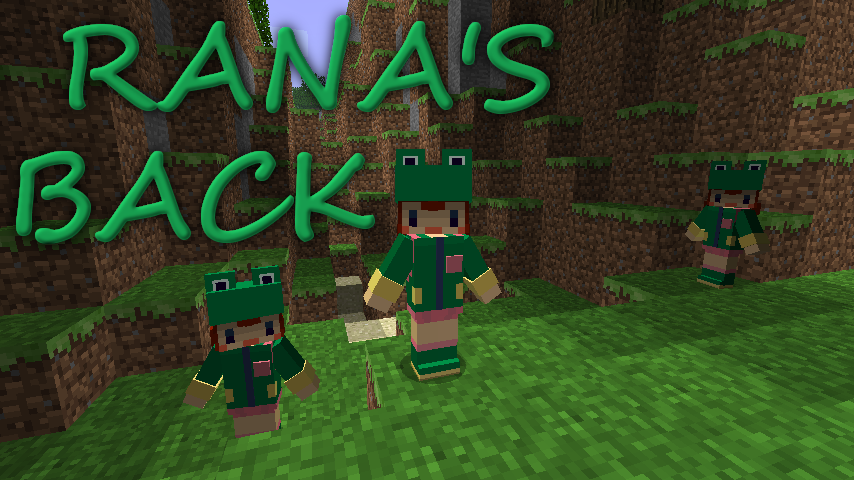 Granted, the mod does little to actually add to Rana, but in the end, that is what makes it so reminiscent of the old Indev days. Rana does have some perks, such as a one-in-eight chance to drop apples or an even shinier object.

Rana's primary purpose is bait. Monsters feel so distracted by Rana, they lose interest in you and attack her. Using string, you can "tether" them to yourself, to provide walking bait at night.

While it's a sort of primitive take on Rana in-game, what with the tethering and using as bait, it is a nice way to present a callback for fans.

That's my lineup of mods I feel should have recognition from the community. With the approach of a modding API, lets hope these mods can continue to deliver content uninterrupted. in the meantime, please, enjoy these mods! Lets hope mods only get better after the modding API.

I want to thank all mod creators. without your help, we'd never get this much innovation into Minecraft! Keep up the good work!

Mods are alright in my book.
Vehicles...

Cars? Heck no, I want planes! Bombers, things I can build cannons on!

When Notch introduces movable blocks you can have that, but I think that's a long time from now.

I await that day pseudo-patiently.

I would take that Enterprise the one guy made and make it fly :)

I'm sure everyone has TONS of ideas for mods. Hopefully the complete version of Minecraft will allow easy modding and customization.

PS The forum link for optimine leads to the same place as 303 please fix this as I would like to try this mod.

Found the forum if anyone else needed it
Same goes for Mo' Creatures here:

sorry for that! I fixed it quickly before school, much to my parent's disdain. thanks for pointing that out!!!! =DDD

eh, with guns, it seemed to be a little bit 50/50 on how good it was in mixture with Minecraft's style. not to mention, the main page was stretching as-is. it looks like an ok mod, but I felt the mod still needed a tiny bit of tuning :)

Nice to know notch officially supports these mods so well! thanks notch! =D

he technically doesn't support these. this article is made 100% by me. until the API, they do not support any mods.

*giggles* "Smelt" is pronounced "Melt" Kizzy <3 But thank you for the giggles. (Also; It's = Its, when it's possessive)

Great looking mods! I might even try a few of them.

I searched the Wiki, to see if it was an inside joke, but I found nothing.

Some of the links for a few mods lead me to the wrong threads :X

Ah sweet, i feel so honoured that my crappy mod is in such a list of epicness :D

yes. it's annoying when bugs happen, isn't it? so frustrating and not intended at all!

also, your mod is FAR from crappy :P

Awesome, my "King's Mods" is up there!

I feel so honored :3

you made giant creepers.

I hope someone makes L4D Versus like mod with zombies, creepers and etc. =)

this article made me aware of Herobrine, never heard of him before

do you know the server plug in for this "bug"?

Someone should make this "bug" a standalone mod.

What? that would be silly!

I can't wait for real mod support. That'll be some serious fun.

Can you show us some cool server mods next?

unlike others, I am not a servery person. sorry! if you pass me a link to some, and a video/image of it in action, I'll happily make one! ^^

What exactly is the API?

granted that you mean the to scale (i think it was) Enterprise-D v16(or what ever they are on now) this: -V

Edit: how did this end up down here? meh. fawk eet.

i take it that was a reply to my comment

Since the one option in Minecraft is "Mods and Texture Packs" does that mean that in the future we will be able to load a mod separatly without it actually modifying our regular Minecraft. Kinda like how, say, a Half-Life mod acts as a completely different game with it own saves, etc.

I did and whenever I tried to insert the mod into the Minecraft application it says:
! C:\Users\James\Desktop\Minecraft.exe: The archive is corrupt
I've downloaded it several times but still get the same thing.

nonono, the JAR file. not the exe. look up how to find Minecraft's JAR file.