Today we review a new colorful game, Minimonsters Crush. It is a simple yet addictive game from the newly created company HN Games, aimed for people who doesn't like wasting much time on games but enjoy a bit of challenge specially against your own friends. 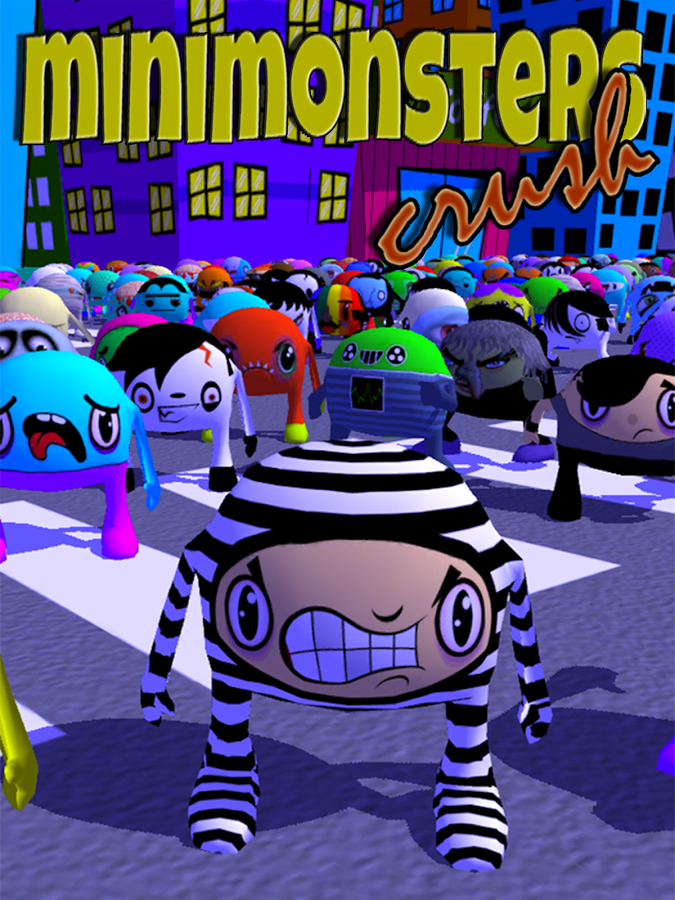 The game is, as said, very colorful and cute, and good enough for a mobile game. No complications here from HN Games; the game could have used a bit more animations or joy, but may overcharge the system. We mark this section as ok without much glamour. 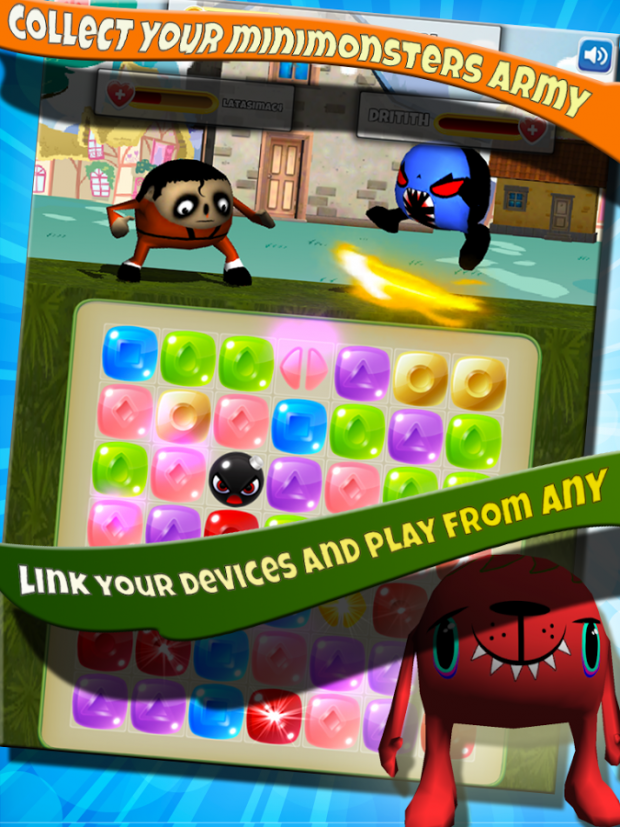 A strong point in the graphics is the overwhelming number of different minimonsters available, 150 in total. They have funny names and looks, and collecting them is one of the reasons to keep playing. Their fighting animations are good for the mobile environment; maybe we miss unique movements for all of them but may be too much of course.

I think the best thing we can say is: damn HN Games for the theme song. We have been humming it for about three days, we liked it a lot. Apart from it, the sounds are the expected ones in these kind of games. More variety maybe?

HN Games has not discovered the wheel here. They have taken a successful idea (Candy Crush comes to mind while first playing this game) and added enough changes and improvements to feel we are playing a different game, while being comfortable enough to start playing from minute one without learning new playing styles. 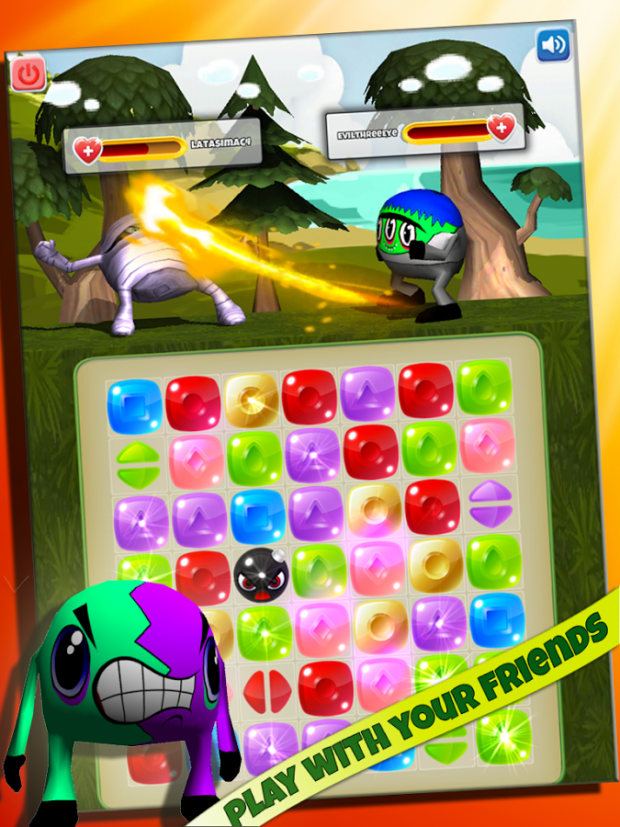 Simplicity is the key word, in our opinion. When first starting the game, we are presented with a simple form asking for our name in the system. Be careful because your nickname cannot be changed from now on. Once logged in, the main screen is presented, with three clear options: practice, play and friends.

Practice acts as a tutorial. You choose one of the minimonsters and then enter a game where you can play against a simplified AI. New players will enjoy this mode, but for a veteran Candy Crush may be unnecessary.

When you feel comfortable enough to enter the arena, you can begin searching for random human opponents in the Minimonsters network. Happily, you can play any human opponent no matter the system they are playing on - in our tests, we had an Android mobile, an iPhone 5 and a Windows phone, and we could face each other without a problem. This is something very needed and missed in other multiplayer mobile games, and we welcome the effort from HN Games in this section, though the game seemed a bit unstable in low signal conditions - understandable but may be improved, in our opinion. 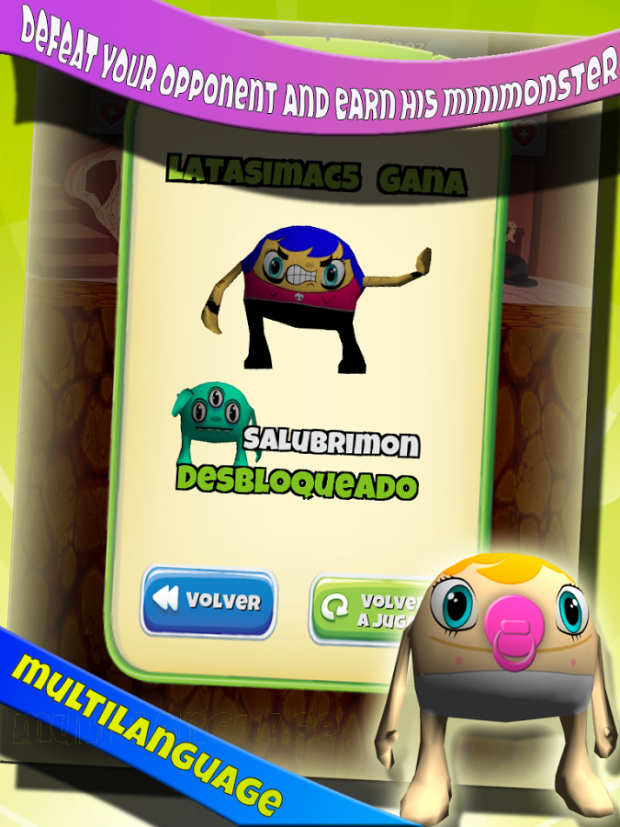 Now, to the gameplay. It follows the rule of easy to learn, hard to master. Your task is combining three or more pieces simple, right? The thing is, there is another human in the other side, and the faster you destroy the pieces, the faster his or her minimonster loses its life and, of course, destroying more than three pieces in a row (combos) will make your minimonster hit harder, ending the game faster for your side and collecting your enemy's minimonster as a bounty! It is incredible how this simple premise will keep you fighting and fighting your friends, playing one game after another. Surprisingly addictive.

Well, in this review we have said many times that the game is addictive, and we can say no other thing in this section. The game will keep you playing for days, collecting monsters and destroying your enemies. It is so simple getting to play other people with two clicks that you will be playing game after game even without noticing. We really enjoyed it.

To keep you hooked on the game, you will achieve a military rank, and the game will try to improve the enemies you fight based on your actual rank. The more people you win, the harder your opponents will be.

Not everything is good. We miss some kind of achievement when you collect all monsters, and the communication with the enemy. Maybe a simple taunt after pwning them? It takes something from the victory when you can't tell anybody.

The very strong point is the compatibility between devices - you can play against any kind of mobile or use your account in any place, which is something to be thankful. It will keep you playing for a long time, and this is not something we can say about many games.

On the bad side, may seem too simple for some people, and of course, it is not very original or innovative; based on a good idea, it brings it to an improved level - if you like puzzle games and challenging your friends, it is your game. If not, it is not.

To sum up, Minimonsters Crush is a well rounded game, based on a successful one but adding a very addictive and funny multiplayer layer. We recommend it.

Great Game. I love it :)
Try it with your friends. You can not stop hehe .