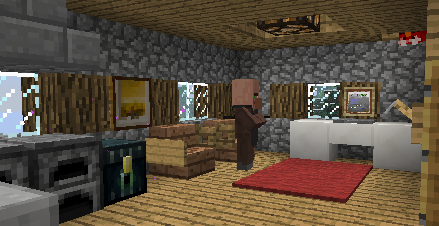 Update: A ‘c' snapshot has been released and will be downloaded automatically by the launcher. Scroll down about 30 lines for the changelog!

Bug fixes. Fug bixes. Whatever you want to call them, we have them! Get your hot fresh Bug Fixes here! Big ones, small ones, fun ones or annoying ones; We have it all! Get them while they're fixed! Special discount, 50% more bugs fixed with each bug fix! You can't miss out on this amazing deal!

There's that red thing again.
And that's a very interesting image in that item frame. Kind of looks like the Main Menu of Minecraft.

Well spotted. I wonder what, if anything, those are.

From what I can tell the red things are some sort of squigly blob, that can walk on any surface and appear to hide... so my guess is a stalker slime.

From what I've heard (dunno if it's true or not) it's the Minecraft skin of one of the people working on the Modding API, or something like that.

That Item Frame could be a screenshot.

Is... Is that a pressure plate on the same tile as that item frame?
Or am i just seeing things?

I think the Elmo got got added....... NNNNNNNOOOOOOOO

Expect some red foxes in the game, that's what i do

Just for anyone interested, I decided to do my own research on what this red elmo looking thing could be, and it looks like guys at the Minecraft forum beat me to it.

Here's a link to it: Minecraftforum.net

I think we should actually be asking, how is the elmo skin character even upside down? How do you even do that in-game?