Oh God. As if Minecraft wasn’t terrifying enough, its creator Notch has just sent us screens and info about a new monster type he’s adding in the Minecraft Halloween Update on October 31st. --PCgamer

Oh God. As if Minecraft wasn’t terrifying enough, its creator Notch has just sent us screens and info about a new monster type he’s adding in the Minecraft Halloween Update on October 31st. The Ghasts are flying cuboid jellyfish that shoot fireballs at you, blowing chunks out of the world around you and setting it on fire. Luckily, they’re only found in hell. And Notch has told us exactly how to get there, why you’d want to go, and how portals to this new dimension are built. Here are the details, along with two exclusive shots. 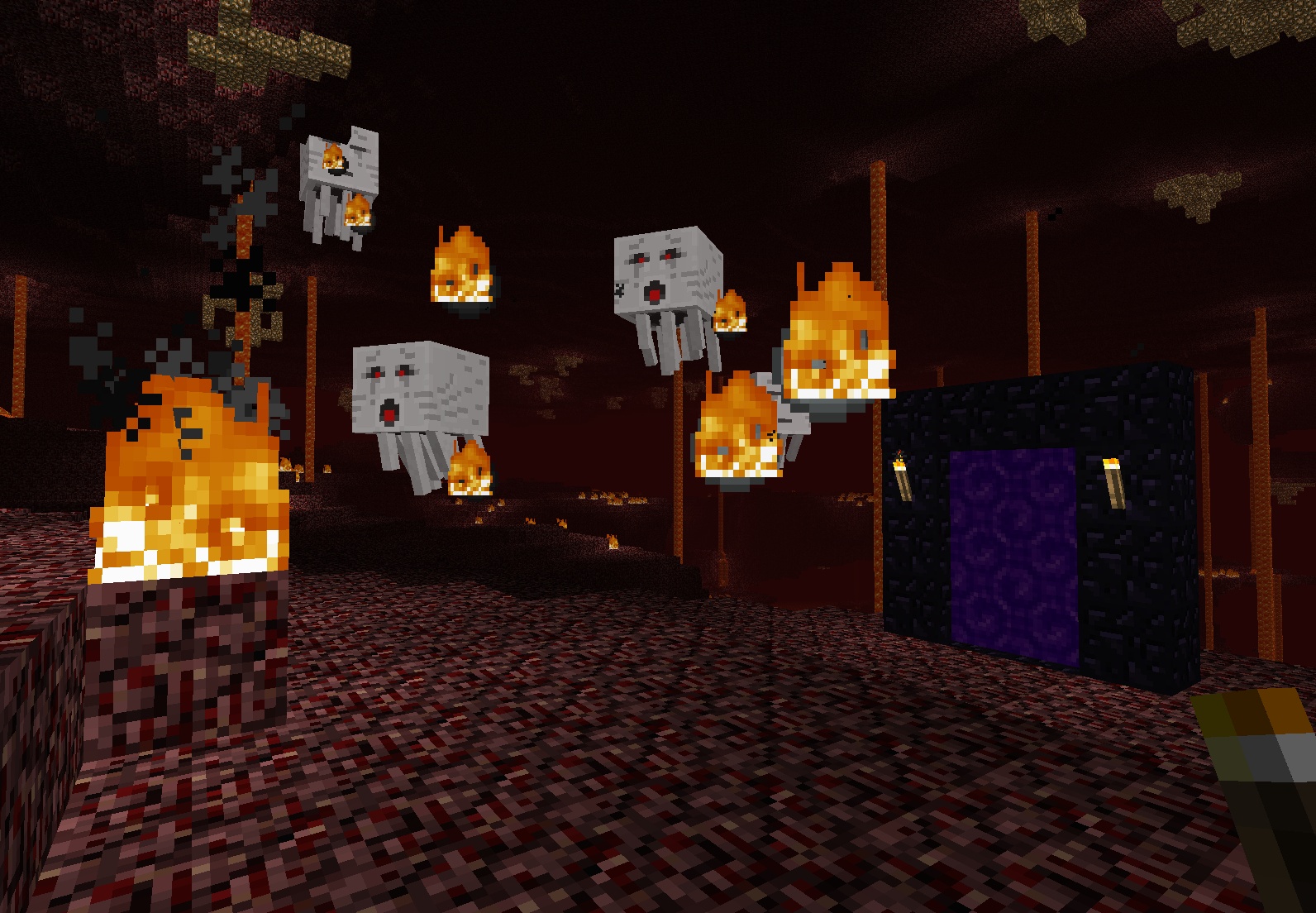 Welcome to hell. Or rather, welcome to the fiery dimension that Notch is thinking of renaming to avoid offending anyone’s religious sensibilities. It’s another world that doesn’t exist in the same space as the beautiful randomly generated landscapes we’ve been exploring and building on. The red rock it’s made from can burn forever when ignited (though the player can douse them), so with a few Ghasts around it can get hot. But if you can get there, any distance you travel will take you 16 times further in the real world. It’s essentially a quick but dangerous travel system, and to use it you’ll have to build a portal.

That’s what the black doorway with the purple swirls is in the screenshot above. You make one by building a frame out of obsidian – a hard and rare block type already in the game – then setting fire to the hole you’ve created; an awesome way to get anywhere. When you step inside, an identical portal will be created at the equivalent spot in the hell dimension, unless there’s already one somewhere near. You pop out of that, and hope there aren’t any Ghasts around.

To get back to the real world, you’ll have to create another portal – or use the one you came through. Make one 10 meters away, and you’ll find yourself 160 meters ahead in the real world when you get back. It ends up as a way to bookmark and travel between hugely distant places in Minecraft’s sprawling worlds. When a landscape can be up to eight times the surface of the Earth, it’s handy to have a quicker way to traverse it. The fast-travel aspect may tie into traditional notions of hell being beneath us – if hell was nearer the center of the Earth, moving a short distance down there would translate to a big distance on the surface if you came straight back up. 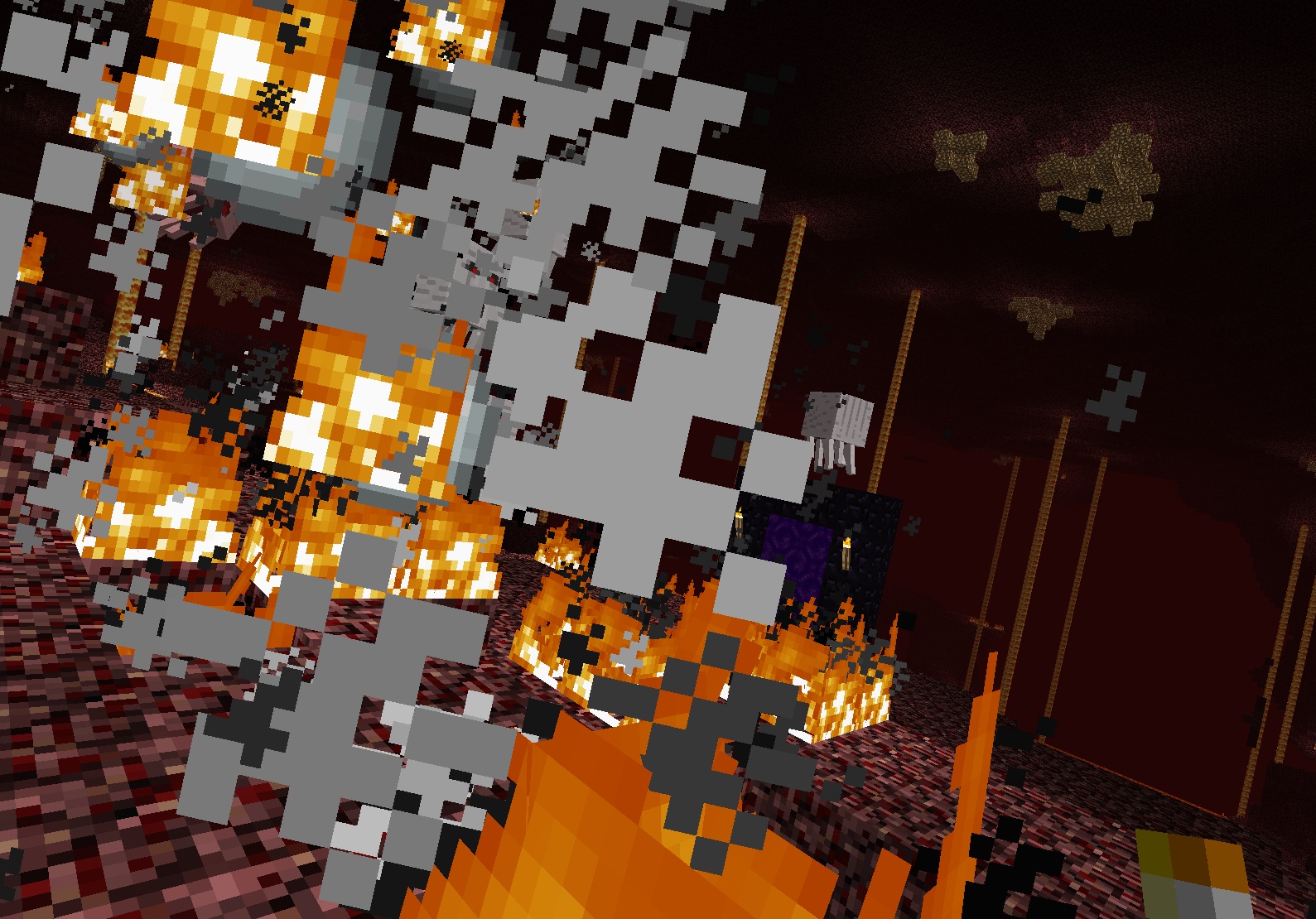 The Halloween Update will also add six new block types – there’s a gold-coloured one we’re nicknaming Australium in these shots – and all but one of them will have some new function. The surface world will also get a lot more interesting: the game will now generate snowy stretches, desert areas, forests and other climate regions all in the same world. It should make exploration even more exciting than in the uniform worlds we have right now.

Notch is kindly working on a preview version of the update for us, and we’ll have much more info and impressions of it here on the blog once we get hold of that – subscribe to our feed to be the first to know. Minecraft is free to play in Classic mode, or €10 to buy the full game with Survival mode and all future updates. Already profoundly worth it, and the game is only in alpha. It may end the world when it’s done. Notch’s development blog is also a great read.

this update's going to be EPIC. :D

And i lol'd when i readed Australium. TF2 much?

I want a jungle climate :)

That would be awesome aswell :)

I can not wait. This update is gonna be awesome :)
I wonder how I can keep pet Ghast or even what you get from them for the matter.

i cant wait, now i just need to find some obsidian hahaha. does it really have to be Australium? i have horrible memories crafting all my items because of that golden wrench. tf2 was awesome but now has left a bad after taste to what they have done to there long time users.

The portal idea is absolutely genius.

hope multiplayer damage will be fixed and il be happy:D

Looks to me like I found are to-be replacement for torches, as Notch planned to make them only a temp. light source in a future update, we can use the blocks that burn infinitely :D could also use Lava..

"It may end the world when it’s done."
Know why? The world's economy is going to fall, and Notch will be as rich as no one has ever been!

This just in, we will have another slime issue. as long as there is 4x4x4/5x5x5 space anywhere in hell, a Ghast can spawn :C light does not matter.

As soon as people get their hands on the ghast texture they're going to reskin it into the cacodemon from DOOM. :p

Now the air is not safe anymore, for there might be a creature lurking...

the air IS safe in the normal world, just not hell.

considering you need a diamond pick for obsidian, you'll be experienced when entering hell.

GAAAAH. I thought creepers were terrifying. The Ghasts will give me nightmares. XD

This update will be awesome.

The Minecraft machine rages on.