We've just got a preview version of the massive update that Minecraft is getting this Halloween, including portals to the hellish Slip dimension, worlds with different climate regions, weird new materials, flying cuboid jellyfish, and horrible damned souls with half their flesh falling off. Here's what it's like to play, as well as lots of shots and a video of how you enter the Slip.

We've just got a preview version of the massive update that Minecraft is getting this Halloween, including portals to the hellish Slip dimension, worlds with different climate regions, weird new materials, flying cuboid jellyfish, and horrible damned souls with half their flesh falling off. Here's what it's like to play, as well as lots of shots and a video of how you enter the Slip. 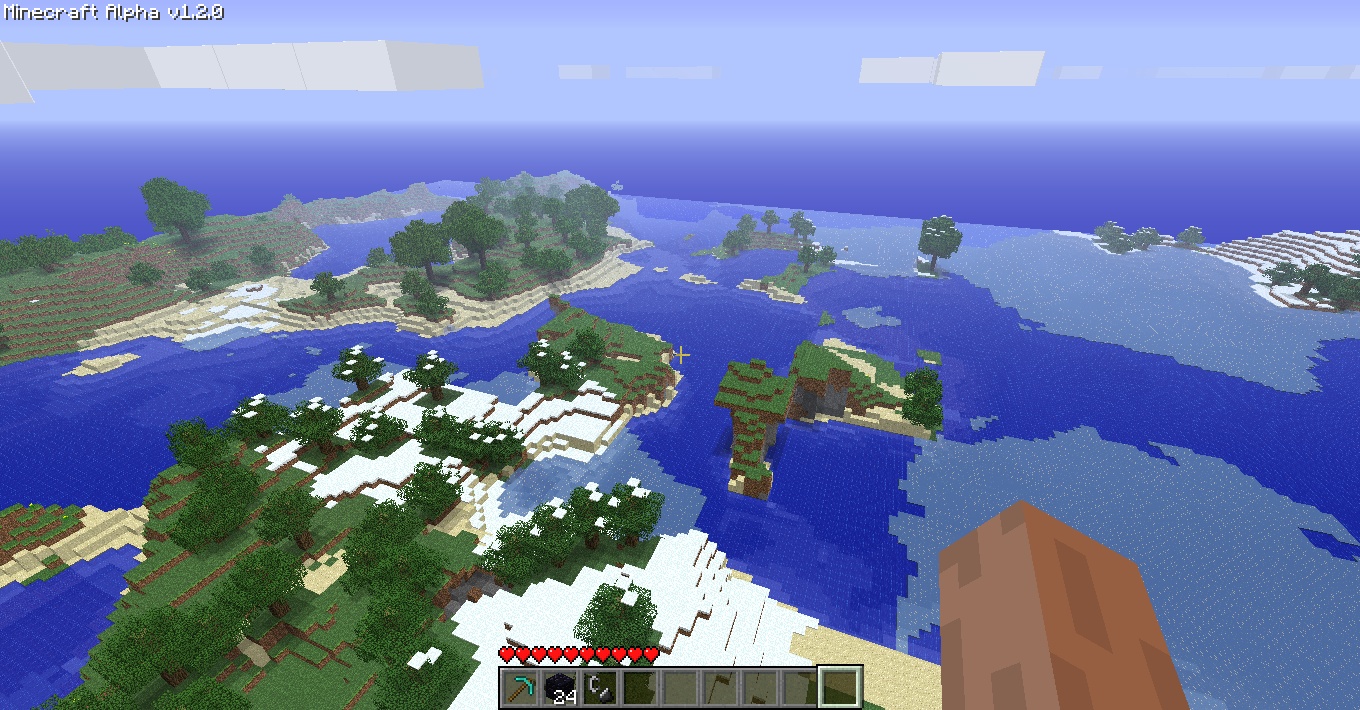 When you start a new world in Minecraft now, there'll be something slightly unfamiliar about it. Even if you can't see a snowy stretch or desert ahead, there are subtler climate types, and the grass is just a duller, more realistic shade of green in most areas. As you approach a snowy region, it loses even more colour, and the leaves of the trees are less vibrant too. There are eleven different biomes – region types – but the ones you really notice are grass, desert, snow and forest. Learnt the dumb way: don't start a fire in a forest region.

These regions also feel a lot bigger on foot than they looked in the video. There are some smaller patchy bits of snow or sand, but creator Notch says he's going to be making biomes bigger in general too. It's not like every world is a patchwork variety pack of terrain types right now – in some worlds I've created I've never found any snow or desert regions, just different types of forest, water and grassy terrain. There's still a lot of variety between worlds as well as within them.

Notch also sent us a map of how Minecraft generates biomes and where it puts them. This is one full world: 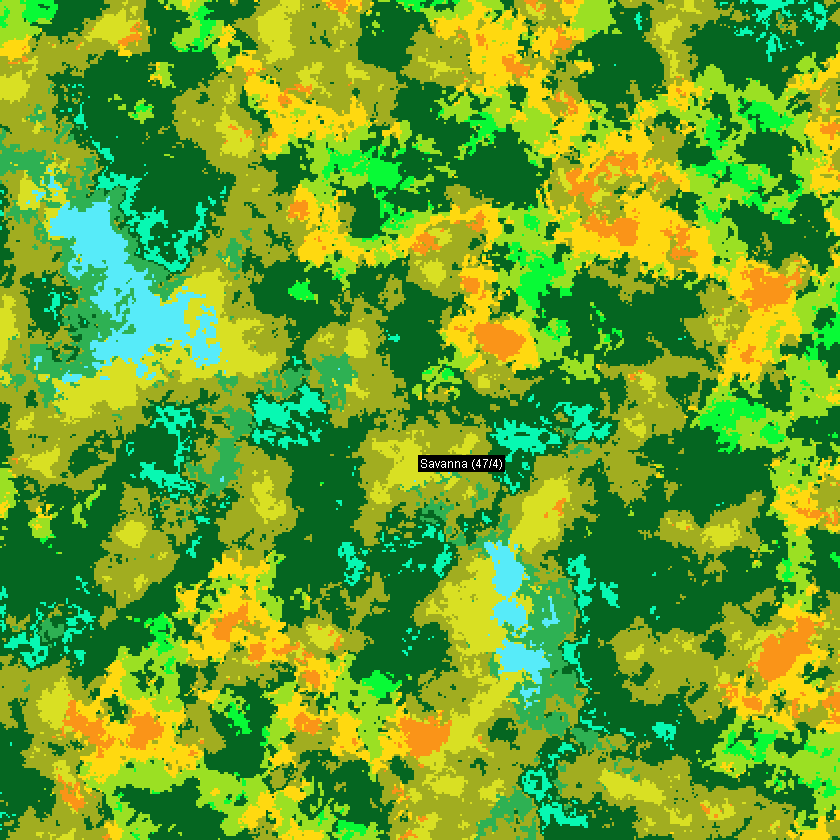 The upshot is that exploring is twice as exciting now, because what's over the next ridge could be completely unlike what you've seen of this world so far. I feel like I've seen weirder quirks, too, like a lake of isolated trees on tiny islands. And then there's the other place to explore: hell.

Hell is now called The Slip, presumably a nod to slipgates. You build them by making a frame of obsidian four blocks wide and five blocks high, leaving a 2×3 hole, then setting fire to it. As you'll see from the video, it does need to be a full loop of the rare rock, so you have to dig out the floor as well.


Yeah, so going through slipgates didn't work quite how I thought.

At this particular spot in the Slip, I don't run into any of its inhabitants. But later, I met my first Ghast: floating jellyfish that shoot fireballs at you. They're much, much bigger than I realised: several metres across by the looks of it. But they keep their distance and they're almost always floating in the air, so it's hard to judge. Sometimes it feels like they've changed size.

It's pretty much impossible to get close enough to hit one with a sword, and I think in most cases you're better off avoiding them than fighting anyway. Their fireballs hurt if they hit, and make the world trickier to navigate by setting fire to chunks of it, but they're actually a lot easier to avoid than I'd feared. They don't seem to predict your movement when aiming, so you can usually run away.

That's when I bumped into the other inhabitants of the Slip, the ones we hadn't seen before. You hear zombie gurglings and turn to see this: 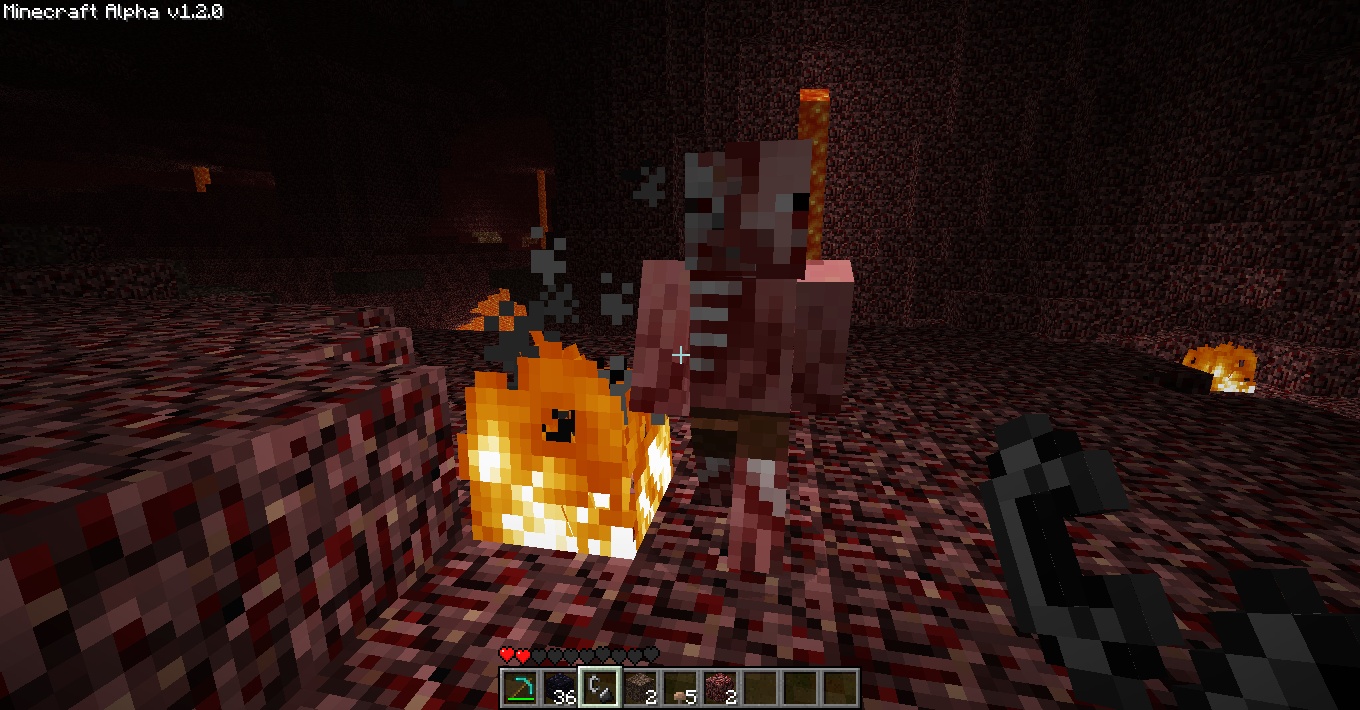 It's a Zombie Pigman. They're horrible to look at, but actually not hostile: you can run right up to them and they'll just stare emptily at you. Of course, I did that with three Ghasts on my tail, so shortly after the poor guy was hit with a fireball, set alight and killed. Fact: they drop pork chops when they die. They also oink like a pig occasionally.

I quite like them, so I wouldn't normally do this, but for the sake of experimentation I had to try attacking one. 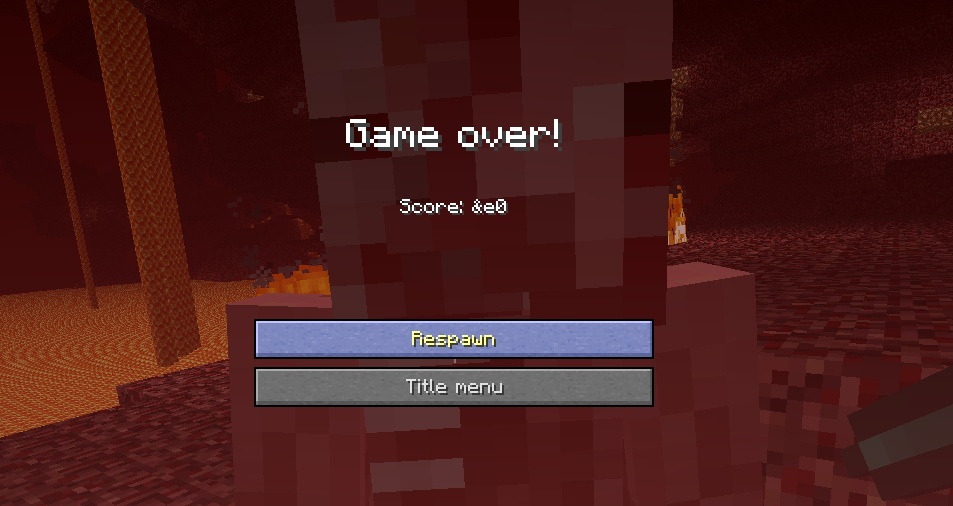 Admittedly I didn't have a lot of health when I did it, but the result was a flash of pain and an instant ‘Game Over’ screen. In the background, the thing's head was just gibbering on me, apparently biting me over and over.

Then a Ghast shot him with a fireball and he oinked. Hell is a strange place. 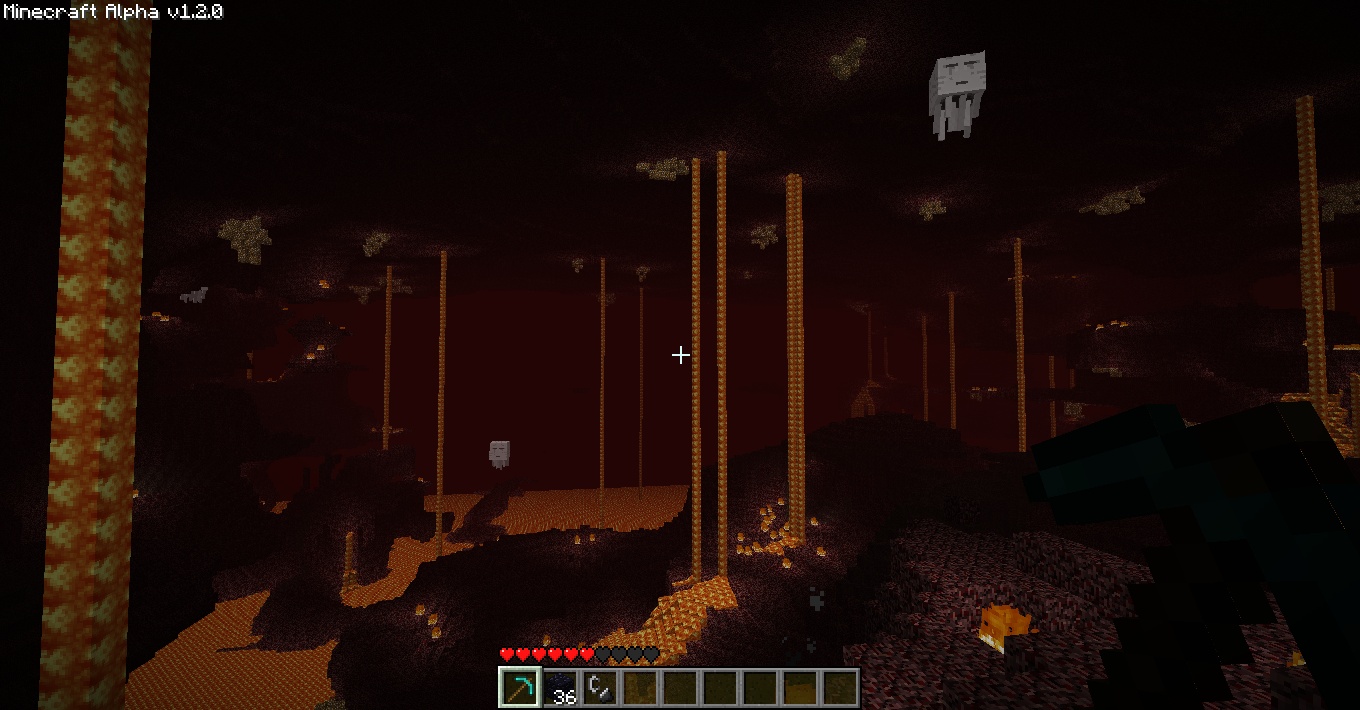 The Slip is fascinating: we just haven't seen randomly generated caverns this big before. It's full of weird vistas of vast lava seas, rippling cascades of the stuff spilling down rocky slopes, and strange overhanging chunks of rock. It's pretty dark when you're not next to lava or on fire, and unlike the natural world it's not all gently rolling hills. Any time you're going down a slope, you have to be very careful that there is actually land beneath you: at any time it might drop off into a massive cavern below.

The standard rock in the Slip pops with a single strike of a diamond pick, and its special property is that it never goes out if you set it alight. I managed to get up to some of the weird gold deposits we've seen in screenshots of this world: they shatter like glass when mined, but they do drop a block you can collect. And I've also found a third type of Slip rock, one that slows you down when you walk on it, as if it's some kind of sticky mud.

There are three more I haven't encountered yet, and I haven't tried smelting or crafting the ones I have discovered – I'll update here when I find out what if anything they do. In the meantime, here are some more shots of the Slip. I'll try and get a proper video of exploring it too. 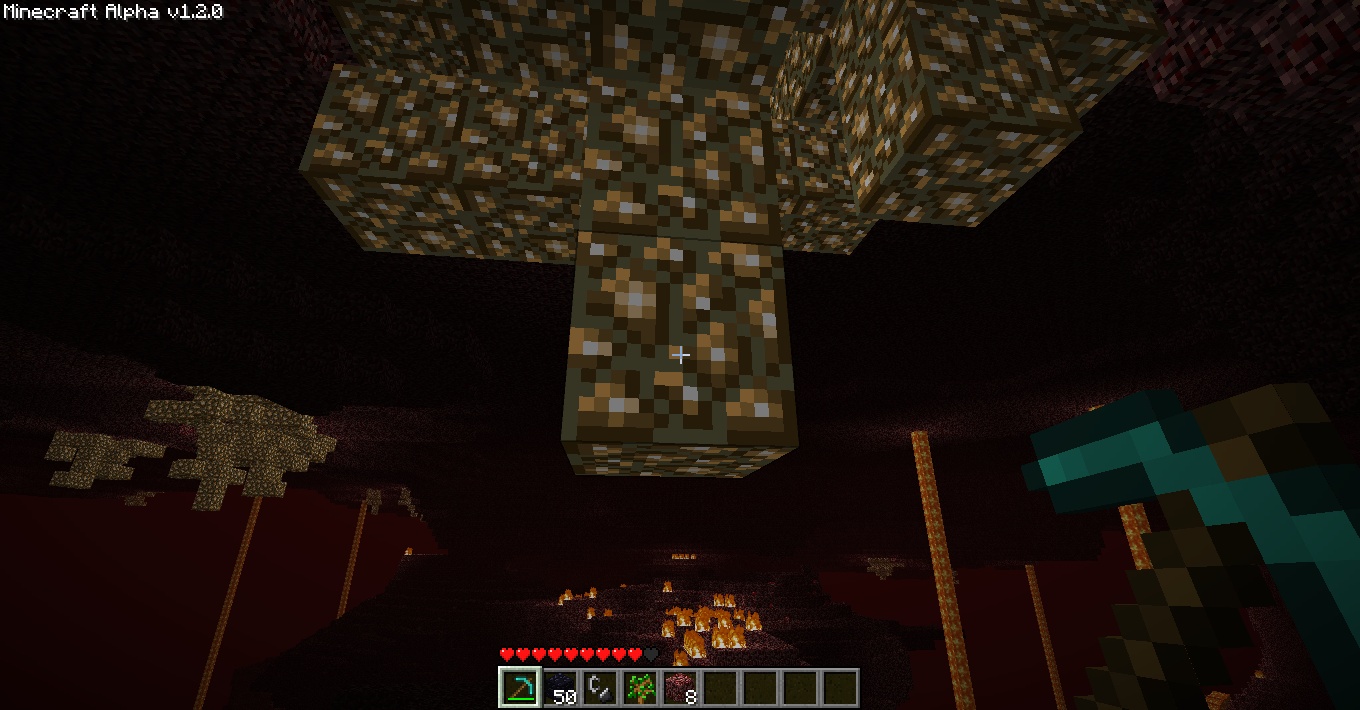 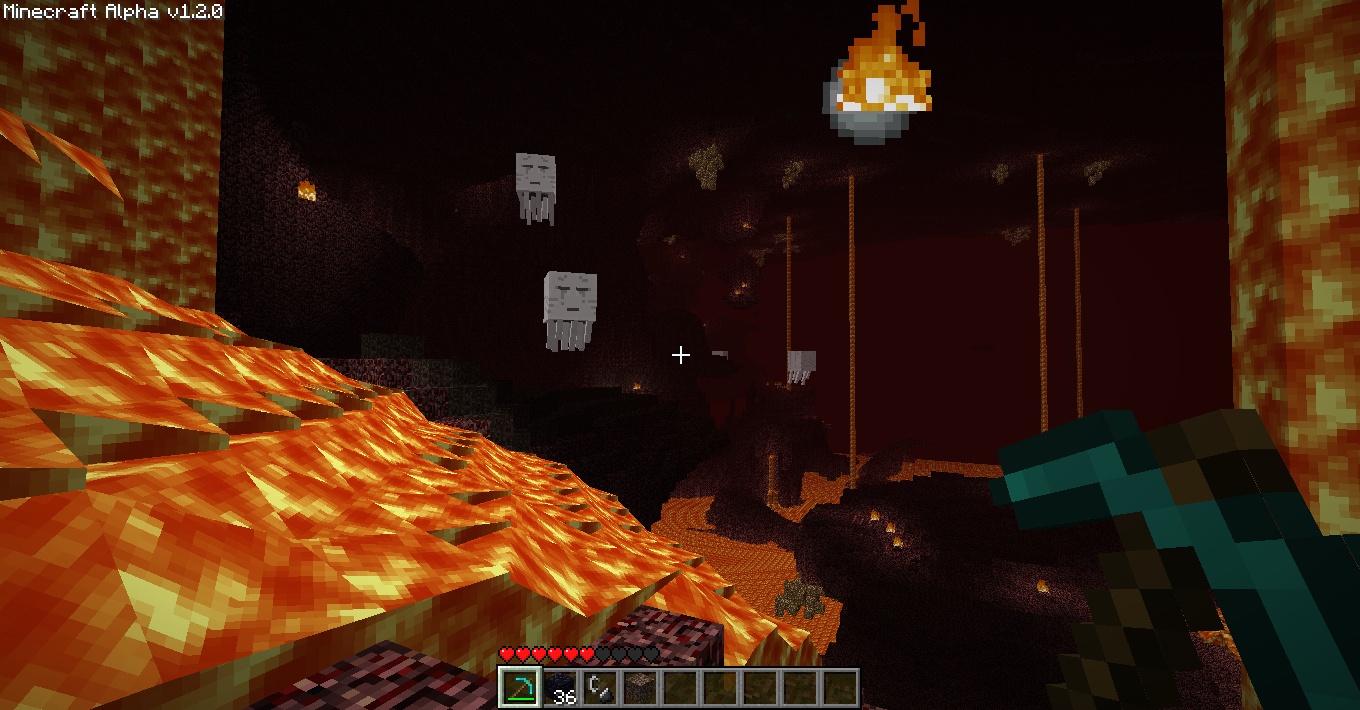 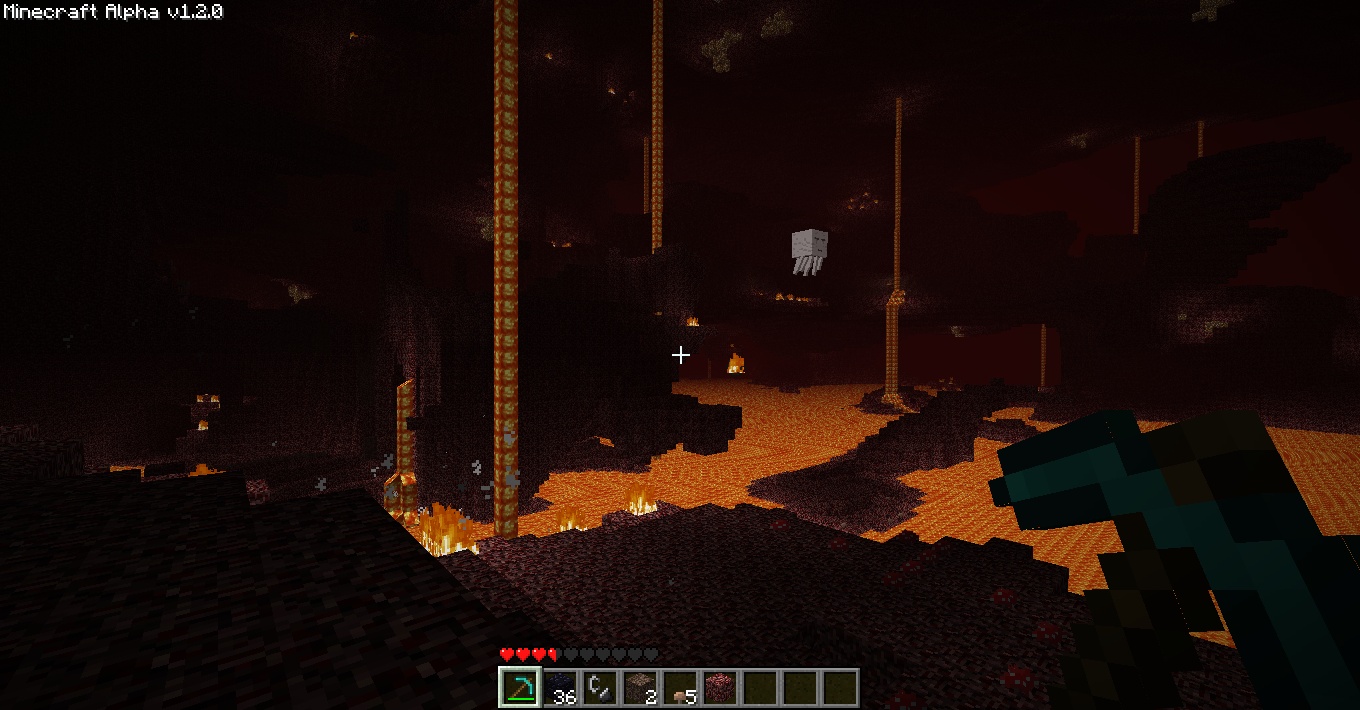 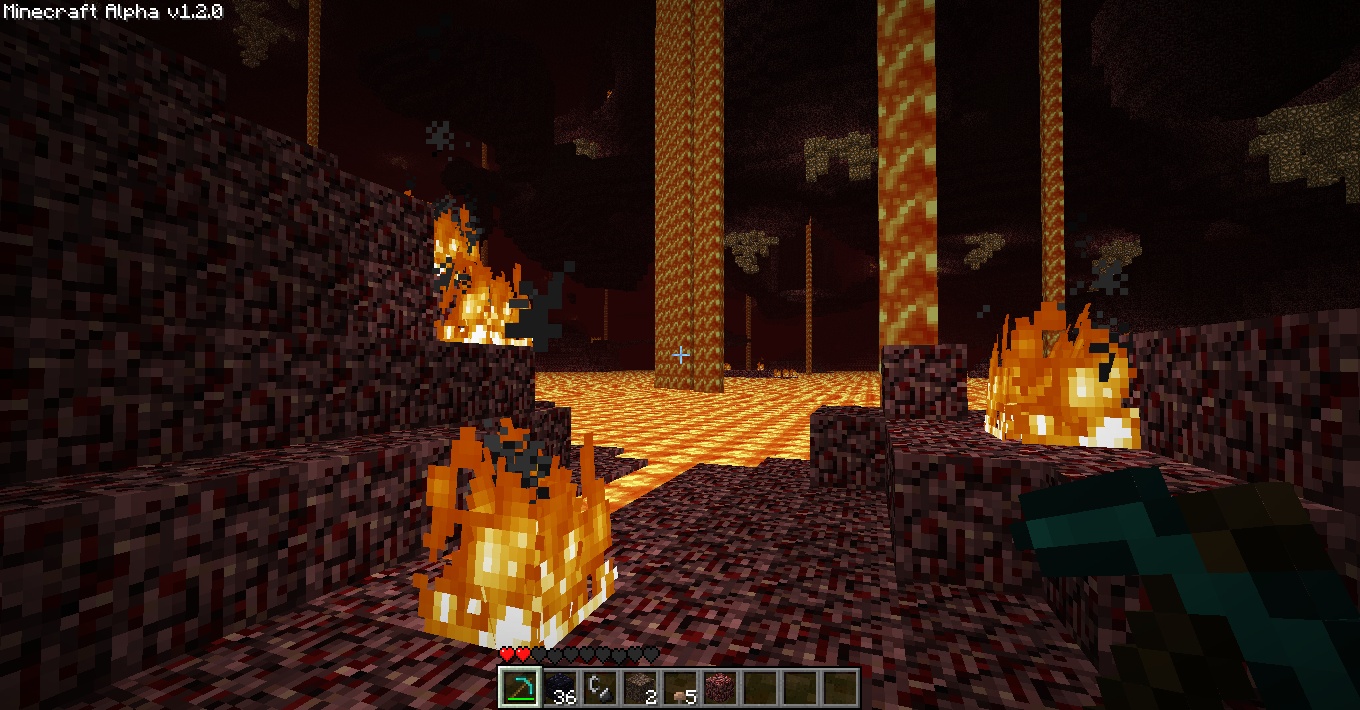 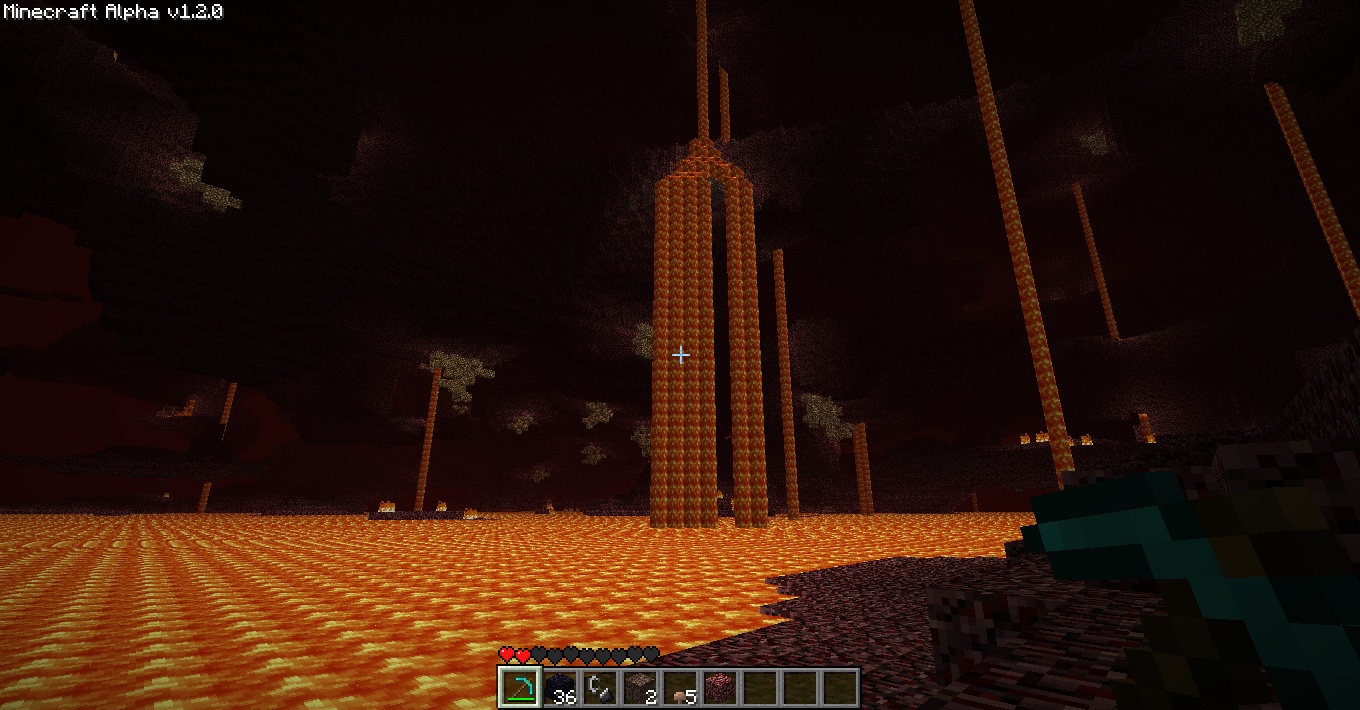 Woooooooooow, some much stuff! I am so ready for this.

Bah, The Slip, what a garbage name; this'll haunt me forever.

it's not final. he's liking the sound of "The Core".

Whew, thought some religious nuts got to him or something.

I thought The Slip was pretty awesome. Reminds me of Quake, the first one, and it's Slipgate Complex. Brought back some awesome memories of badass games of yore.

This is the best update to anything ever.

I just noticed that the fireballs are just snowballs on fire. :|

Other than that, this update is gonna be awesome.

i got a question, can you build a slip gate of the ground... like in a floating ship?