* You need shovels to get snowballs now, and you can’t stack as many * Ice freezes again * Snow blocks on top of top snow no longer looks weird * Less annoying snowball sound effect

I’ve got a really nice and stable base to build on, I think. Terrain streaming works great, and tile changes get sent out automatically, and collapsed into a single message there’s multiple updates within a single chunk. If the number of updates is really huge, it’ll get replaced with a single replaceregion call, which is compressed. 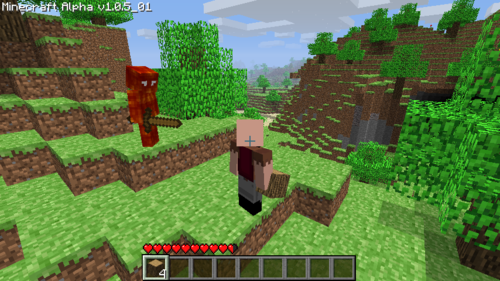 That’s me and Ez trying to play. The visible items in hands are new

It’s far from finished, but it’s actually getting to a playable state. It’s now possible to mine blocks and place them back into the world, but items and other entities aren’t handled correctly yet. Player data gets sent correctly, the streaming works perfectly.

The maps are infinite at the moment, and uses exactly the same save format as the single player version. When the server starts saving players, it’ll save them to “player_.dat” or similar, and it’s highly likely that the single player version will do the same, so if you share your level save with another minecraft player, you’ll have separate character saves.

There are two major bugs at the moment:

I won’t work on MP more this week, except perhaps try to fix those two bugs. Next week I’ll add inventory/chest management to the multiplayer and possibly dropped items, and there will be invite only public testing going on next week. When that works ok, I will release a very early public version of survival mode multiplayer so people can try it.

do it this game is amazing fun, has endless replayability and with the multiplayer support soon, its about to get alot more fun.

Still waiting on multiplayer before I drop down the cash for this game. It was fun for an hour or two but quickly stagnated.

Maybe I'm not autistic enough to appreciate the game in its current state.

you don't have to be autistic to appreciate it. singleplayer is well worth it. it is a million times better than "classic survival test".

The visible items in hands are awesome:)

will there also be animation? like when u dig or hit with sword?

probably eventually. it is early alpha, after all :P

I got killed while offshore and lost all my items, now I don't know how to get them back. Is there a time limit to retrieve dropped items?

well, all items fade eventually. so yeah. you should try, and if they're not there, maybe get them back with INVedit.