A small presentation of the game and its level editing capabilities.

What started as a half-baked Game Make experiment with minimal knowledge of any serious GML scripting, resulted in a combination of Robokill's top-down shooting carnage and Knytt Stories' level editing and story creation. 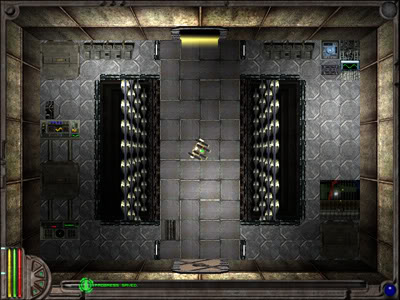 Just how tall is everything in this room? Damn you, top-down shooters!

A very short preview of the game could be the following:
"Navigate yourself through massive levels consisting of sci-fi themed installations and outdoors areas. Try to stay alive, collect or buy a wide variety of weapons and auxiliary items, and defeat powerful enemies."

Yeah. So what. Can you even count how many games out there, decent or not, fit this description? Oooh, not enough digits, huh?

What makes this game more interesting than the generic "shoot to kill, think to live" concept is the fact that what you will play when you run it for the first time, the tutorial level and the main "world", called A Dormant Menace, because I suck at making up titles which don't resemble a Star Wars movie, are made in a level editor. And this level editor is packaged within the game files as a separate program, well-documented, and ready for any of you out there willing to create your own adventures. As mentioned above, much like in Knytt Stories' level editor (those two games share nothing else in common), players can create a world, add their own cutscenes and custom music, build their own levels, specify each level's objectives and script their own events. 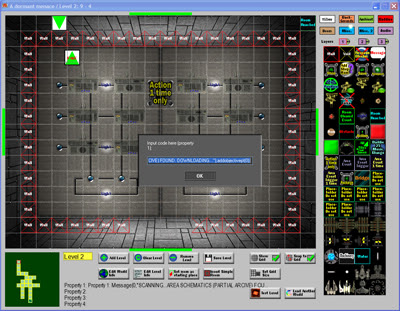 In the editor, although every Metal-Venture specific command is
documented, many object property fields can accept any GML
(Game Maker's scripting language) code.

So, it's not just all about the main game's world. A Dormant Menace was created merely to show the editor's capabilities of putting together a coherent story, with cutscenes between levels, where every room can be a battlefield, or a place for riddles, challenges and maybe plot twists. Try it yourself, post your creations and questions at Metalventure.forumotion.net , and become a part of a (hopefully) large community discussing game creation and anything else you like.

Everythings Fanner when your always having Fan!

looks nice will download 2mro wen i get the chance

So is this called "Metal" or "Mental" Venture?? It's posted different all over the place. =/

Downloading, and also, what Nozzy said is true...

It's "Metal Venture". I corrected it, though I don't remember writing it wrong...

Better notify someone about the spelling on the banner on the front page cuz it's spelled "Mental" in big letters there... xD

I've been a big fan of this since the beta, nice to see it's finally getting the attention it deserves.

Make sure you have patch 1.02 installed, or else you may get stuck at the forcefield.

Im quite sure i have it installed, but i'll try it again.
Also i often encounter a Error message, when opening menus, like the shop, map and/or the main menu. do you have an idea what that could be?

About the forcefield issue:
I have released version 1.03 which hopefully deals with this issue once and for all. I have posted it in the news section, it just hasn't become authorized yet. If you have installed 1.03, the problem in lvl 8 may still be there if you have saved the game at that time.

Here is a way to get past the forcefield, which might work even on 1.02:
Find "options.ini" in the game directory and open it.
Find the line console=0 and change it to console=1.
Load your saved game and GO TO THE ROOM WITH THE FORCEFIELD.
Press the T key. An input field will appear. Input the following line (copy-paste also works):
field_down(roomx,roomy)

About the errors: The game needs a strong machine to run, and your video card probably is old. When not enough VRAM is available, Game Maker fails to properly load all graphics, and this is wheresuch errors occur. Also, the game has been tested only on Windows XP. Using Windows 7 for example might cause errors, but I'm not sure for that.

About the errors: Yes, my video card is quit old, so that might b the problem.

Anyway, you managed to do a great game.
Respect.