Essentially this will discuss some ideas and paths forward for this Community Launcher from where we stand today with 1.0.0.4 and on. It will discuss some of your ideas, some of my ideas, and some dreams to the future.

Hello, I hope you are all enjoying some of the QOL updates to the launcher in version 1.0.0.4. This is a project near and dear to my heart, MOHAAS was the starting game for my clan, and the first game I was a league admin for (RIP Elite Clan Warfare). I probably work on the launcher more than I play the game to be honest. I started the project as a way to brush up on my old coding skills that were and are still pretty rusty, but I think progress has been made. I can't promise timely updates, but I can promise there will be updates. 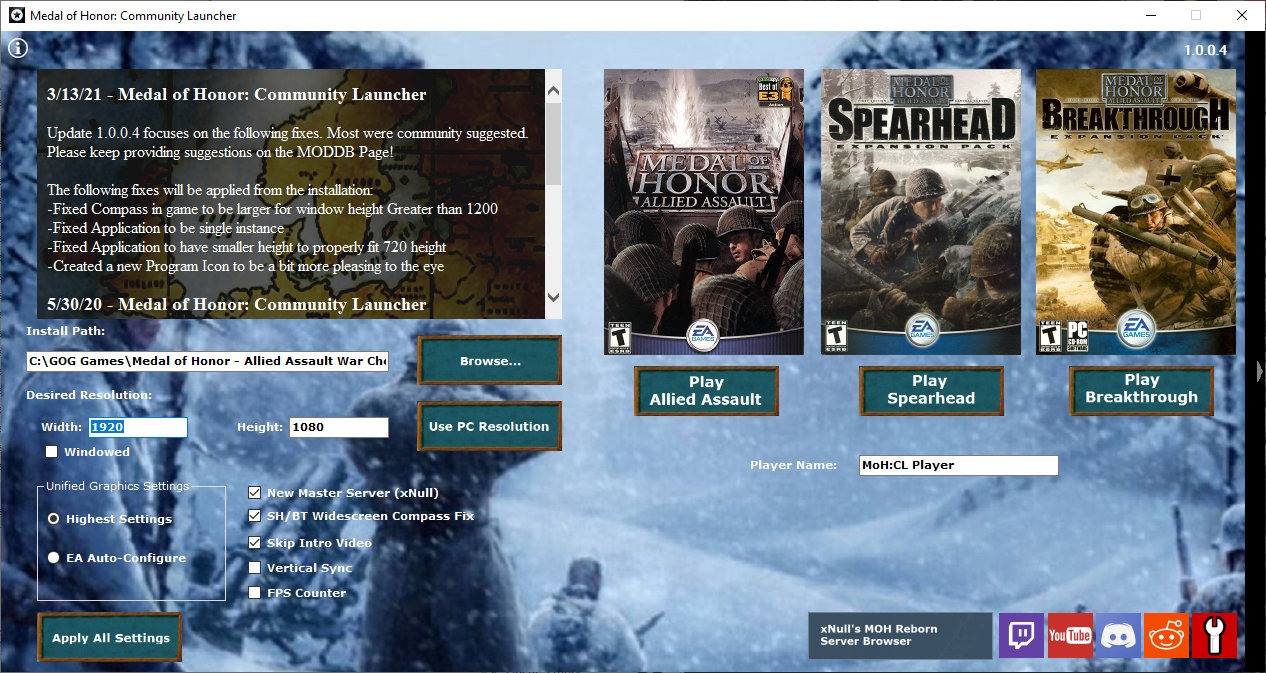 Many of you have private messaged me about your love of the project and even provided additional ideas. Some are easy to implement, and some are difficult, I appreciate all of the input on MODDB and even my personal Discord as well as other social networks.

So I feel I should address what ideas are in my head and some of the things that I am poking at.

Virtual Resolutions and the Effect on MOHAA, SH, BT

I really want to thank martincz87 and some of his key input that led me down the path for the compass fix. It also opened some new territory up that I was not aware of. The menu system of the game and its expansions functions using Virtual Resolutions. The textures and the assets are designed as such, with what appears 640x480 being the minimum for texture size. Some are larger, like the loading menu screens and such, if memory serves correct those may be up to 1280x1024. This places us in 4:3 territory, when in a modern era, we wish to be in 16:9 ratio. Naturally, the virtual resolutions set the game to render and stretch all menu interfaces, while this works great for 4:3 resolutions, it leaves much desired for today.

Below is a 1366x768 lower resolution, commonly used on older laptops and places us above 720p by a bit. I used Spearhead for this test. By deactivating the virtual resolution, we can fix the menus for the multiplayer, even the voting menus of the game or any other menu the user decides to pull up. This same feature works in higher resolutions fixing the aspect ratio, but shrinking the menus. With some time, I think this is a step forward, a way to fix almost all menu aspect ratio issues in multiplayer. This is an experimental feature I hope to add to the launcher in a future launcher update. 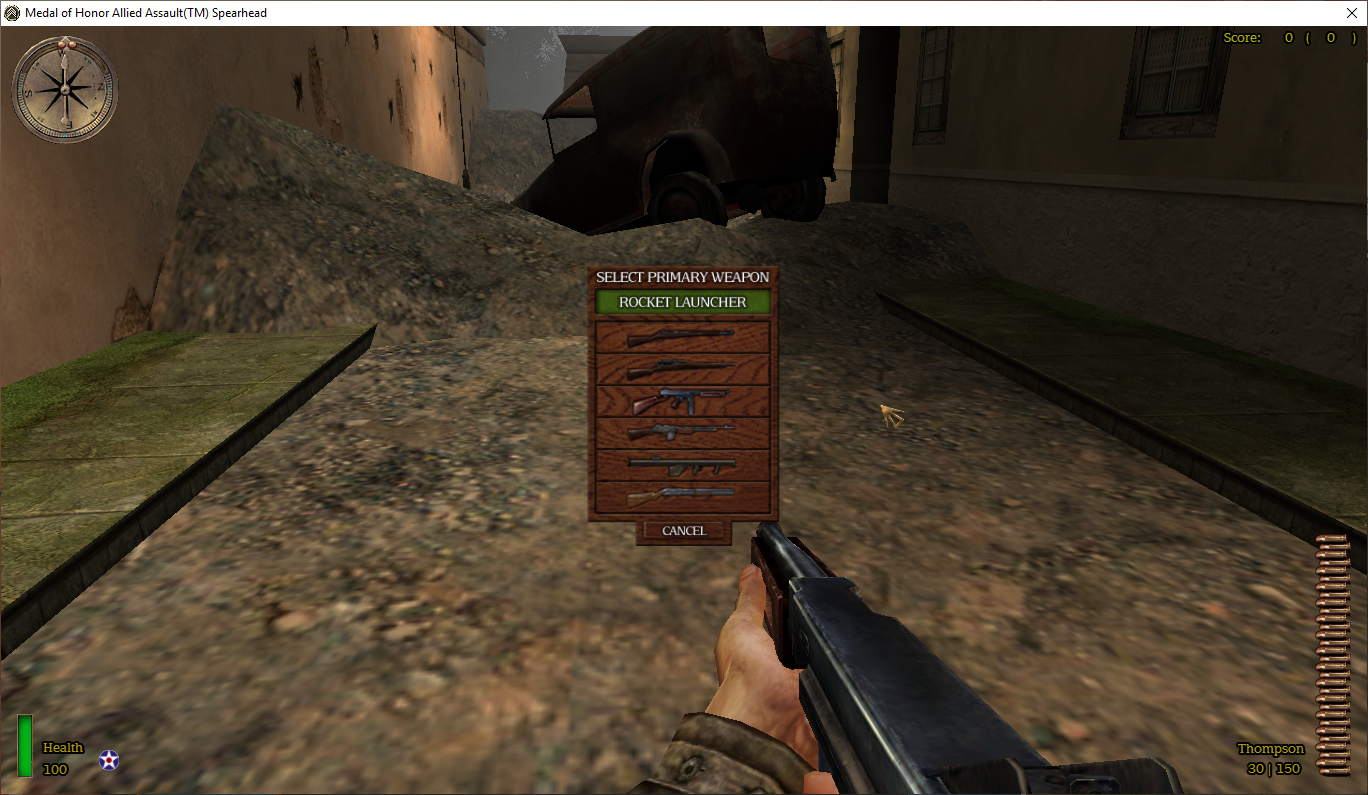 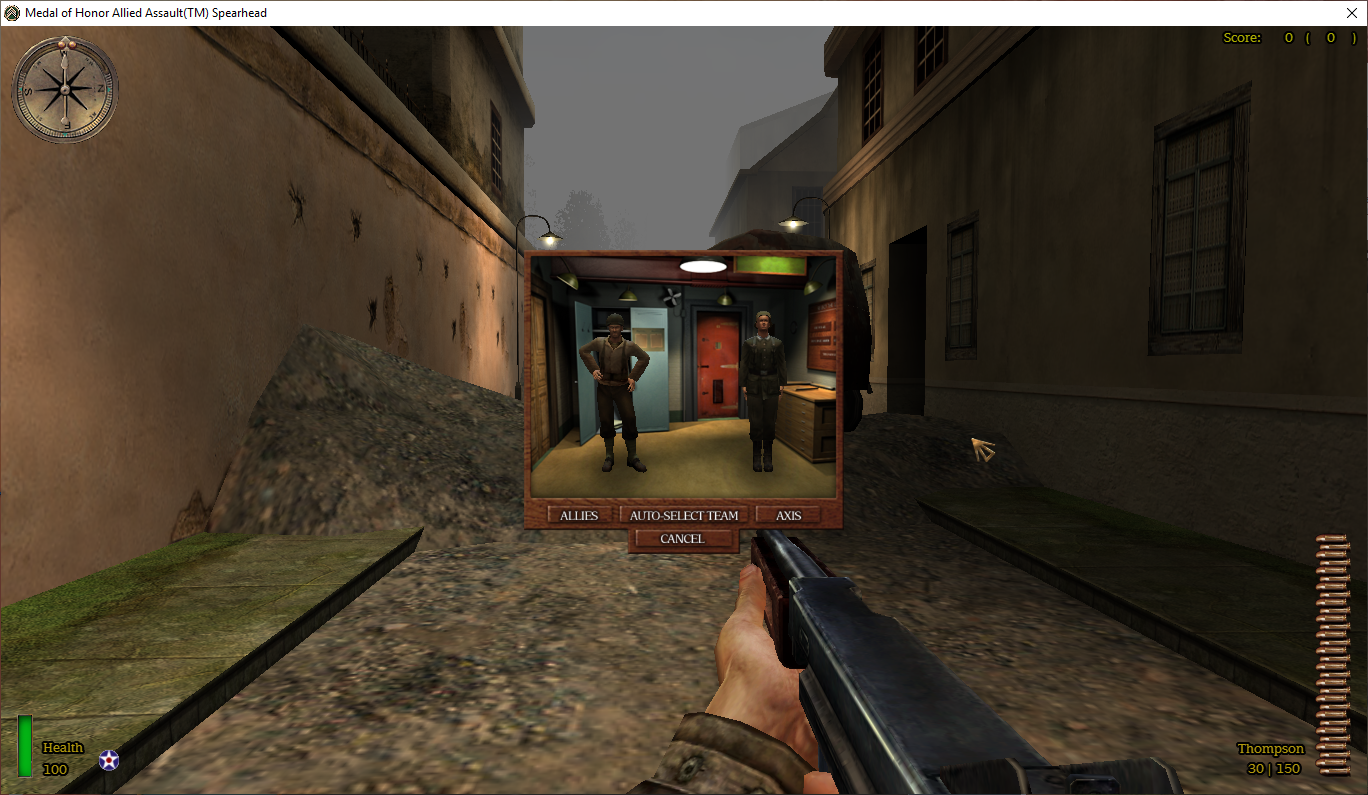 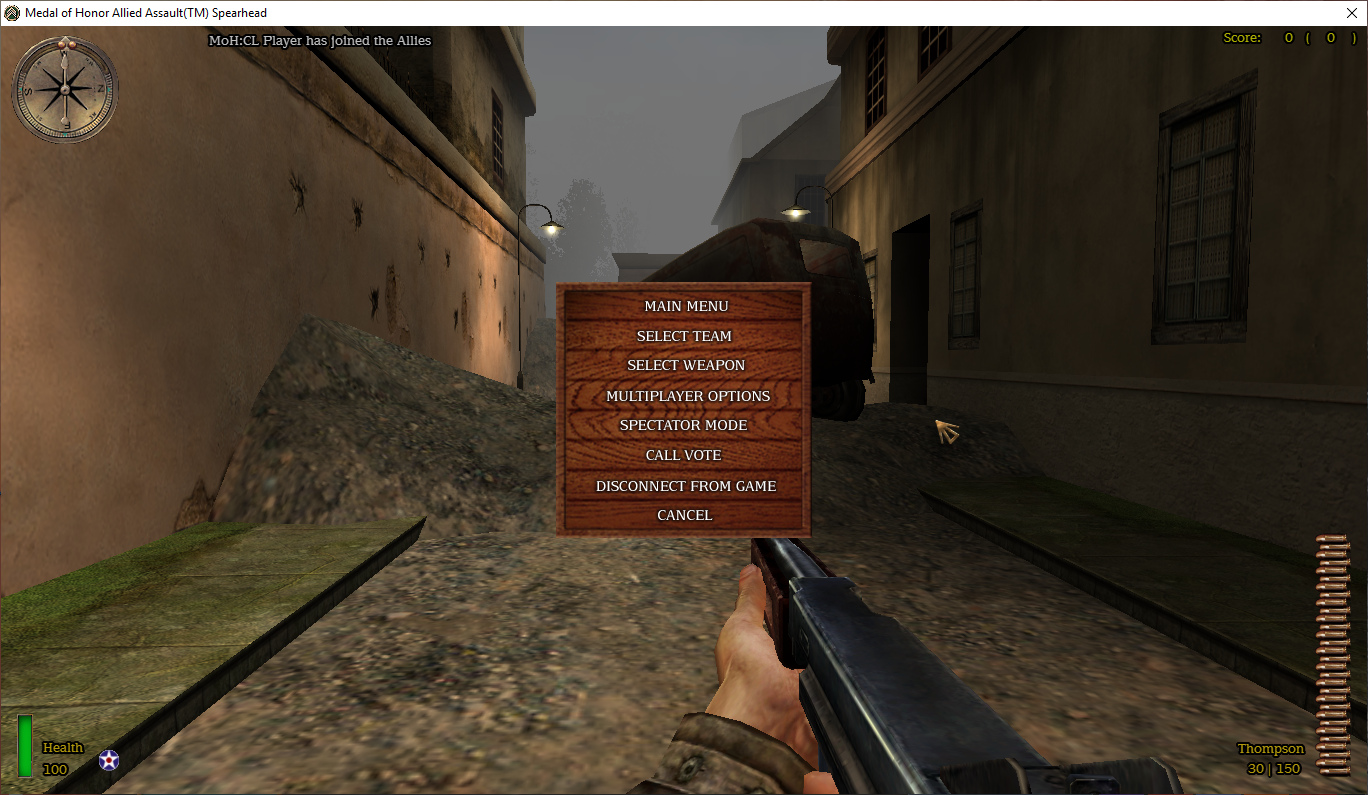 I know many of you would like some FOV settings added and it is a goal of mine to add into the launcher. However, this may be difficult as the game handles FOV very oddly. It can be enabled in single player using fov commands and a video restart. However, the multiplayer code for the game does not allow custom FOV unless the server you are on allows it, most do not. I plan to poke with this as it is a widely suggested feature, but when the game was coded I think they felt it gave some players an unfair advantage or no one cares because were at 1024x768 resolutions for most players. We are talking about a game from 2002.

This is a feature that I think is great, but also hate. The last thing I want is for the application to choose the wrong path, especially if the user has two installations at the same time. Many have this game on GOG and on EA Origin or CD. Letting the user choose may be the best option. If you read this far toss out some opinions.

I won't do this because it takes power away from the user. If you want it to work fast, push the Use PC Resolution button and be instantly happy. I think the default will always stay at 1080p.

Adding a more gentle method for updates is something that I would like, the current popup when you start the program is nice, but having some kinds of update button in the upper left corner or some kind of small display is something I feel would be nice. For now updates will popup as a yes or no to update when you start the launcher. An option to turn off updates would be good for those who do not want the latest as well.

Yeah I said it, this would be nice. I don't think I can solve that games Multiplayer Login issues, but custom settings launching into the Single player. The game uses basic .ini files. It can be done. This is a possibility, should other items prove too difficult.

I will tell you now this is the DREAM section. As a launcher I think it would be great to have features that are more equivalent to the CNCNet Launcher for Red Alert 2. It is one launcher I highly admire and wish we could have some features like that. Chat Rooms, Game Lobbies, Automatic Download integration, better tools for Public Games and Competitive Games. I remember the days of Gamespy Arcade, much loved and maligned. Something like that without strict logins would be pretty amazing to revive this old game.

Your Thoughts and Ideas

I hope this writeup has been slightly too long and slightly too informative of my thoughts and what I am looking at, as well as some examination of your input and your thinking. Give me your ideas, ill see what can be done and we will all keep this great game on the road, so we can be playing it in 2030.

Thank you so much for this, as always grateful for not letting this great game die

I went through the article swiftly and it is a lot to take in.

But just from top of my head:

Regarding much requested FOV setting, you could have a look at Hazardmodding Team's Coop mod, where they implemented recently (v2.02) FOV in-game menu switch and see what they've done there. Or ask them maybe. Perhaps, you could even make your project compatible with their work, because it seems to be quite alive and evolving.