Here we are going to take a look at some really early gameplay footage, as well as some new ships and a half desstroyed moon.


Seeing as the team only consists of currently me, a writer (Tyrannus), music composer (Gareth Coker), and a flow_grappher (Black_Rainbow), progress is actually going quite fast.

Here we will be looking at many of the WIP area's found in X32I, from a asteroid field, to the remains of a moon being mined for it's resources. 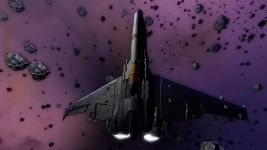 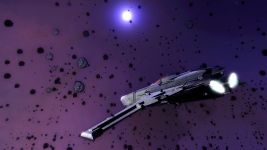 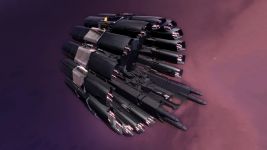 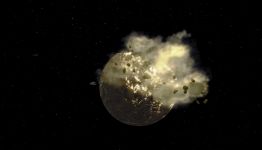 
First I'd like to point out that this mod has only been in development for nearly 3 weeks, and mostly just by me, as most of the new team members have only just joined the project. So expect to see lot's of bugs.

This is taken from the first mission, which also acts as a tutorial to get you used to space flight, and zero gravity movement outside of the ships.

You are tasked to interface with a Satelite in orbit or a Gas Giant which has been constantly shutting down for no reason, however apon interfacing with the satelite a jamming device is activated and all your suit systems start to fail, while a enemy fleet approaches from the dark side of the planet.

Flying around in space like that looks really fun. Perfect engine for it too, everything looks very nice. Keep up the good work!

Looks good, but a spaceship with wings?

Yeah... How do you expect it to fly through planets without wings? ¬¬

To reply before anyone else brings this up, star trek has non conventional designs of their ships.

Basically it comes down to artistic license, At the end of the day you have your ideas of what ships should look like, I have mine.

If we all had the same idea's the world would be pretty damn boring.

Then don't claim you need wings to fly!
I hate startrek btw :p

Them be fighting words.

(throws jacket onto the ground) :p

All ships do have wings, just the architecture is different. But it still means that all ships have wings no matter how discreet. (Unless the ship is never to fly to and from planet atmosphere)

it don't need wings but looks better with them

Coming along nicely. The zero G section of Cysis made a good lead into this sort of mod. Looks forward to seeing where this goes... keep it up...

Sweet.. this looks much cooler than the first X32I IMO ;)

Yes, that is a planned feature. You can add armour plating, use different engines, change weapon type, and other stuff which has to be all written in stone first.

Stuff like that will take some doing, but will not be impossible to implement. However we are going to try to add that 100%.

The space ship should have the ability to rotate, right not it acts and behaves exactly like the aircraft from Crysis. Real space ships do not care about their orientation, and the do not bank unless it serves some tactical importance to do so (presenting one side to the target and so forth). Also, inertia should be represented in this game, and space ships and people should not stop once they cease thrusting, instead they should keep going at the same velocity.

Yes you are right, but as I've stated many times, this is really early. I'm not even past the 3 week point yet of development, so give me some time to actually make this first.

Vehicle controls are at the moment being worked on, as well as gravity settings etc.

I can feel a aneurysm coming on. ¬¬

Nice work. I'll be looking foward to it.