A short update indroducing the new HUD, a new enemy, 16:9 and some plans.

This time I'd like to introduce some new features to you. First of all I'd like to start with the most important one, the new HUD replacing the one from Doom 3. Desolated shouldn't be too much Doom and one way to accomplish that goal was a new HUD. So I made a new one and I it turned out it really worked. The gameplay feels different, which is also caused of the new Crosshair not showing anymore if an enemy was hit or suffered damage. Well, words can tell a lot, but pictures can speak for themself, so... 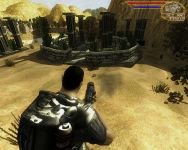 A short descripiton: In the middle is (what else) the new, very simple crosshair. There's (as already told) no more feedback if you really hurt a monster, which make it feel different. The main new-thing is that "thing" on top on the right side of the screen. The red bar is health, the blue shows the armor. Beneath it you can see the ammo status and under that one you see the money you own.

Another new thing is, I completely replaced the old lost sould with two different kind of skulls. The first one is already known, but for those who forgot there's a screen in this news. The second one is a model from Fuksas Massimiliano from Archive 3D. I wanna thank you for the nice model! I saw it and got just one thought, it's perfect. That's why I scaled, rigged, textured and implemented it. Now screens of both: 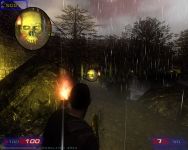 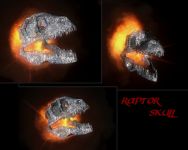 Likely or not (sorry, just have to find a word using l to hide a secret message), Doom 3 only gives the possibility of playing in 4:3. So I managed it to give the player the opportunity playing in 16:9 mode, where 720p and 1080p is given. To start a game in this mode, I'll include two batch files to run and it'll work properly. Here's a screen in 16:9 as an example: 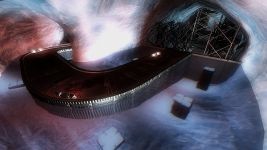 Last but not least, there's another news. To make it short, I'm planning to implement a new shotgun where the model is made by pvt.Johnsen. Thx for making this possible... The weapon is still wip, but it'll be done soon. In the next news you should be able too have a first look. The only thing is, I don't wanna leave you with nothing of it so here's an very early low-poly version of the model: 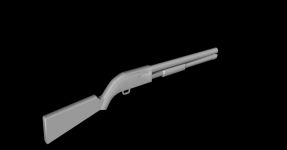 That's all for now, so see ya soon and stay patient!

Yes weapons are never to much in Doom, keep it up the good work.

Work on the shotgun model is a little scattered, things at home are pretty crazy at the moment... lots going on. I'll have it done soon though.

The HUD and content are looking great Dave, keep it up!