The First of a Weekly Sunday Media Update - Featuring updates from the mapping and generic development.

A
hoy! This is the first of a weekly Sunday media update. We're going to be talking about the first level, I've been working on it for a while. Gotten better from the first version but still has some dev textures. YellowApple is attempting to take up modeling and make some metal crate props.

Dave is working on the engine a little, we might be modifying the physics, to make it more realistic for being in space, obviously if you were in space, even with artificial gravity, it'd still be lighter. We might even create a new tie to entity 'func_vacuumgravity' which makes the gravity lighter when outside, because we are planning to go outside during the storyline.

We might even include new shaders with bloom to go with the upgraded physics to give the environment more effect. This early in development, we've just got to wait and see what happens.

So, on the line of mapping, here's what we've got - I'm working on the Cryogenic Room, with the main hall that's outside, with an amazing vista (yet to be completed) - I haven't even remotely started on the Cryogenic Storage room because there's more to worry about.

Right outside is the loading dock, which is stuck on a constant back and forth loop - reusing the unused models/gantry_crane models from Episode Two, here's some screenshots. 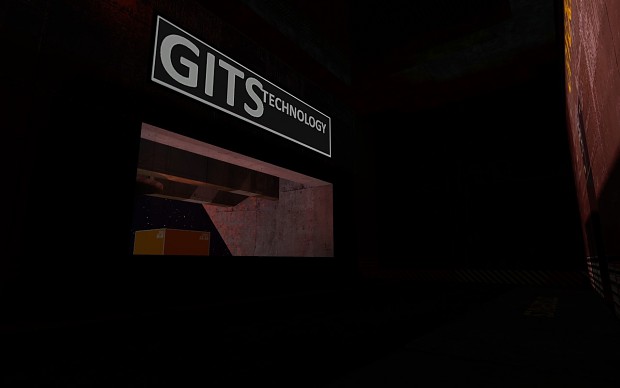 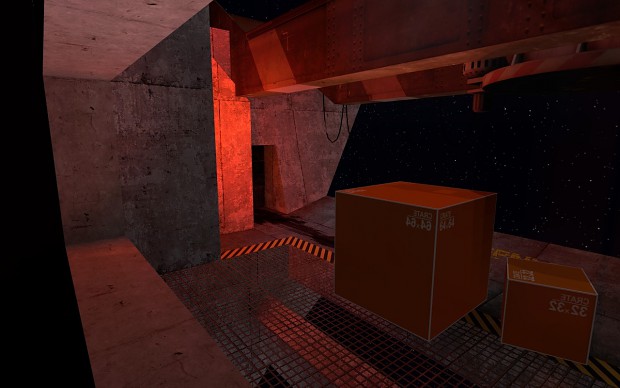 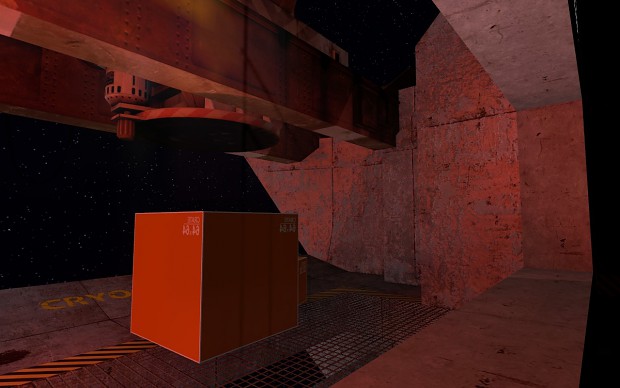 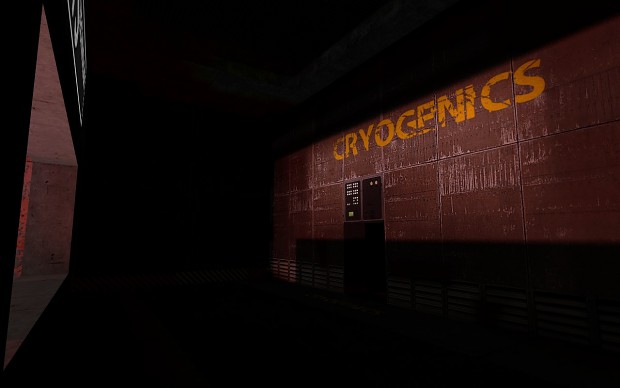 Dave is going to be working on shaders and physics as you know, so I talked to him about it...

BlabVoid: What kind of new shaders will we be getting in this mod, hopefully?
Dave: Well, I had the intention of putting in Vertix shaders, most NVidia cards have them, they give off a nice bloom and blend nicely for any kind of light source the player might use in a game, such as a flashlight or a glowstick.

BlabVoid: We might be having flares you can pick up, like in Episode One and light enemies on fire with them. The Shaders on the Episode One flare was rather rubbish, what do you think we could do for that?
Dave: Well, supposing of picking it up with a gravity device that wighs about 50 pounds, or carrying it with no offhand weapon of ANY kind, we could simply make it an inventory weapon, or, if not that, we could replace the flares with emergency glow sticks.

BlabVoid: You can't light enemies on fire with a glow stick though can you?
Dave: No, but that's not really the case, the glow stick is focused to be nothing but a light source, it would be somewhat a tool, and not a weapon.

BlabVoid: Well perhaps we could have glow sticks, but they would run out of light, and be rare to find, alongside flares, which last a bit shorter time, and allow you to ignite enemies.
Dave: That's why they call them "emergency glow sticks" it's dull, and gives off a small amount of light, but they don't run out.

BlabVoid: So, physics? What would we be seeing with a physics 'upgrade'?
Dave: OK, this may sound very complicated for you who are unfamiliar with programming, now, most of us know that the Source engine is coded by C++, there are other engines with unique entities I have in mind, like, Euphoria.

BlabVoid: Euphoria has advanced Ragdoll Physics like you told me, right?
Dave: Yes, it has every thing a ragdoll has, the skeleton, the texture muscles and the body, but Euphoria has one more ingredient, they call it the Euphoria Ragdoll Behavior.

BlabVoid: What does it do exactly? Prevent bones stretching too far apart or something like that?
Dave: Well, when the Euphoria ragdoll blends into the environment (when it triggeres so) it reacts fairly realisticly towards what's actually happening to it, unlike your average ragdoll, that just goes "flop". And upon blending out, it returns to its first figure as it was either before or another kind of pose.

BlabVoid: Also, in Source, Ragdoll bones seem to bend in the wrong directions.
Dave: This is because of the basic physics and collision, Euphoria uses the CPU to react to this action, along with some AI. Making every action quite unique.

BlabVoid: Meaning Ragdolls never land in the same position? Like cows, no one cow has the same pattern of spots as another.
Dave: That's because it was coded to do so, it's a function, but with Euphoria ragdoll actions directed by the game engine, those characters also have an underlying sense of self-preservation.

BlabVoid: That would be more realistic if the Source Engine had that already. But at the time of the Physics development, it was impossible, right?
Dave: That was until Euphoria decided to add some behavior towards those actions, what I don't understand is that most games nowadays are just using the same old basic ragdolls, we need to see more of Euphoria.

BlabVoid: Great, I'll be looking forward to seeing some of your work in the near future.
Dave: That's the idea, I still need to find out what language that codes Euphoria, if not the coding, then I'll use Endorphinm which is a simulation program powered by Euphoria.

BlabVoid: That's it, I'll get to you later.
Dave: Alright, thanks.

Dave is our Coder and is very professional. He might be going to work at Valve however, but if he does, there's only 1 /1000 chance that he'll have the time to work on the Mod along with whatever project he works on at Valve, if he doesn't that will be great because he can work on the Mod.

We're currently empty on 3D Artists (Modelers) and are looking for high quality people.
Message the Studio for more information.

Your early cryogenics area is looking pretty good! The interview was interesting too. But one issue with using Euphoria is that (from what I've heard) its very expensive and the company is very picky on who gets to use it. I wish you the best of luck incorporating it though. I enjoyed it a lot in GTA4.

That was the problem with the GTA version of Euphoria, Rockstar messed about with it too much, making it an artificial flop.

Really nice, I liked this game, gonna track and see what you will show us :)

PS: That second screen made me remember of... Hidden Source... just don't make me remember old good mods that the team left development, hope that you don't do the same when you release this.