Masterspace v2.0 has been released introducing a new particle system implementation, as well as a new sound engine. In this version, the water simulation has been reworked with a better algorithm, allowing for near real-time simulation. Also introduced is support for scripting scenario objectives.

Posted by MasterTechnologies on May 15th, 2013

Masterspace v2.0 has been released, introducing a new particle system implementation as well as a new sound engine. The plugin Particle Universe has been implemented, which allows for much improved particle effects for e.g. explosions and smoke. Also, new particle effects has been added for digging and production. OgreAl has been replaced by OgreOggSound and now positional 3D sound is functional. Additionally, a lot of new sound effects has been added.

For the release of v2.0 a new trailer has been created, illustrating a lot of the current features in the game. All footage in the trailer is assembled from actual gameplay and will be used as promotional material for submission to Steam Greenlight in the near future. Watch the new trailer below:


In this version, the water simulation has been reworked with a better algorithm and the simulation is now localized around the player position. This has increased the speed of the water simulation more than a factor of 10, and is now running close to real-time. Also, the bug with water disappearing over time has been fixed. Additionally, the rain implementation has been improved and the rain intensity is now changing over time, illustrated visually as a particle effect.

Some other visual changes include a lot of improved world textures, along with new models for the workbench, trading post and stone cutter. There is one new object, the plasma generator, which along with the solar panel generates thrust for spaceships. Objects providing thrust is now necessary on spaceships to allow them to move. As of this version, the collision shape and mass of the spaceship is calculated in real-time. The mounting of spaceships has also been improved. 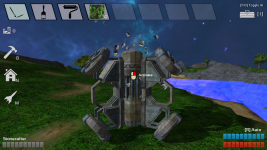 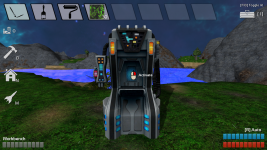 Introduced in this version is also support for scripting objectives for scenarios, as well as rewards, such as enabling the construction of additional objects. As a demonstration of this, two sample scripted scenarios are included. One of these is a simple tutorial, where objects are unlocked after achieving specific goals. The other scenario is named Armageddon, in which players are given a limited time to construct defenses to survive a meteor swarm. A settlement is randomly generated from the buildings in the player database and the goal is to save as much as possible of the cultural value of the settlement.

As usual, some bugs and crashes have also been fixed. For a complete changelog, please see below.

To upgrade to the full version, download and install this unlocker. Please note that you need to apply this unlocker even if you have unlocked a previous version, as the unlockers are version specific.

Wow man keep it up!!! Each of your update improve drastically the game and this update look like to be the best so far. Can't wait to try this with my pals.