The latest update for Quantum Engineering includes a market for buying and selling items and a modding API which allows you to create your own machines, crafting recipes and more. 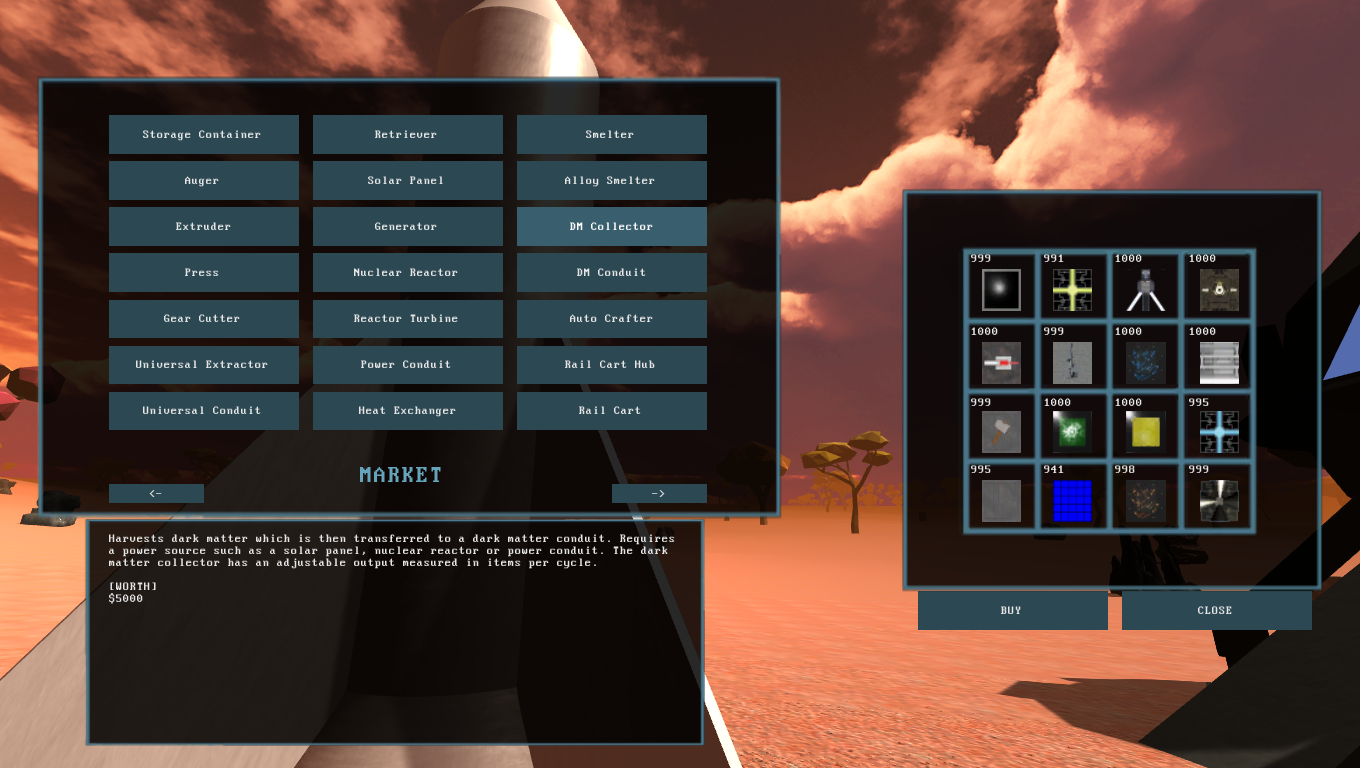 The market is a new feature added to Quantum Engineering in the latest update that allows you to buy and sell objects. You need to be within 4 meters of the rocket to use the market. This is the same rocket that lands every day to collect dark matter. You can now summon the rocket if you press the M key to open the market and the rocket is not currently available. The button underneath your inventory toggles buy / sell mode and the menu on the left side of the screen buys or sells the associated object. Prices are affected by purchases and sales. A sale decreases the value of an item 5% and a purchase increases it's value by 5%. Prices are shown at the bottom left side of the screen when the buttons are hovered over. 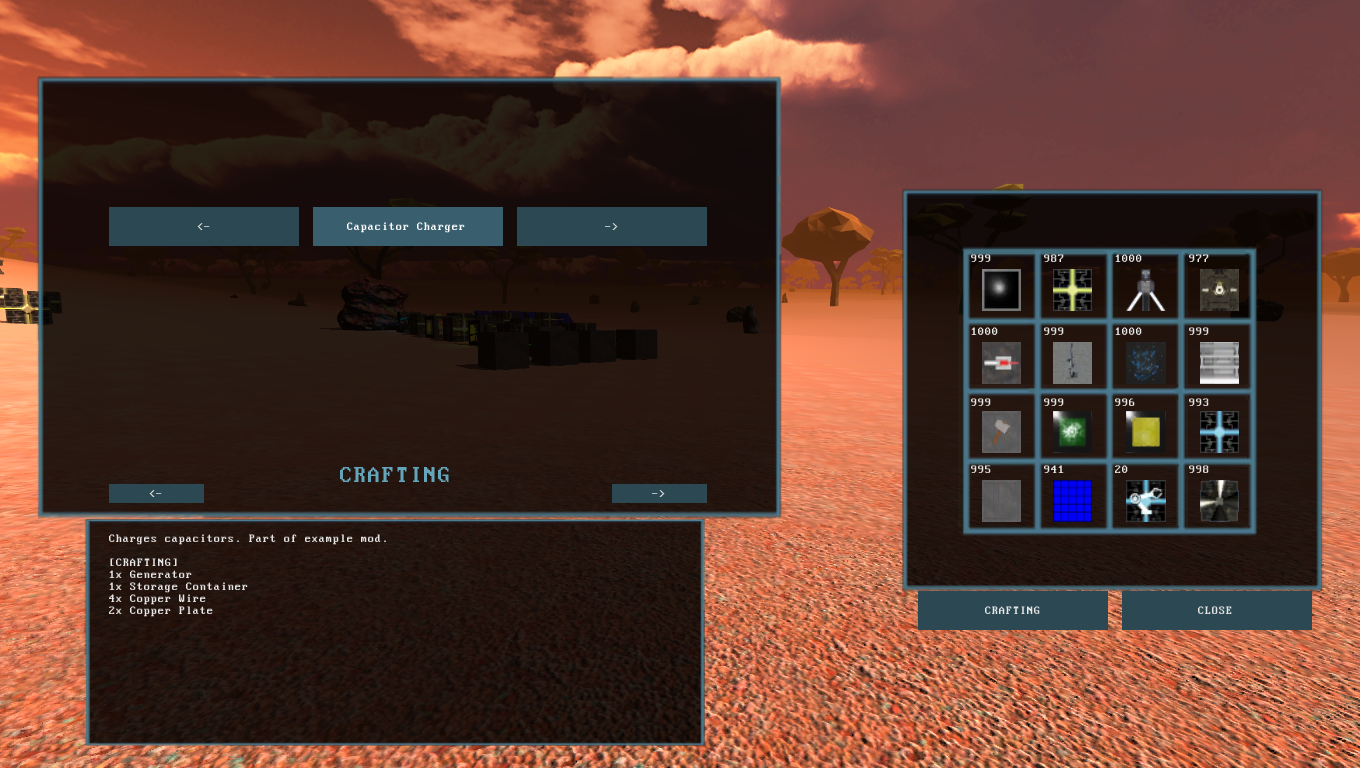 The Quantum Engineering mod API allows you to create your own machines, items and recipes, overwrite existing recipes and more. Machines, items and recipes are created via simple text files. An item can be added to the game simply be adding it to a recipe and creating an associated image file in the mod's Textures directory. The game can also be extensively modified via external libraries using the plugin loader.

If you are interested in creating plugins, referencing the game's source code may be helpful.

and the documentation here: Droog71.github.io

An example mod can be downloaded at the following link: Example Mod Download

Mods are stored in Unity’s Application.persistentDataPath. The location of the persistent data path varies depending on your operating system and should be as follows:

To install the example mod, extract the downloaded .zip file and place the ExampleMod folder inside of the /Mods directory. 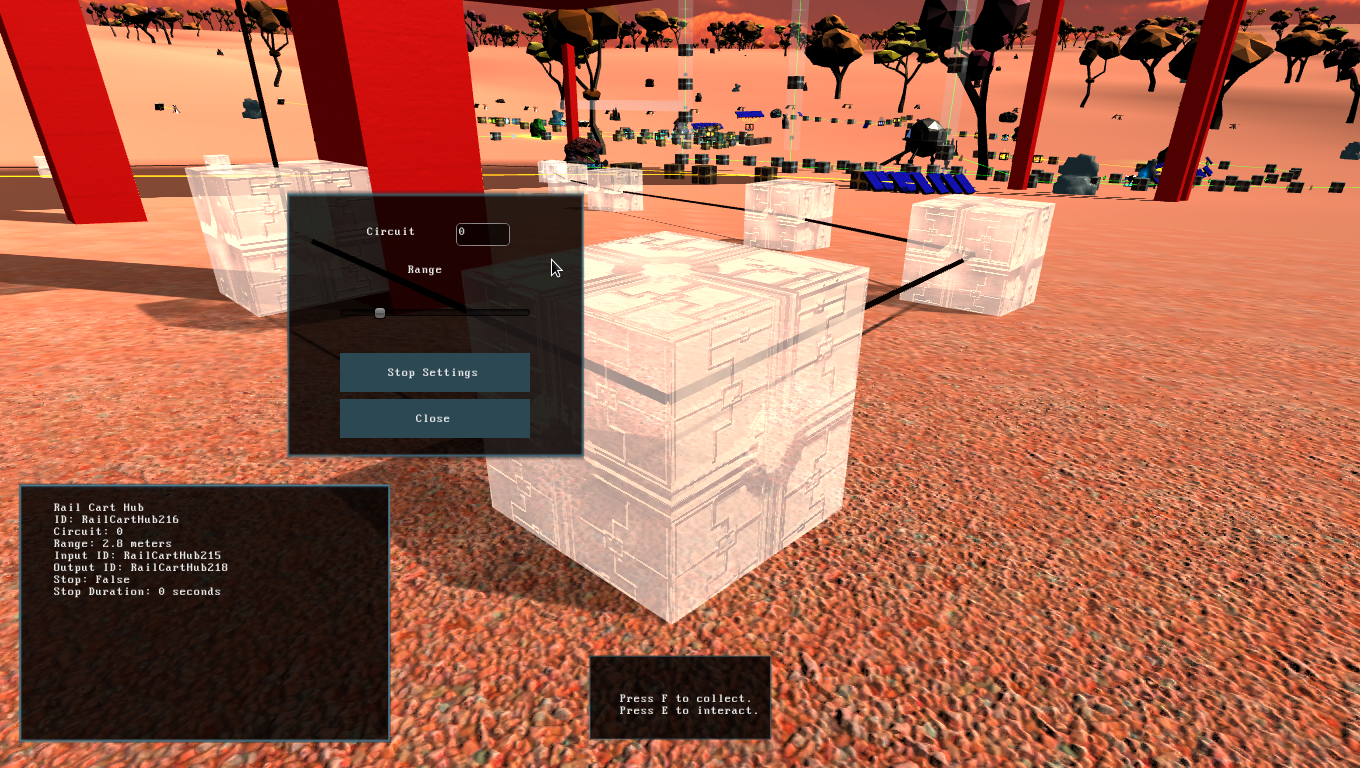 Rail Cart Hubs now have the option to assign circuits. Hubs will only connect to other hubs with a matching circuit designation. When a rail cart is placed on a hub, it is assigned to the same circuit as the hub it is placed on. This system allows you to create more complex rail cart systems with as many circuits and carts as you want.

Many aspects of Quantum Engineering's building system have been improved. The first gif above shows how placing large amounts of blocks is now done with a co-routine so no hitches are experienced. The second gif shows improvements to the painting system for combined meshes. Previously, combined meshes were painted in sections depending on which block you sprayed with the paint gun. Blocks are now painted by type so the experience is smoother and simpler. The third gif shows the new ability to switch between automatic axis selection or manual axis selection when snapping blocks together. Automatic selection is controlled by ray casting while manual selection cycles through block faces with a key press. 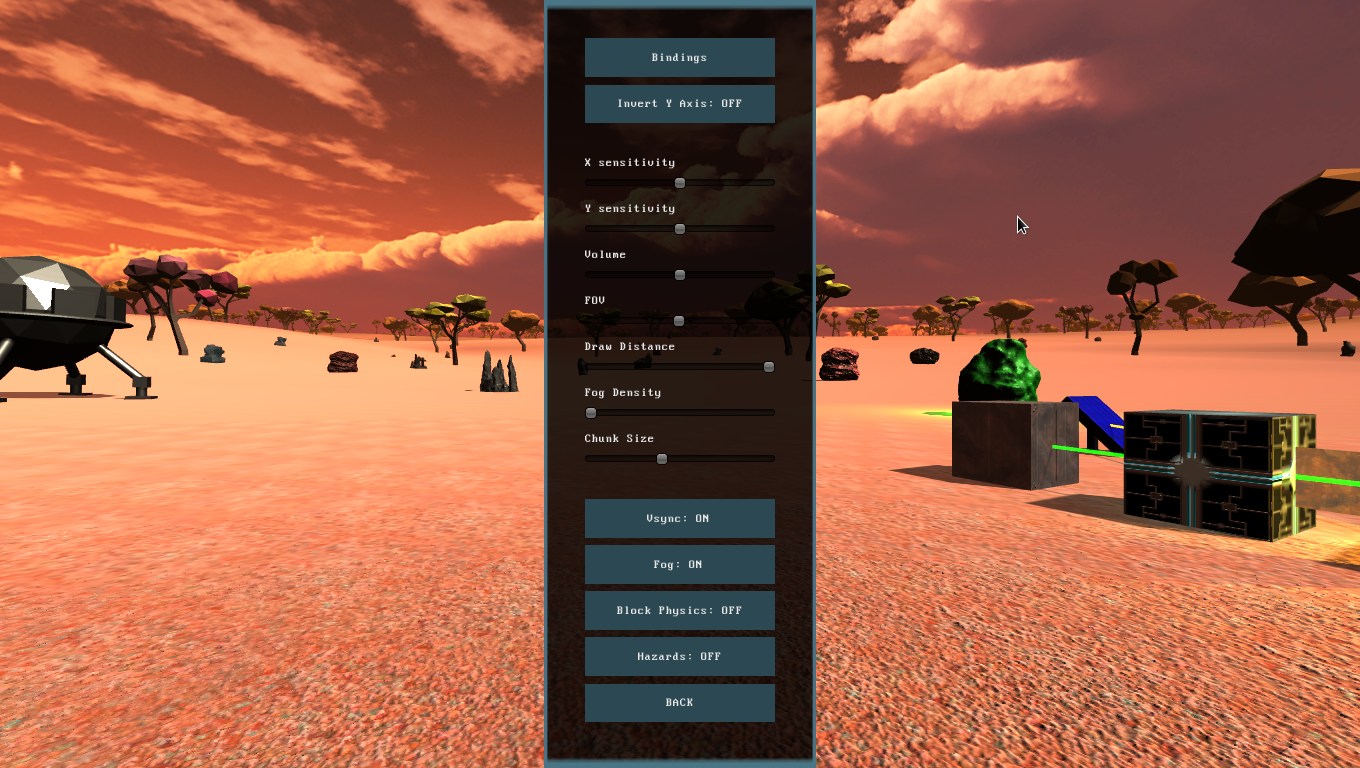 Fog can be toggled on or off and the density of the fog can be adjusted for the atmospheric Gliese 876 location. Hazards can now be toggled on or off from the options menu as well for those who want to play the game in a peaceful environment at their own pace. The new "chunk size" setting affects the distance around the player that blocks are loaded when editing combined meshes. Combined meshes are created from the standard building blocks in the game such as bricks, glass, iron and steel. This is done for performance reasons and this setting is a performance setting. High end machines should be able to handle greater chunk sizes without lowering frame rates which makes chunk loading less noticeable. Lower chunk sizes allow the game to be played with high frame rates on low end computers. A toggle for V-Sync has also been added to the options menu. 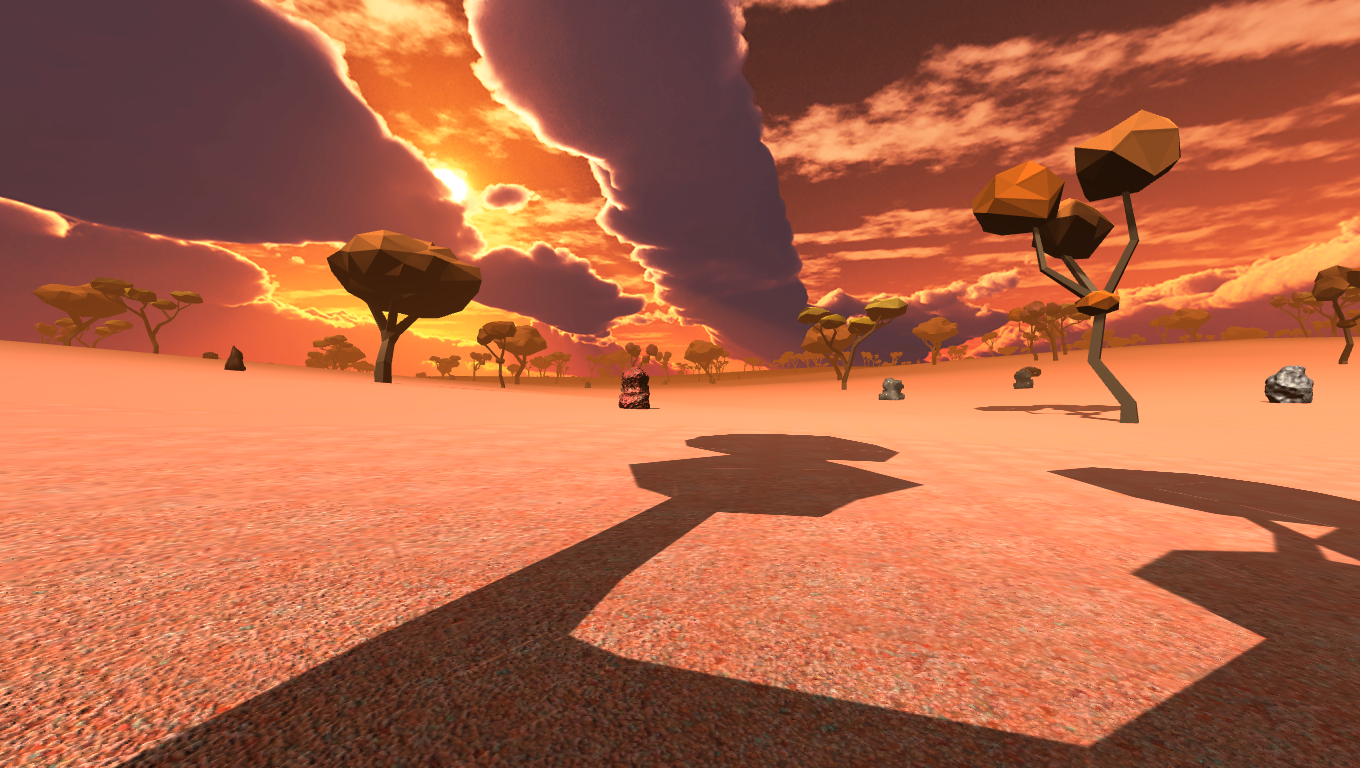 The Gliese 876 location has received some graphic improvements such as lighter shadows and fog.

File Based Save System

Saved games are now file based on all operating systems. Saved games can be found in the following directories.

Every saved world will have an associated .sav and .bak file in this directory. If your computer were to crash or lose power in the middle of a save operation and the file is corrupted, the .bak file can be renamed to .sav to recover your saved game.

Looking neat. I've been following your game for a while.

Do you like Unity? Any regrets choosing that engine?

Unity is great. No regrets. Linux support is a priority for me, so I prefer it to UE4. If i ran Windows, I would probably do more with UE4. Godot is looking pretty good these days too. I would really like to try it out. I hadn't heard much about it when I started making Quantum Engineering. Unity was the best choice to develop on and build for Linux when I started making the game.

That happened to me with my last game, it was too far along with a different engine. I only went to Godot for the next game. But I'm doing 2D stuff so my needs are different.

Linux is also my dev OS!