Continuing on the concept touched upon in the previous post about message logs in roguelikes, shifting the player's attention from log to map works in tandem with making more information available directly on that map. I like to summarize this kind of feature with the phrase "map dynamics" (from a UI perspective, not map layout), referring to animated visual aspects of the map that provide supplementary information such as various types of overlays and labels.

The simplest example already in use would be the highlighted line-of-fire projected from the origin when selecting a target. It shows the intended path of the projectile in a shade of either green or red depending on whether that path is clear of obstructions. (This line-of-fire preview can also be activated separately without using an actual weapon to target.)

Ally order visualization, a feature covered in an earlier post, also falls into this category. Here we'll look at all the new map dynamics features.

Mouse users can hold Ctrl-Alt to preview the path that will be taken to reach a given destination by simply clicking it. 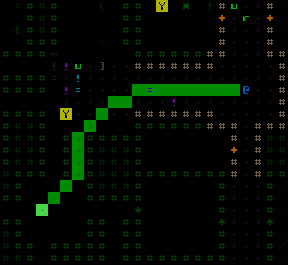 Sometimes the path will be updated while on the way to the destination if a more efficient one is found, though it won't deviate too much from the original.

Activating the range visualization overlay simultaneously highlights all parts of the map within view that any currently active weapon can reach, using a brighter color for areas targetable by more weapons (i.e. areas of overlap). Thus a varied volley of weapons will generally result in closer areas being brighter as only a subset of the weapons reach the maximum range.

The animation is optional--range visualization mode can be configured to appear instantly if desired.

Hovering the cursor over a weapon in the parts list causes a faint pulsating circle to appear on the map, centered on Cogmind's location (which is always the center of the map view, unless you've temporarily shifted it elsewhere). This circle is the radius within which that weapon remains effective. The weapon radius feature is mostly intended as a quick way to compare weapon ranges when activating/deactivating them, just as a reminder; seeing what specific locations can be hit is better handled by activating the volley range visualization. 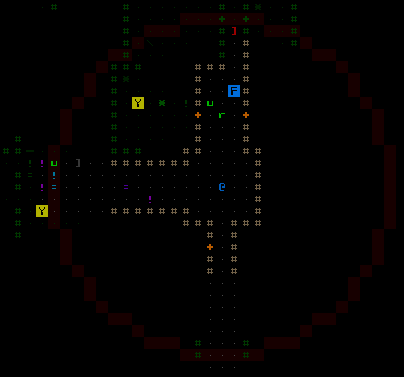 The radius is shown regardless of FOV or even whether an area has been explored.

Rather than forcing the player to check explosion sizes and count squares, targeting with any explosive weapon automatically shows a prediction of the average area of effect around the target location, taking into account both the explosion's falloff rate and terrain dampening (a given explosion won't blast as far through cave walls as it will through a door). Know that only an approximation can be shown because damage--and therefore radius--can vary (more so with certain types of explosions), thus the average value is used for prediction calculation purposes, with the actual AOE being somewhat smaller or larger in each case. (In reality it would look like a slightly spiky ball projected from the origin.)

Explosion prediction, with a little bit of animation thrown in for cool factor.

We'll continue to expand the map dynamics system with new overlays and functions as appropriate. Before long there will be a map object labeling feature similar to that seen in X@COM, allowing you to quickly see names of all parts and robots in view. Eventually there might be a map region overlay as well--that depends on the final type of map generator, which currently exists in generic form but has yet to be integrated into the game (current testing relies on the old prototype map generator).

One question though: from the explosion prediction one can conclude the distances in Cogmind are square, so is that final or can you opt ingame for circular distances?

Good question--the square look is actually caused by the small radius in this example's confined space, and the fact that the color-coding is handled in steps that happen to be larger than this particular explosion's falloff rate. This means that while it may appear square across the nearest few cells, it's actually circular and that becomes more pronounced as it expands further outward.

The difference in damage is not enough for it to be considered an inaccurate representation--each band represents a small range of potential damage, and the final damage is somewhat randomized anyway, so the square-ish corners in confined areas don't really make a difference. In general an explosion must expand out to at least four spaces before you'll notice it's a circle.

All ranges in Cogmind are calculated using circle distance, which I think works best in any game that allows diagonal movement.