I've been thinking, and Darkawakening has been modeling.

Lets just start of with the bad news, at least for you guys.

I'm not planning to include the mandalorians as a playable faction, or a faction at all actually. The main reason for this is that I'll have to include them into the whole new "class-vs-class" system, and modify the existing units, that would take me more time than I wish to spend on it. With me it's or do and do it good, or not at all, I'm not rushing a faction to completion, just to notice afterward that it's full of bugs.

Than the good news, Darkawakening has been working hard lately working on the Reaver tripod.
If you need a reminder: 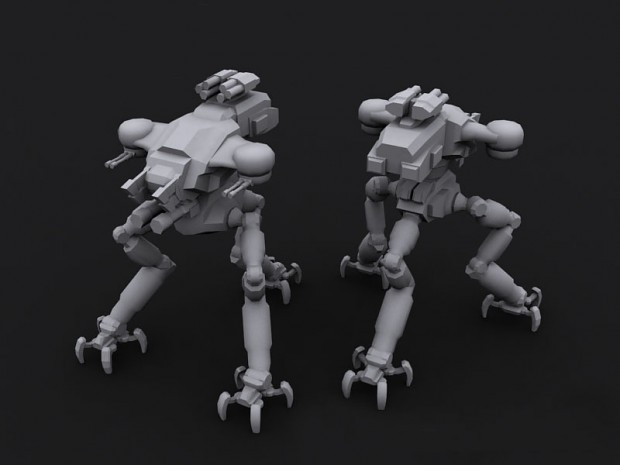 The walking and turning animations are done, and look very good, credit to the model to Helge129, he made it. Rigged by Darkawakening. There isn't much to show except for this picture, so that's all I have to show you.

Well I hope you guys aren't to disappointed about the mandalorians, I think I'll add some ships in space to be build-able at a space dock. That way you can still use some big guns to obliterate you opponent.
-Geroenimo

On a positive note with the Mando's it will be a little more cannon if you can only buy them as mercs (even if you don't care about canon), because the time you've got the mod set the Mando's are just mercs. The republic has already kicked their arses and left em scattered and not a unified faction.

well in actuality there were some organized factions left just nothing compared to what they were.

well if ya not going to do them can you at least make sure in your next version to fix all the bugs. air units need fixing ground units i hope you make them good and without bugs but i can tell thats not going to happen