For starters, we're getting the last units of the last faction finished out. Really exciting to close in on having all art assets finished. Units are 95% of the way there, as are environment elements. The biggest art gap that remains are FX sprites-- we realized that we were blowing our sprite budget on big, high frame explosions, which look nice enough the first few times they're used, but when you have only a handful of explosions for every effect in the game it gets old reeeeal fast. So instead we're redoing all those sprites to consist of individual elements: shockwave, dirt kick, smoke plume, explosive blast, whatever else we think of. I'll show the new system off here as soon as we have enough of the new component sprites finished.

In the mean time, new vehicles and other stuff! Like these two! 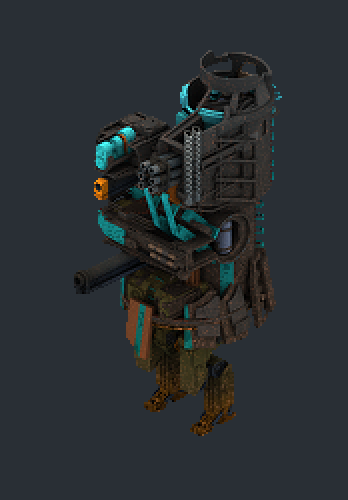 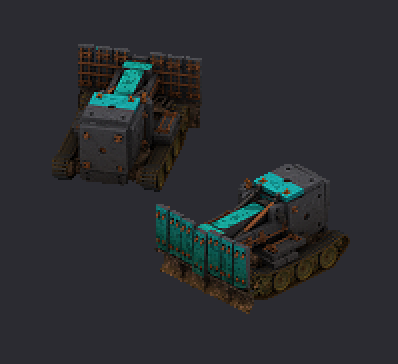 These are both Corvid units, the guy on the left being a late game brawler you can go up against, and the 'killdozer' on the right is designed to box the player in like the pink demons of olde (doom). We have directional armor in the game that works well, but realized we hadn't built enough units that really took advantage of that system.

I'm still plugging away at getting all the guns in; the various mines (4 out of the total 50 weapons) won't be going in for a while yet-- they're prototyped but the code needs to get cleaned up before going in permanently-- but everything else should be up soon. UI is still a ways out from us embedding proper breakdowns for these weapons into the game itself; the whole UI was hacked in to begin with and as such needs to be completely rewritten (which we're moving onto after the volumetric lighting gets tidied up, so if all goes well new UI should start going in towards the end of April). In the mean time, here's a sampling of the new guns...

Here's a shot of the heavy mount MIRV artillery doin some damage. Long time to target, but deals the most damage of any weapon in a single volley:

Heavy mount, flamethrower type. Notice how the unit doesn't ignite while the shield is still up. This weapon has the smallest AoE size of the flamethrower type weapons, but targets hit with the weapon will continue to burn for high damage if you managed to land sustained fire. This was a fun one to design and build:

Heavy mount, another launcher/artillery type (we'll be sure the final art makes for an impressive light show, and sufficiently meaty bass when firing). It's a blunt instrument-- hit practically anything with it, and it is no longer there. It's loud, but that's probably not something you'll be worrying about if you're packing one of these. Just watch your ammunition; large shell size means a relatively small magazine. Difference between this and the MIRV is that you fire at a much shallower arc-- much shorter time to target, but you don't get the same high clearance over the environment. Which is fine, because you'll just blow up any environment in the way anyway:

Heavy mount MG. We've already got a couple weapons that are ostensibly flechette based (need new art and sound to help reinforce that), but we've yet to do a canister round variant. I'd been reading about how US forces in Vietnam deployed a "Beehive" round. From the wiki:"Intended for direct fire against enemy troops, the M546 was direct fired from a near horizontally leveled 105 mm howitzer[2] and ejected 8000 flechettes during flight by a mechanical time fuze." We can't handle 8000 projectiles, but we can approximate. Extremely high velocity, and the flechettes go through practically anything. Plus, it's fun to turn infantry to mincemeat with it:

Last one of the heavy mount weapons-- I've showed this beam weapon here before, but now we've got a nice new sparking effect added in. We realized we could tie gib spawning in to weapon impacts. By creating a secondary memory cache for those that's separate from what's used for spawning gibs off destroyed vehicles and props, we can maintain a very high cycle rate and not totally wipe environment destruction:

Moving down to the main mounts, the 240mm Siege Mortar fires Disruption rounds, aka "glitter bombs". Shells packed with a mixture of various magnetic filaments and a small explosive charge (LORE ALERT) can completely disrupt even hardened shielding with a single volley (uses the same gib spawning effect as the laser above). A favorite for combating Spacers who eschew heavy armor plating in exchange for stronger shielding and armament, though still very effective against these heavy Loyalist units:

Also, rockets. Main mount, launcher/artillery type. Art is temp, borrowed the old MG muzzle flash to differentiate it from the cannons and MGs until we render new FX sprites. It can sustain the rate of fire shown in the gif with only moderate accuracy bloom. Very high DPS, but you'll empty your entire magazine very quickly-- the idea is that you're trading total magazine damage output for really high burst damage. Great for hit and run, or if you plan on swapping out for a new weapon soon. It's possible to use it efficaciously though, esp. if paired with with a high total magazine damage weapon like an MG: 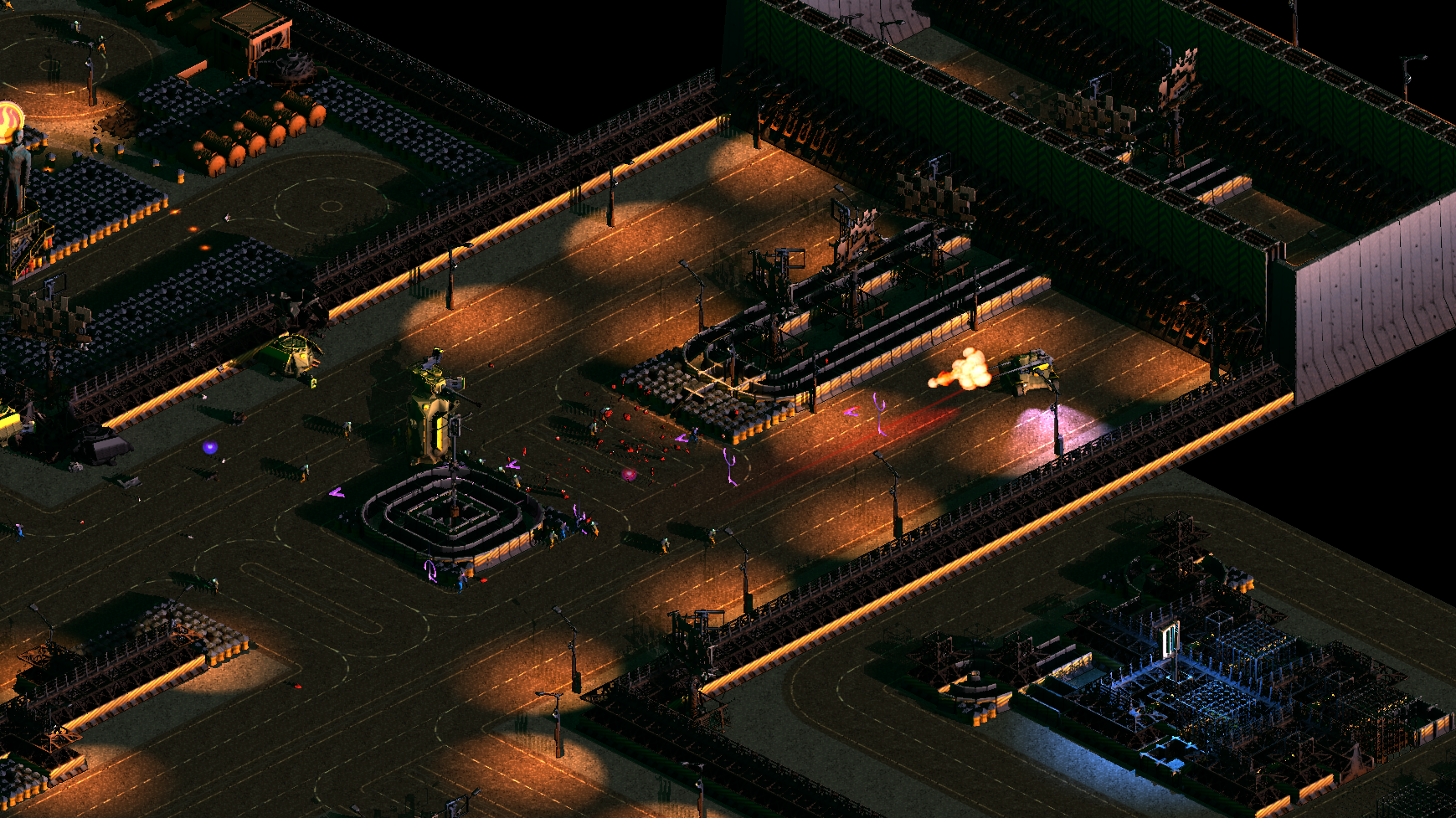 If you look at the lights, you can see that there's no atmospheric scattering-- in this old model, you could have a really bright light shining, but if no surface is hit then there may as well be no light there at all. The lights only lit other surfaces, and not the air. Compare that with our new model:

Thanks to the scattering effect, you can actually see the shape of the light in space. This gives us a whole lot more flexibility with how we light spaces, and what kind of global lighting conditions we can support in the game. Also it just looks way cooler 8)Here's an early test for the new effect. As we redo the game's lighting to account for this new effect we'll continue to refine it:

Something that's been a known issue but which we hadn't thought of an easy solve for was how the 'bulbs' of lights aren't actually bright, even with the new volumetric lighting in place. Take a look here:

The image on the left is what the lights currently look like. When you look at oncoming traffic at night you can see the beams and most particularly the headlights themselves - we didn't have that. What we realized though is that we could just attach a tiny fill light to the same mount points as the conical beams, which illuminates the headlights themselves. The only extra step we need to take is make sure that the small fill light is color matched to the main light-- if it's just white light you get the middle example.

So that's all the progress of the last ~4 weeks. AI, UI, sound, maps, and unit balancing remains. Lots of code, lots of content authoring, but a whole lot less than we used to have. Thanks for reading :)

Interesting, do you will include modding support for this game? Something like level editor, ability to code new weapons, etc?

While everything looks freaking amazing, i am having hard time with those explosions, they dissapear too fast, they lack of real punch, and they don't fade out properly, i don't know guys, they just don't look right.

@Xyus -- we'll be including the ability to make your own maps and design your own weapons and units. The art on the vehicles is intended to be modular, so you can swap out uppers and lowers on vehicles.

@Gunship_Mark_II -- explosions effects are almost two years old, and are currently being redone.

That's some great news, thank you for clearing out both of the questions. I am quite fascinated with your game's art style, i haven't seen such games in a long while, but you managed to combine isometric 2d stuff with so many awesome lighting features, it's mindblowing. Keep up great work!