This update we show the event system for Lost Hope. It consists on series of dialogues and animations. The dialog is shown in a dialog box to maintain immersion.

Lost Hope is a game where interaction with other characters is very important. That is why, in order to give a complete experience that looks fluid, we planned the event system.

This event system consists on series of dialogues that trigger different animations. We did it this way so that the game does not feel static.
The text is shown in a dialog box like this:

Basically, the “actors” are controlled by a script and a text is loaded from a file depending on the situation.

There is a lot to do.The next thing we must do is let the player decide between various options during dialogues, that way the conversations and events can take different paths depending on the player's decisions.

A simple demonstration of the event system

In order to make an awesome game and make the most out of the event system we are designing significant characters that will have great personalities. We think that interesting characters with intriguing dialogues will make of Lost Hope a memorable experience. 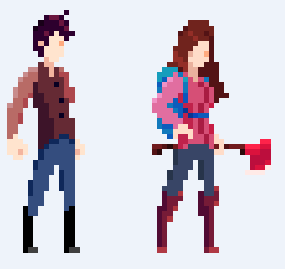 The animation looks so nice, congrats!

Thanks again Kazumo! We try to make them as fluid as possible!