Little God Story was initialy meant as an action/adventure game. The way to win was to go fast, jump at the good time and other action stuffs. That is why the third person view was previously chosen. But this view is not perfect. A lot of third person games have camera problems, making them less fun to play.

Little God Story evolves. Now, it is more a puzzle game than an action/adventure. There is still a plateformer, but it is more a reflexion game. Activating switches and machines is the core gameplay of Little God Story. So maybe is the first person view more adapted. 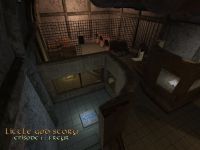 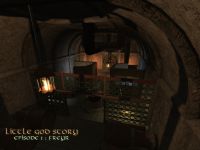 Episodic release has advantages. One of them is that you can bring additional features that did not exist in the previous episode. I do not want to change only the location for the episodes, I want to give Belzaran new abilities to add gameplay diversity. A puzzle game can become boring, new episodes have to change the player habits.

So I think that the episodes will not be Earth/Water/Air/Fire. The first episode will be centered on the Elements and the other on other stuffs. I have ideas, but I have to think about the first episode now. This one will have the four parts of the four Elements. 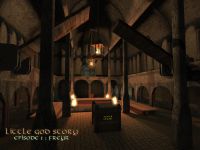 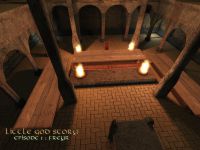 What about the Release ?

Episode 1 will take in four places. Belzaran begin in Earth, visiting underground castles. This part is nearly done and will be "soon" playable. A tutorial is well advanced and will maybe released as a demo.

i hope the episode system wont destroy the game, sadly that easily could happen. In your case it seems like you have a plan which hopefully will work.

i beg to differ.. The Ball seem to be doing great with episodic installments.

Great idea for a UT3 game though. and yeah id stick with FPS. :P

Can't wait for this! It's walways interesting to see what people can do with the UDK!