Little God Story is a puzzle-game. That is why the game will be linear. I try to design puzzles that can be solved in different ways. To go to the next room, you need to use elements to run faster or jump higher, but you need to activate buttons or destroy/move objects too. All the actions have to be made in an order, but it is possible to add some possibilities that allow the player to choose what he want to do first. Without that puzzle design, the player will try to find the good way to solve the puzzle, without trying to understand why it has to do that.

A problem in Little God Story is to know what the switch you activate will do. I add first cinematics, but it is often boring and interfere with the immersion of the player. I re-design some rooms to allow the player to show what happens when he activates a switch. 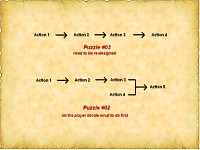 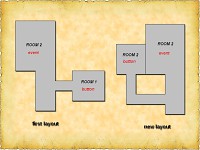 Another important think in level-design is to prevent repetition. In Little God Story, there are two main sources of light : switches (white/blue/green) and fire (orange/yellow/red). It is a great combinaison that works well, but I can not make a whole game like this. I opened some areas, making the castle looking like a ruined castle. The blue light of the sky add diversity in the level. 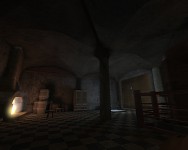 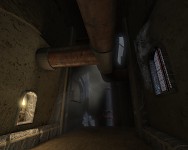 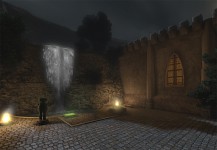 There is a lot of things to add to Little God Story to make the game fun to play. But it is already playable. It try to make Little God Story becoming more dynamic. With a second weapon, the Air weapon, you can move some little objects that can not be touched. For example, an object can be moved to activate a switch which is unreachable. Using the weapons is more fun that activate switches but it brings some problems, with the physics for example (physics are harder to control that scripted sequences).I try to add some skilled sequence too. The platformer aspect of the game has to be improved. The player will need to combine elements to go through traps. For example, the player uses Air to jump, then Water to go through Fire. Once more it adds a dynamic aspect to the game.

Looks very cool. The sound track in the #01 reminded me of Myst.