Glass Blocks:
Glass blocks have been added! You can now watch the magic of the liquids through the safety of lava-proof transparent aluminum! 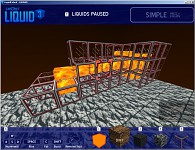 Building Outside The Boundaries:
In versions 1.0.1 and below, it was kind of annoying not to be able to edit blocks while outside of the boundaries. Now you can! 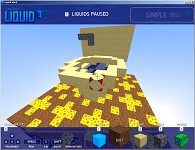 Pause and Simulation Speed Saved With Maps:
This is particularly nice for maps like the volcano, or other levels where “3 simulations per second” just doesn't quite look as cool as 60. 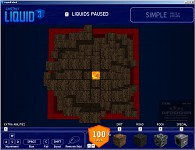 Optimizations For ATI Vdeo Cards:
Although we're having difficulty confirming the results of the optimizations (six machines, all nVidia...), according to ATI's GPU Analyzer we should be all clear of graphical errors. Be sure you're updated to the ATI drivers 10.2 and above, and let us know if there are still any issues!

64-bit OS's Should No Longer Crash:
This was a simple issue with XNA and our building the .exe with “Any CPU” instead of “x86”. XNA's drivers are 32-bit, so when you export as “Any CPU”, it'll allow the 64-bit OS to look for 64-bit drivers, which it shouldn't be doing, because they're not there. Long story short, it's fixed now.

Autosave Every 2 Minutes:
Your PC crashing is frustrating, and not conducive to a creative environment. Liquid Cubed now saves a backup every 2 minutes, adjustable from the “Settings.xml” file if you'd like it sooner than that.

WyUdate:
We were looking for a way to make updates easier to deploy and easier to download, and stumbled upon wyDay's “wyBuild” software for managing tiny-patches. WyDay's software makes it a breeze to setup patches to download, and even easier to actually obtain only the necessary updates. We prefer to build these sorts of things ourselves, but we're rather pressed for time for the next month or so, and love that wyDay is dedicated to ensuring the updater works, and works well.

If you already have versions 1.0.0, 1.0.1, or 1.0.1b, we'll be uploading specific wyUpdate.exe's so you can patch to the latest version without re-downloading the same files all over again!

Future Plans:
The current priority is to finish our nearly-finished Warcraft vs Starcraft mod, but we're also going to try and get some time in on the weekends to gradually improve LiquidCubed until we've figured out where its fate will lie. Markus ("Notch") is notoriously difficult to get ahold of, but we would really like to see the algorithm used inside Minecraft.

In anycase, even though show-stopping bugs should always come first, our plan next weekend is to be working on adding Fish, crabs, and rubber duckies(?) to interact with the water, custom resolutions, an Options.exe, and a CompatibilityCheck.exe to make it (hopefully) easier to check if your machine is compatible.

Now, If we were to recode our rather shoddy rendering code, we could enable larger maps. This would take an entire weekend without other improvements being made though, and we would like to add in some more toys (like fish, etc) before making this rather extensive upgrade. However, if it's more important to you all to see water coming over the mountains, we can oblige!

I vote mountainous rivers! I can wait for them though, if you really would prefer adding some toys go ahead. It is after all, your "game". :]