We have a lot of changes to go over, so let’s get started. First the fun stuff: two new weapons have been added. We now have the Tac-1, which has a faster rate of fire than the usual shoulder mounted lasers at the cost of attack power. We also have the double laser; this weapon can only be used by the 808, and packs some serious firepower.

There have been various tweaks to the games style by Cerebrate. Missiles will now lose their target in clouds, the laser beams have been given a bit of a facelift, and various parts of both the menu and HUD have been upgraded. Switching maps via an in game menu is now possible as well.

The muzzle flashes from ballistic weapons now generate real light, which adds a nice touch to combat. Those weapons also eject bullet casings now! Explosions are once again fluffy and pink; I know you’re all thrilled.

The Spearhead
We’re quite excited about the Spearhead! It’s going to have a completely different control scheme than all the other LFOs. There will be more information on that once we have it in game; I tried to finish it before this news post, but I’ve had some seriously busy weeks. I will post pictures as soon as it’s done! 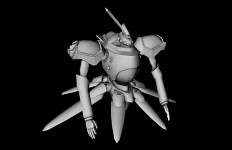 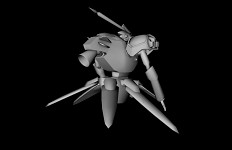 We are all working hard to get this thing finished. Thanks again to all the support you guys have given us; we’ll be back again next month!

Yep! Keep it up xD

Cheers to the team,
CW

Nice one guys! I like the idea about the missiles losing it's target in clouds. And the Spearhead... Oh yeah baby!

Wow it's looking fantastic! I bet this is gonna be the best Eureka 7 game ever!

oh and i still wonder how you'll make the spearheads flying technique(sorry for my bad english skills :D), its just my opinion but i think it could be able to fly with and without the board :D

Looking great as always. Keep it up!

Looks better and better every time I visit! Keep it up!

this is the worst mod

Most Awful, but what can you do? Play with what you are givin. :P

This mod is so bad it's like they didn't even try.

I think doug and tech are cutters.

I know it's your mod tink, but let's face it: it's pretty half-baked.

Totally. I wouldn't even call it a mod!

Your moms half baked!

This looks phenomenal...
I just recently found this mod, although i've been a long time fan of the series, this is like a dream come true.

You guys are true geniuses, and i'm sure i speak on everyone's behalf when i say this, but,
Thank you oh so much for doing this.