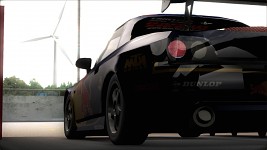 New version of LFS graphics mod made by me is comming. This time i'll give you more photorealistic look, and more realistic HDR than ever before in LFS!

In this version i tried to achieve most realistic vehicle paint and reflection look. I am proud of it, because i wasted so much time on this (astonishing in my opinion) effect. New shaders, shader multipassing, working Cross Process shaders, realistic HDR, multipass Gamma sharpening, color bleeding, accurate SSAO and SSIL.

I've made "teaser" video which is associated with upcomming "tutoriallike" videos.