Post news RSS Let there be lights! And planets... and moons

The design of the 6 arenas in which you can choose to play Asteroid Miner have been finished. In this post I'll show off the screenshots and talk a little bit about the design process.

The six stages were all created by making a tileable star field in Gimp and then loading it as a sky dome in Blender. From there, I rendered the image out to a panorama so that it could be used for image based lighting within Unity using the Lux shaders. This setup is great because it allows the light on the asteroids to accurately reflect the scene that they are in, so each scene will have a unique feel to it.

I broke the 6 levels into design groups: 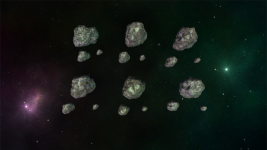 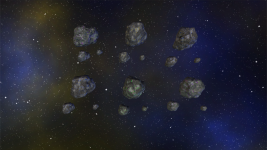 These first two are just cloud nebulas with no planets. The first stage has changed a bit since this screen was uploaded, but not enough to warrant another upload. I just brightened the stars a little bit because I felt that they were too gray and dull. 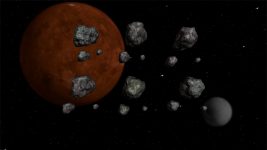 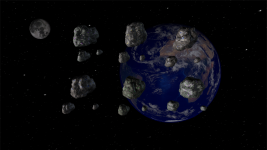 The next two are just planets with no nebulas. These images have also changed slightly since the upload. Unlike the first two, I didn't use the original Gimp texture for the background, opting instead to use the skybox as rendered by Blender. It looked great when viewed individually, but I didn't think it was consistent enough with the other images. So the latest versions have stars that more accurately match those of the other stages. I also got rid of the blur that I added to the edges of the red planet and its moon. I decided that I liked the sharper look better. Since the asteroids themselves are sharp it helps the whole thing blend in as a cohesive scene. 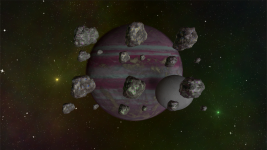 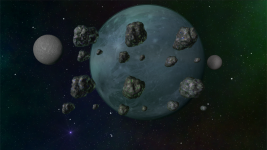 And finally we have the two with the nebula clouds and the planets.

Using the skyboxes as IBl the way I did will also cause the stars and nebulas to reflect in any game object in the scene. The asteroids aren't very reflective, so it isn't easy to see in the screenshots above. It will be pretty subtle in anything but a mirrored ball, which won't be in the game. But there should be some nice shiny metallic or glass objects making their way into the game that will really help bring out the individual character of each of the stages.