Frankie goes behind the scenes with a walk-through about creating the art for one of the monsters from Legends of Firestorm, the Pig Boss.

Hi everyone, Frankie here. With our Kickstarter campaign pushing on I thought you might like to see some of the art process behind making one of the monsters, the Pig Boss, he’s going to be one of the first really nasty guys you encounter. 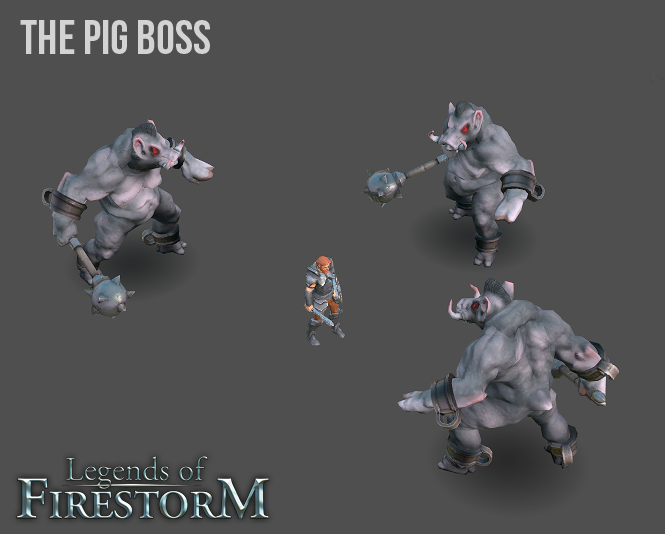 Here’s three of them surrounding my player. Early on we decided to go for normal mapped characters because we knew we wanted a full time of day and weather system meaning the assets will have to react nicely to the lighting changes.

This model was done with Blenders dynamic topology function, I found it amazingly useful, cutting hours or even days off the time it takes to make these sculpts as well as keeping the whole process less technical and more creative and resulting in interesting models. I’ve dug out the history of this model sculpts so we can see how it progressed, older versions on the left to newer on the right. 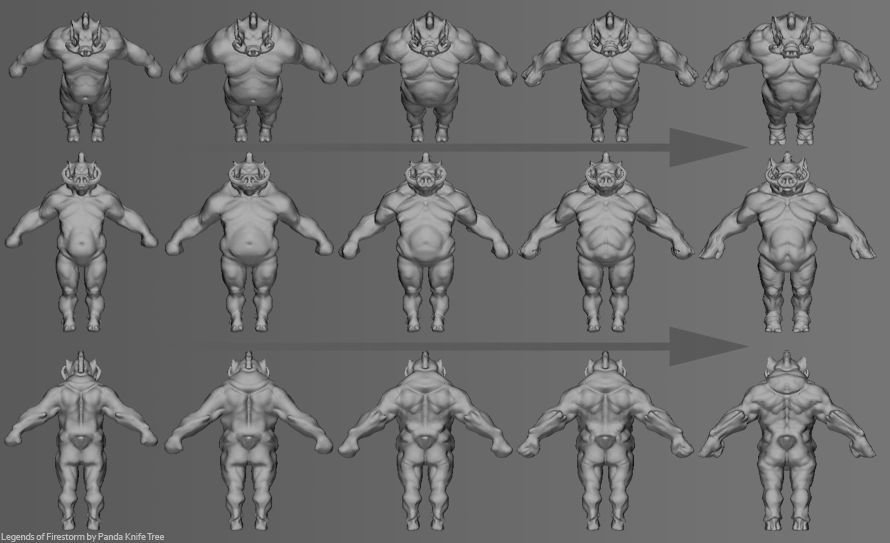 Every step here is where I tested in game, I’m the only artist making all the assets for a MMO so trying to waste as little time as possible is vital! At every step I loaded the high poly model directly in game to review and then work out what I needed to do make it look good from our view and that I didn’t head in a direction that was unsuitable for our game. It also stopped me from adding unnecessary details hence why the sculpts look a little bit loose in some places, at this point I was getting to one polygon per pixel in our game view so any more detail would be unnecessary. As a nice side effect I felt like it let me explore a lot more interesting shapes, before I had always felt constrained by overworking one area then not wanting to make drastic changes and loose work, I can’t stress enough how good dynamic topology was for this kind of work. 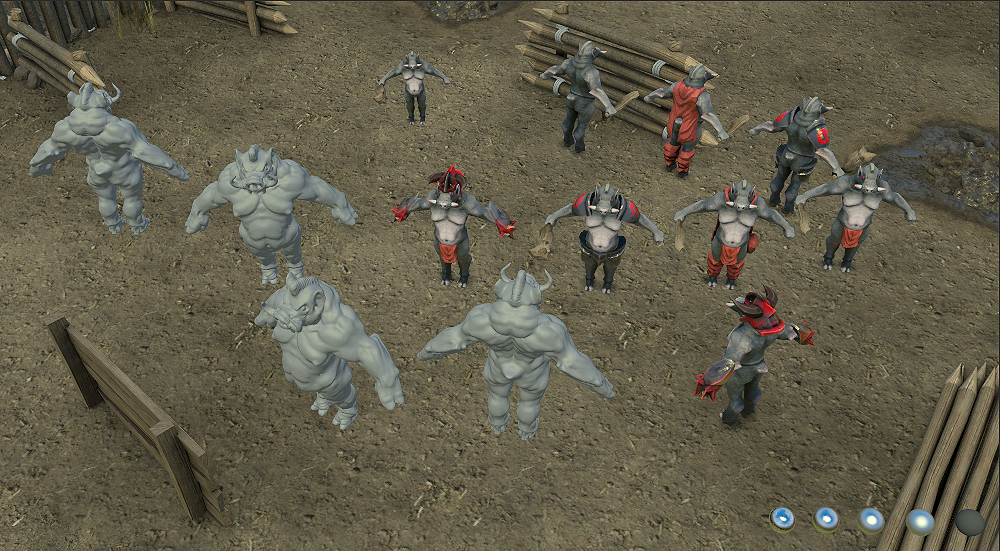 This is one of the test scenes I was working from, on the big pig the shapes are smooth, the lines are sharp and his silhouette is different enough from his smaller friends so it’s close to being good enough. Probably 2 steps from the end I decimated the mesh, baked a normal map and threw it on a rig so I could test out key poses and articulation. With previous monsters I found that it may have looked good in a static pose but couldn’t move and achieve the range of motion and require extensive rework, another possible time waster. 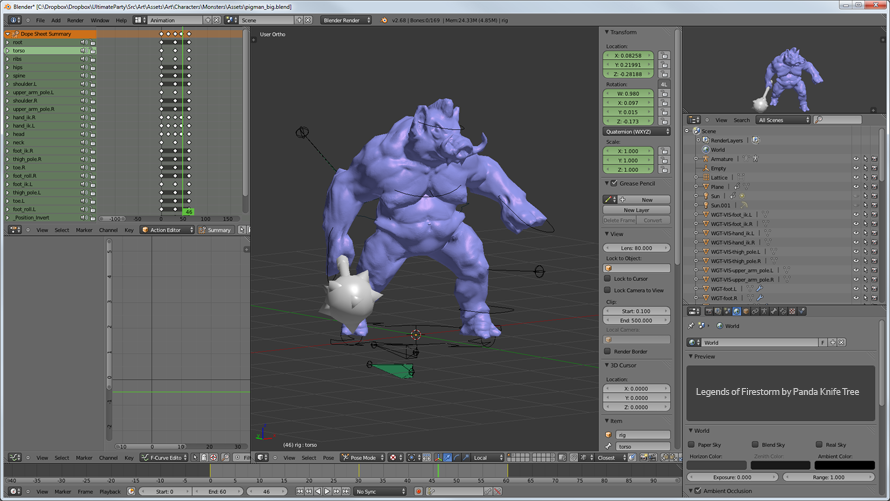 This is the model rigged and animation begun, using rigify the blender add-on has been a huge timesaver, quick to test, easily adjustable and standardized between files so I can copy animations between models if needed. At this stage I've probably thrown a quick texture in game but really I’m still deciding if the model is good enough to call final, it’s quick to change proportions and rebake but not so easy to quickly adjust textures to match uv changes. 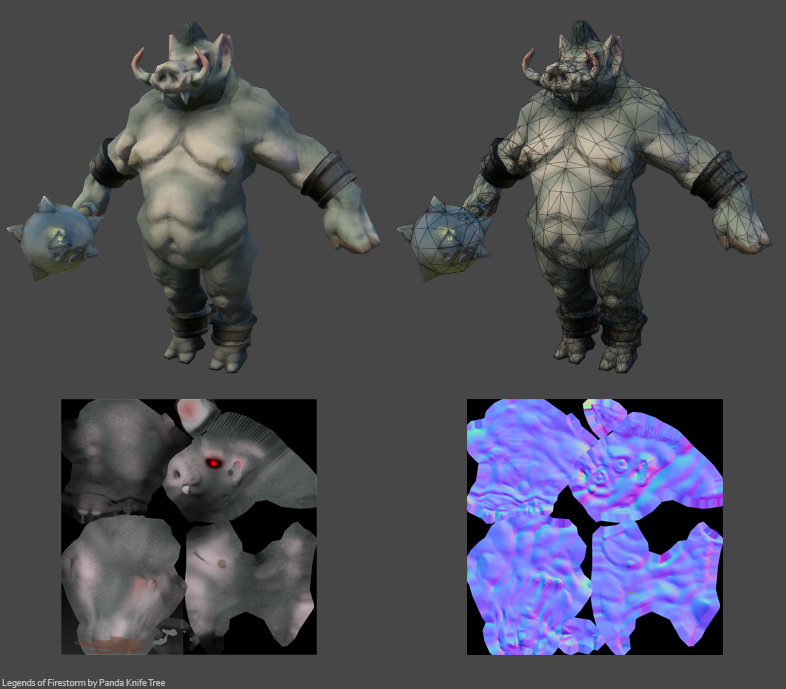 This is more or less the final guy now. As our game camera is fixed it lets me take a lot of shortcuts that most people wouldn’t dream of, the low-poly model is basically just the high-poly decimated model, I fix errors, turn edges and add supporting geometry when I see the problems arise in animation or game. I’ve actually found that decimating does a better job than I would do by hand, especially in keeping the silhouette looking smooth and shapes natural and in a fraction of the time. The UVs are also very rough, it’s a quick seam, pin and relax; I don’t have time to become obsessive about them and on the few cases I have tried to improve them there’s been no visible benefit in game. I author at 1024×1024 and downsize in Unity3ds texture setting, in most cases the model is not on the mip boundary so the texel density is already higher than it needs to be, if it is on the boundary and it makes a difference I just up the texture res and take the memory hit. Just as an example the pigs using a 256*256 dxt5 and 256*256 dxtnm textures taking up a total of 170KB, not something I need to worry about.

That’s pretty much it! The whole process took 2 or 3 days but we’re still expecting to tweak the animations to make sure it’s fun to play against.

If you enjoyed reading please check out our Kickstarter and leave a comment below or tweet us here twitter.com/PandaKnifeTree