Some developer banter about the forest part of the campaign, and a few new screenshots of the forest and underground maps.

A few days ago, we unveiled our new project I Hate Mountains and this website was already visited by more than 3,000 people. This is quite impressive and it motivates us for the next part of the development. We'd like to thank you all for your support and your confidence. It's now our job to try not to disappoint you, and believe us, it will not be the case.

Talking about the campaign, here's some fresh news.
In our first level, the forest, a big part had to be reviewed and redone after the release of Left 4 Dead. At the beginning, it was quite an impressive and vast open-space: fun to play, hard to optimize and finally... it had some problems to fit in the Left 4 Dead gameplay.

Making a Left 4 Dead level is not only a question of level-design and geometry. You can't build it and play it straight out of the box like most of Valve's games. You have to complete another important task, the nav mesh creation. The goal is to mark the paths for the game, these nav meshes contains a lot of informations for the artificial intelligence. Where can survivors and infected walk ? Where is the event ? Where can they respawn ? and stuff. The Director also needs it to build the gameplay during the game.

Problem is, when we got our first playable version of the level and tried to build the nav meshes, the process took three hours to reach 1%. Finally, we never managed to get a fully working version of the level. The game didn't knew how to compute the path from the spawn point to the first safe room because there was way too many combinations in this vast open-space.

Conclusion ?
We found out that Left 4 Dead was not really suitable for open and vast environments. Something had to be done. This is why I spent the last weeks trying to transform this open-space level in a corridor-like version. This is not something we wanted to do, but we had to resign, and after a lot of talking and babbling with the team members, we found several ways to transform the level without loosing this precious open-space feeling.

Today, this first level is mostly finished and we believe the creation process recently reached 75% (unless the late release of the SDK messes everything up, wouldnt be such a surprise).

Concerning the other levels of this campaign, our progress is constant. The third level is already beeing tested right now. We're trying to push the director to the limits, forcing him to make mistakes and telling us what's wrong with the level and the nav meshes.

Stay tuned for more developer banter until the release.
PS: the screenshots section is open! 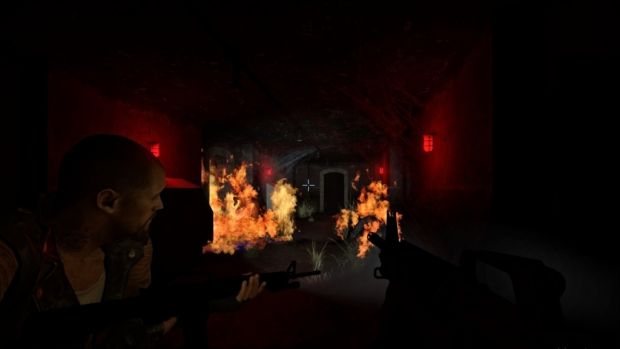 This is looking so good already! Can't wait to see the finished product!

Are you guys using any custom models or textures in this project?

I like the sounds of this! but yeh thats harsh that it doesnt like open spaces, not surprising though :(

What comp were you building from?

HL2 has never worked well with open spaces unless designed correctly. And are you sure you're using the nav meshes properly?

Shots look good except they're too dark, can't see much :)

pretty awesome stuff here. Screenshots are fantastic gald to hear you saved most of your forest levels. Looking forward to play your campaign.

Kiddin', I know what the Director is :p

God I love this game, what other game do you have to worry about an AI director. It may add some challenges to making a good L4D map but I love the re-playability :)

I wish L4D was just a game where it dropped you inside a city like 1,000,000 miles wide and you had to scrounge for food, weapons, and other survivors all with the Directors capabilities. Who knows, maybe a modder will come along one day and change EVERYTHING!

I think you posted in the wrong topic =)

congratulations, you finally learned the first thing that most Source designers learn right away. And you even mand a news post about it.

And pointing this out makes you really interesting.
Left 4 Dead has some specificities in the way nav meshes are built, never had any problem with open spaces before.