I've been working on LBKR for a few years now, but since I haven't put much effort into marketing the game I suppose most people don't really know much about the road so far, or atleast what was going on up until I started posting about LBKR here on IndieDB, so I thought of writing this article in order to give you a glimpse of what's been.

LBKR was initially supposed to be a scrap project for me to fiddle with while learning the fields of game development that I were learning at the time, namely coding, 3d and 2d graphics.
In the beginning it was more of a Diablo-ish clone although, a thousand times shittier of course, with a fantasy/fable-ish environment, skeletons and mega-sized turtles fighting the player in a medieval world.

As I grew fond of the game and decided to continue to work on it but with the goal of having it to be an actual game and not just a learning project, I did the same mistake that i've noticed alot of other amateur game developers do- beeing far too optimistic and I set near impossible goals, that ultimately led to the loss of motivation after a while. 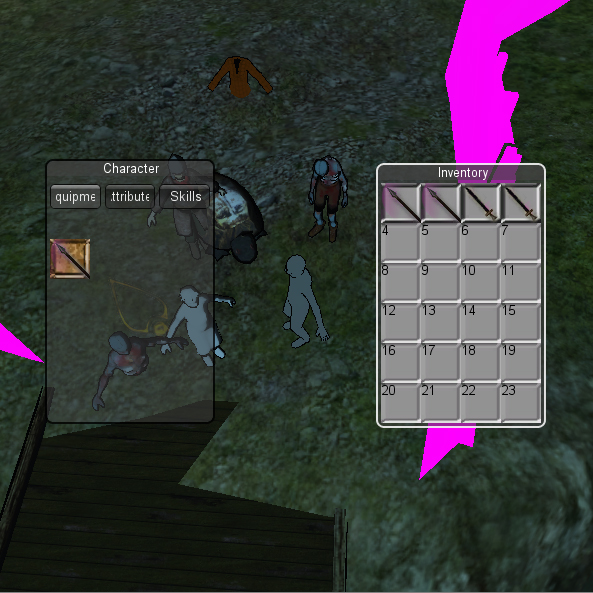 After a few months I decided to scrap what I had made so far and start over.

I had found it difficult to come up with ideas for missions, characters etc. for a fantasy world for some reason, could of course have had something to do with the loss of motivation but anyways-- I did some major changes to the game world for v2. Instead of earlier mentioned fantasy world it was now in a more modern city environment, also the gameplay shifted to more of a survival-style gameplay.
Instead of magical abilities the player could collect various gadgets to help in combat, like mines and grenades etc. 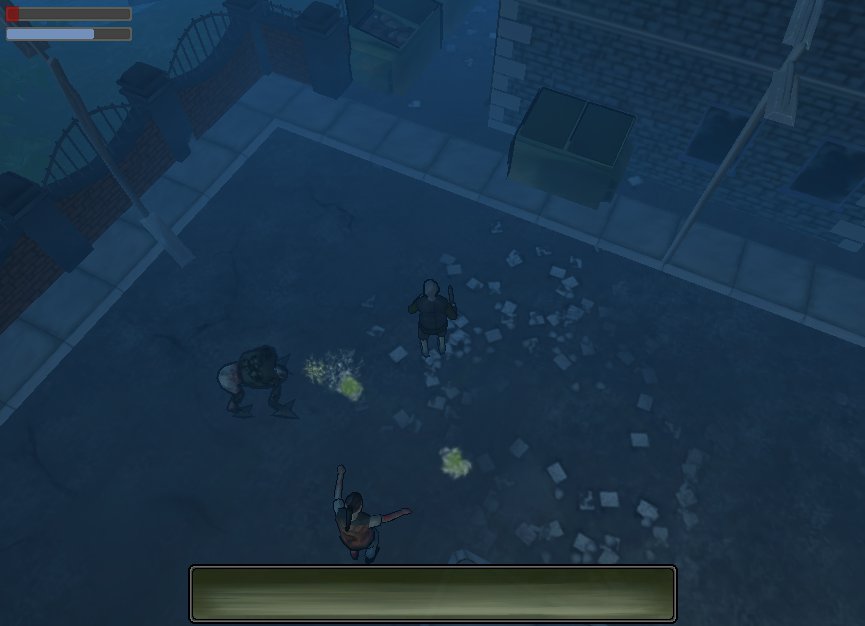 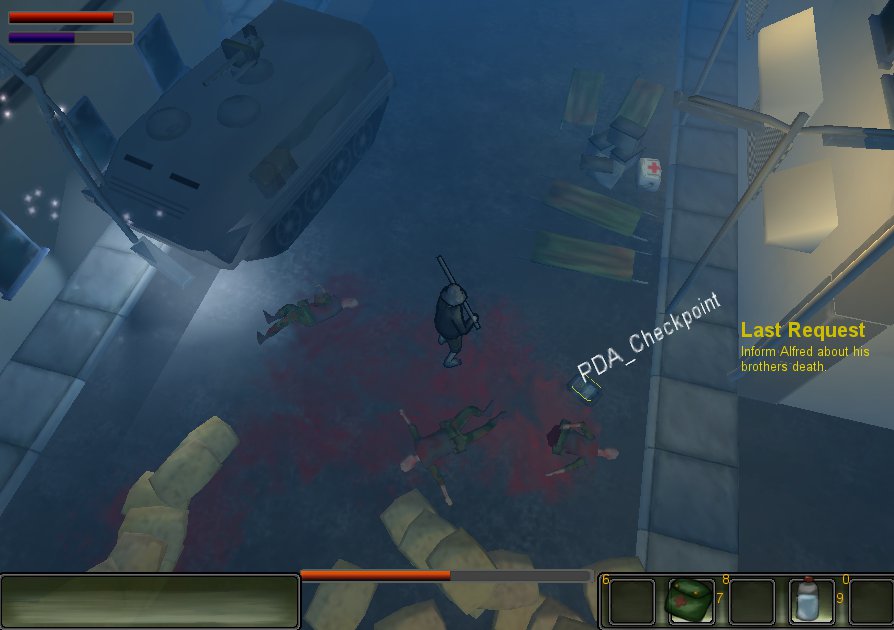 After some time I noticed that I had become alot better with the 3D and 2D art, and most of the graphics in-game were outdated, and I began having a hard time to get my new models to match the quality level of the old ones that were already added to the game, and on top of that I did hit a wall with the level design. 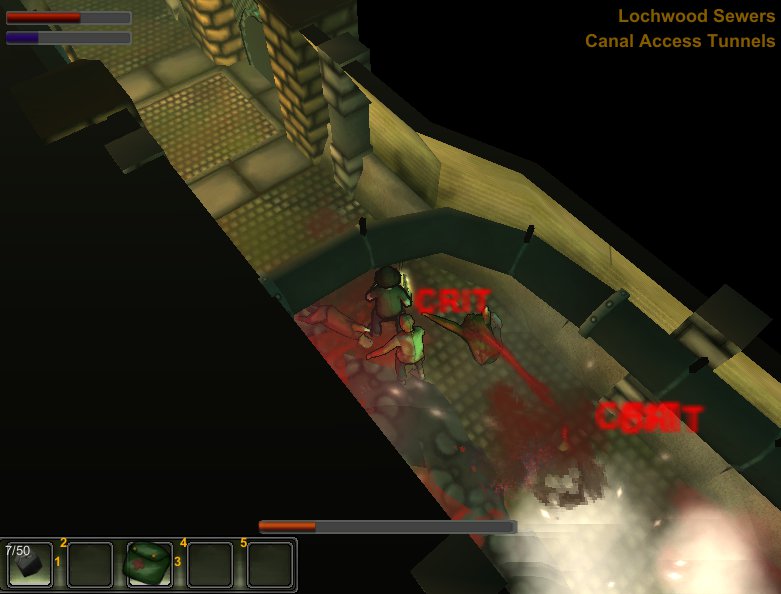 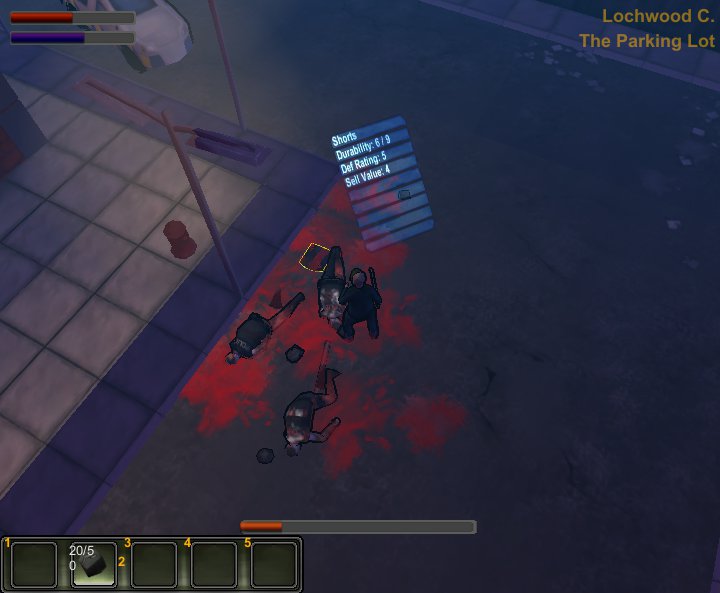 As the levels in LBKRv2 were rather large chunks of a city with a non-linear gameplay style the levels to a long time to create, simply because of that I did start to feel slightly unmotivated, but also there was the fact that I in the end I had made the same mistake as in v1 and set unrealistic and overambitious goals.

I did a major overhaul on the graphics of the game, and restarted the project, yet again.
This time I had managed to create code for the game that was actually of so much use it could be re-used for the new version though so I didn't have to start over from scratch atleast. 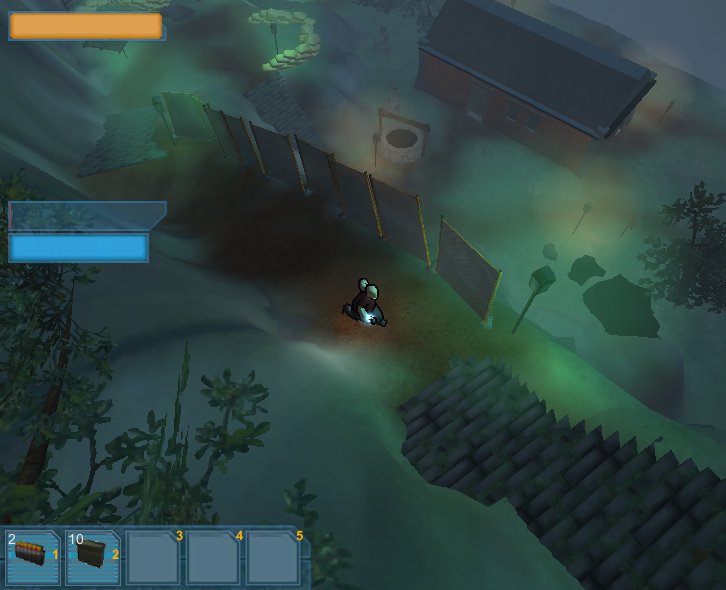 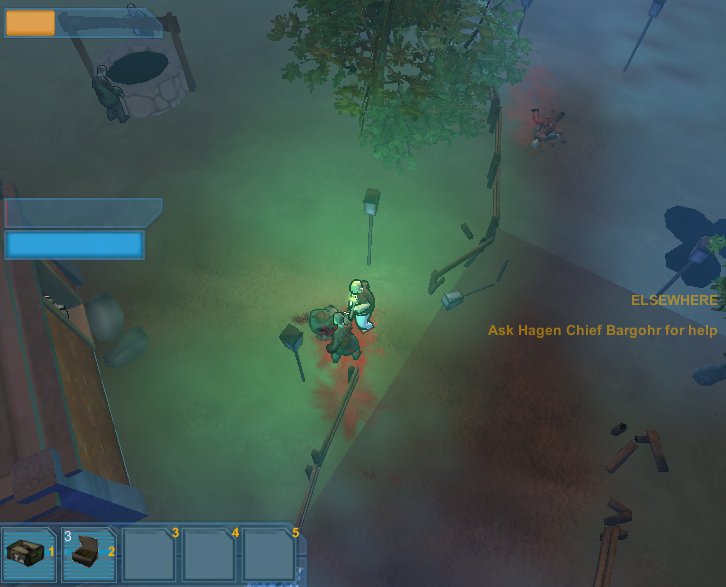 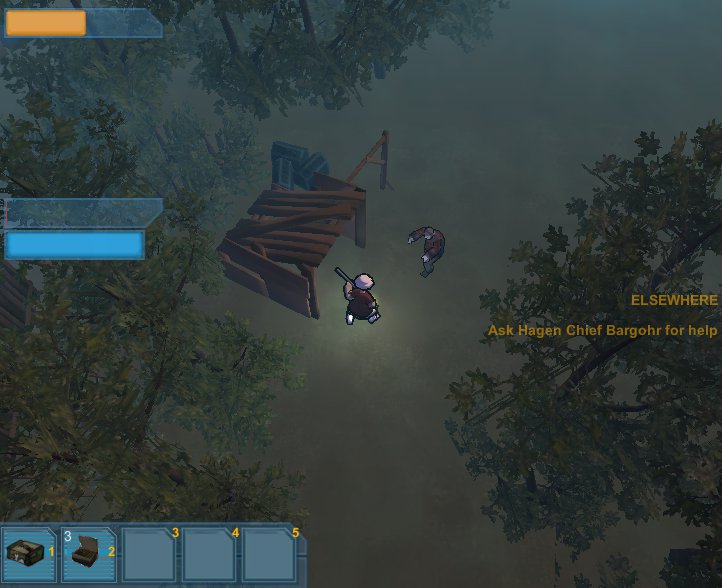 For v3 I stepped back into the fantasy-setting, yet the gameplay remained more in style of a survival game as it was in v2. I never really got very far with this version, since I after some time remembered that I suck at writing stories and whatnot, and I had trouble to make the game levels feel interesting, they were mostly just large fields of grass that I didn't really manage to come up with any good ideas of content to fill them with. 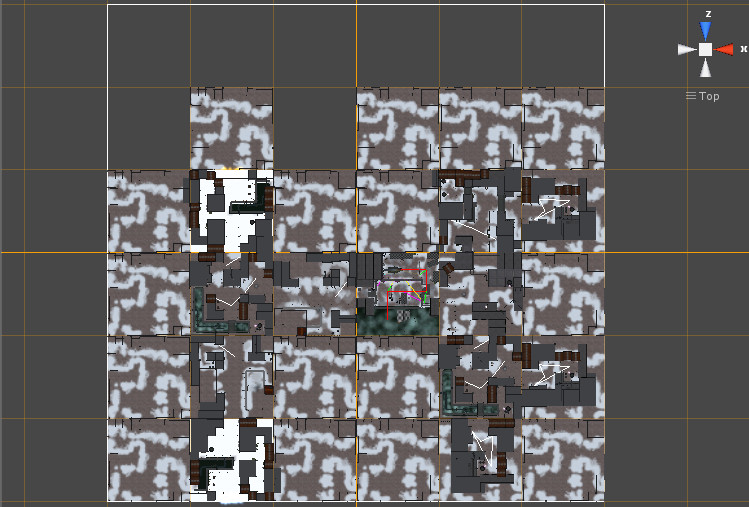 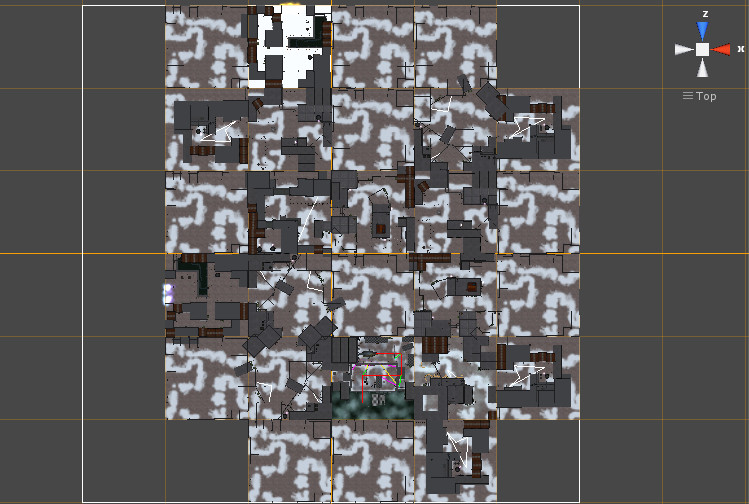 It was during v3 I started experimenting with randomized level layouts though, which was in the end a great help for me in v4 when creating the maps of the IGCC space station.

The final version, ie. the version/state LBKR is in today kept the graphic and art-style from v3 but I had done some major changes to gameplay aswell as the approach I used in general. 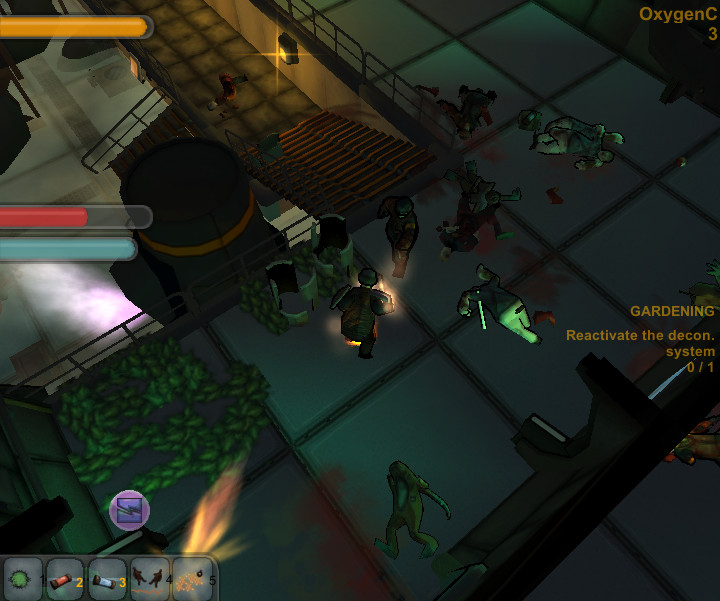 I had become sick of trying to come up with stories and large open worlds, so this time I decided to make more linear levels, I did keep the level-layout randomizer from v3 though and simply built the game's levels with small square chunks of geometry that were later placed by random as the level started. 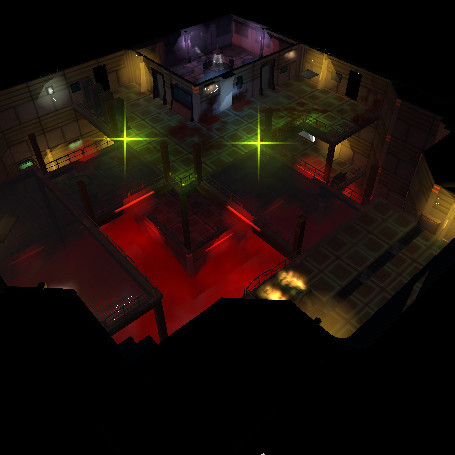 From the start I hadn't come up with any story, and this was actually intentional. I decided to focus more on the gameplay, which I had also changed from a slow-paced exploration/survival style to the more straight-forward kill-everything-that-moves. Also I had greatly decreased the scale of the game to a more appropriate size for a one-man developer team, from having planned a bazillion of story-missions and a bazillion of large open-world-ish maps I now had 5 maps with 5 story-missions. While I had not really come up with much of the story, I did have some basic ideas and concept laid out, just enough to know how I wanted the environments and characters to look like. 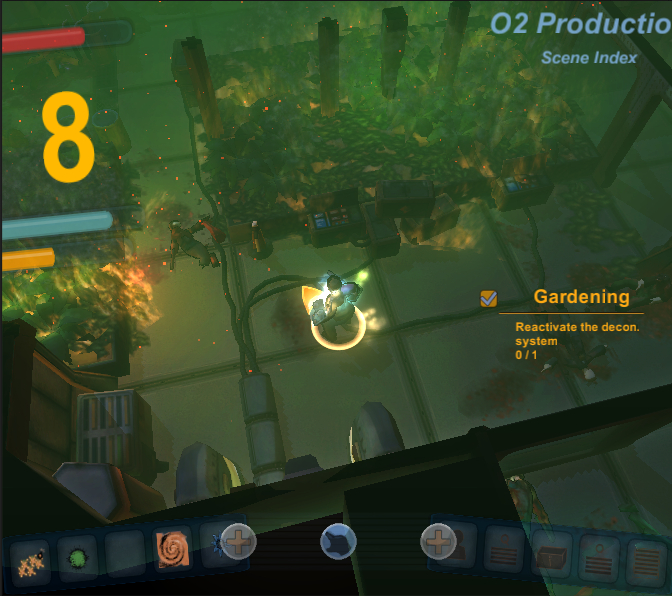 As far as I can recall it took me about a year to finish the new version, finish in the sense of main storyline and gameplay of the 5 chapters(maps) that is, and actually having a playable build. After that I have continuously added content to the game, there's now a total of 22 missions and more to come, bounty contracts, multiple mysteries and secret areas, 2 extra sub-chapters, several challenge-mission maps (that unlike the default maps, actually are more in the style of the maps in previous game versions, non-randomized and usually larger in scale), the background story's more or less done and alot of world information's been added through log books and such.

It's actually come to be a more complex story than I had for my earlier attempts (v1, v2 and v3) even though I for the earlier versions had put more focus into the story...

Despite the fact that it's the fourth time I restarted the development, I've still been able to use some of the assets and code created in earlier versions, just to give some examples:
Fishman: A small fish-looking humanoid creature that was used as a monster of Swarmer type in v3, I did continue using it as a monster for a short while in v4, but it didn't quite fit in so instead I placed it inside a large glass-tube and it can now be seen inside said tubes in Chapter 1: Medical Labs. as an unknown species discovered and examined by the IGCC scientist crews. 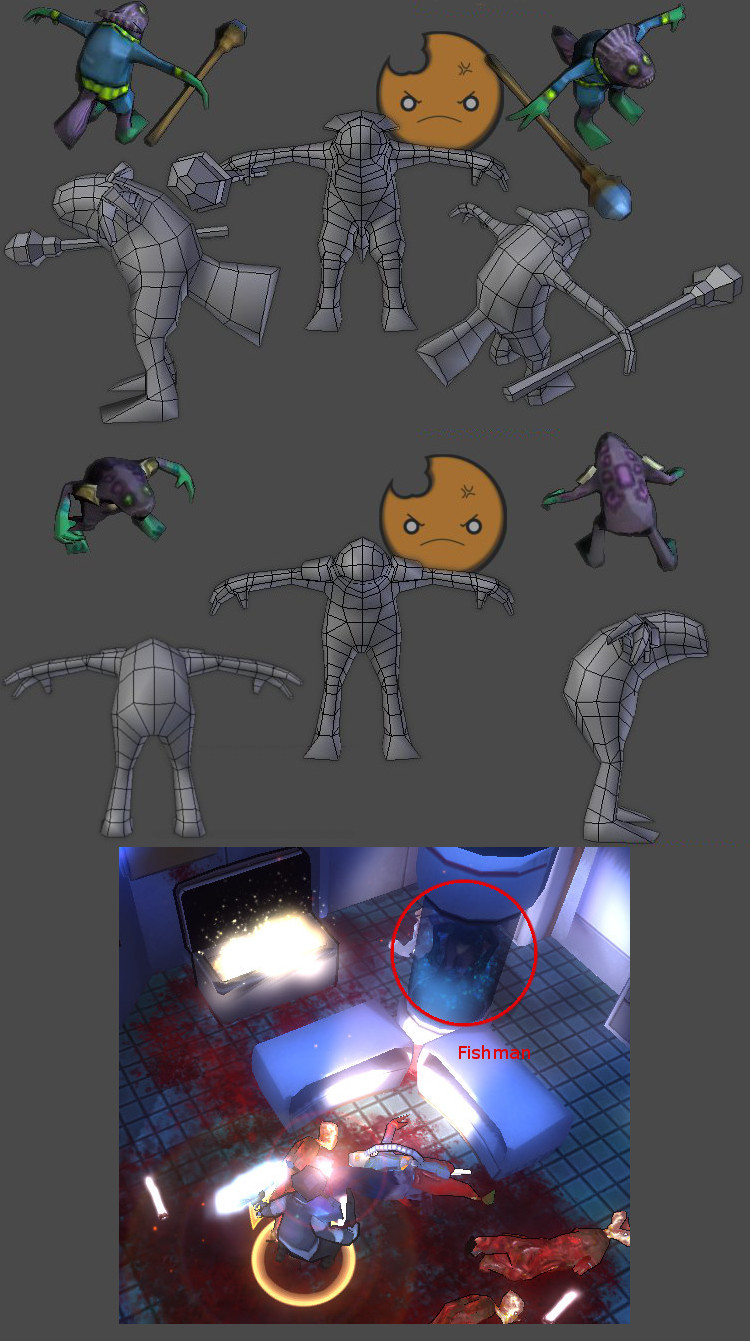 Slasher: The Slasher monster first appeared in v2, but have remained in the game ever since! Although, it's been updated with a new model for each version.

I had intended to write my plans for the future of LBKR in this article aswell, but I think I'll stop here for now, before this article turns into an entire book. I'll return with information on upcoming features and updates next week instead, this also gives me a bit more time to prepare so I don't miss any details.

Thank you for "sticking with it"! Your revisioning really helped you to learn the processes for making a fun game. It never hurts to start over because it puts a fresh take on all the mistakes you previously made.
I think Loot Burn Kill Repeat is a great one-man game! You have come a long way and really produced a fun hack-n-slash game with a lot of loot and minions. It is a fun game with replayability because each level is a bit different.

Keep up the hard work and don't give up! This is a project for you and you get to make all the decisions. We gamers, only get to enjoy your product and hard work... and, of course, thank you for supporting Linux gaming.

Thanks! :) I'll keep it up as best as I can, and thank you for your support!