The next build of Loot Burn Kill Repeat has been compiled and uploaded, come check out what's new!

It's been dead quiet from me the last two weeks, I usually try to post something here atleast once a week atleast but I've just been too short on time, sorry about that but better late than never!

I've been working on the first update in a series of smaller patches I've planned for LBKR and managed to include quite some stuff in this first one. I had actually planned to wait until next weekend until it was released so I could give myself time to fully test everything but I stumbled upon a rather nasty bug with the shop keeper code though that made it difficult to sell unwanted items in ones inventory, so I felt the need to release this patch as is. I've not encountered very many bugs with this release but some game balancing could feel odd as I've tweaked all of the player abilities quite alot.

As usual you can download the latest release either from here on IndieDB or by checking out the LBKR website. I've also created a GameJolt page for LBKR this week so if you have the GameJolt client application you can get it from there aswell!

(If you do have a GameJolt account, feel free to visit LBKR and support it! :) )

As you may notice I've gotten rid of the 4. number from the version number, this is mainly since it was a remain from the early development of LBKR, with 4 beeing the fourth time I completely scrapped the project and either started from scratch or made a massive change to the story, gameflow or gameplay elements of the game. It may be slightly confusing and I apologize for that, it's just bad planning from my part-- it should've been done by the first public release of LBKR.

So, on to the stuff that actually matters:

As mentioned, I've set up a page for LBKR on GameJolt, along with this I've integrated my own Achievments and Statistics tracking system with their Game API. What this means is that your achievment progress and monster kill highscore will be uploaded to the GameJolt website. This require you to create a GameJolt user if you don't have one already though.

If you decide not to log on to GameJolt the achievments and statistics tracking will work as in previous version and store the data on your own computer for noone else to see.
Unfortunately due to this integration I had to make some changes that will break your progression on some achievments, but most of them will remain!

Keys - In earlier versions the keys/trophy items were all hard-coded and very simple, and most of the keys didn't give any proper hint of what to do with them. Now all keys can be identified by visiting the Archeologist in Secure Command. After identifying a key item, the item will either change into another special item, or be provided with a tooltip that better describes how to use it.

Consumable - There are some new consumable types added, to start off with the most basic ones we have:

Tome of Skills - a consumable that will provide you with an extra skill point to spend on your characters attributes.
Tome of Ability - works pretty much the same as Tome of Skills but can only be applied to your Abilities in order to increase their Tiers.
Plasma Cartridge - The cartridge is used to manually restore your Weapon Plasma Fuel. This item can only be attained by completing some missions or by crafting them yourself.
Blueprint - A template of a unique item, the templates can be brought to the Engineer in Secure Command. As the engineer has received the blueprint he will help you to craft the target item if you have enough materials for it

This leads us straight into the new Item Crafting mechanic:
The idea is rather simple, I wanted for the player to have more use of the materials gathered throughout the game so creating item templates that can be crafted from the materials seemed inviting.

There are a few blueprints that you receive as mission rewards, your old characters will receive these items automaticly if the game detects that the character has already completed said missions during the database validation that occurs in the background each time the game is launched for the first time after a new update has been installed/started.

Item/Inventory buttons - When using an ability or consumable item, all items of the same type that should be affected will now display the cooldown circle to identify the item as temporarily non-interactable. I've also changed the cooldown circle's color to make it easier to notice it. 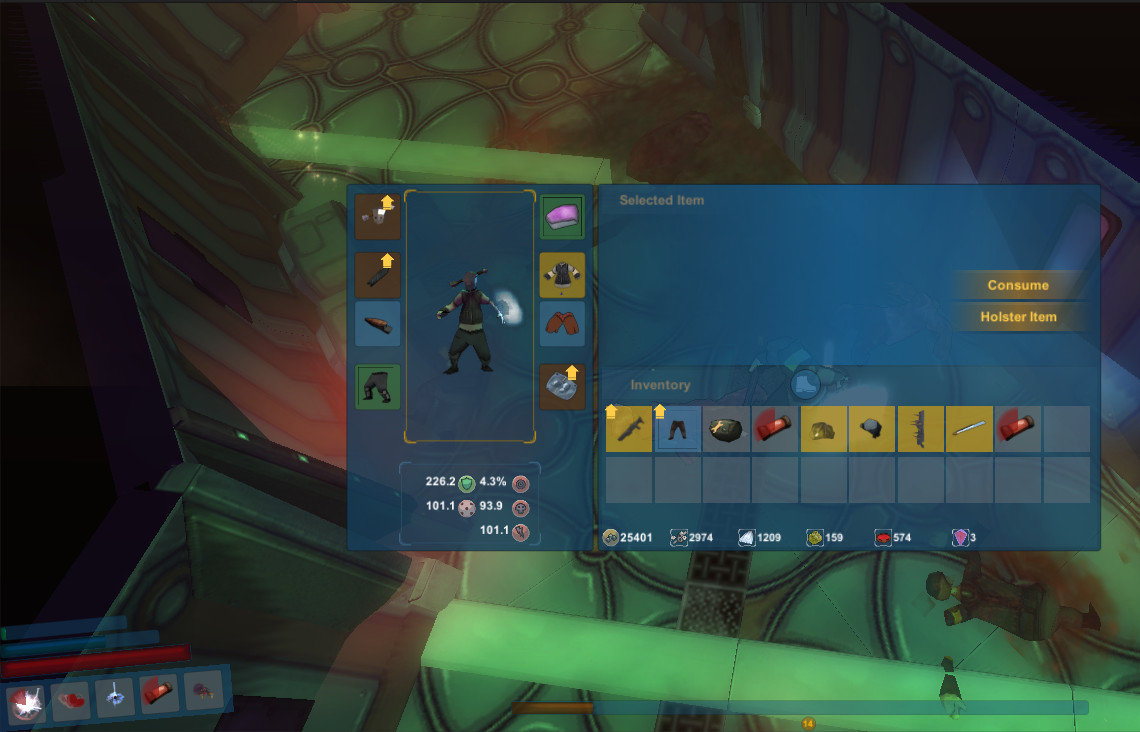 Character Profile - Some slight re-arrangements of the window layout has been made aswell as re-categorizing the contents. Furthermore I added question mark buttons to most of the stats-fields, by clicking the button a description of the statistic will appear. 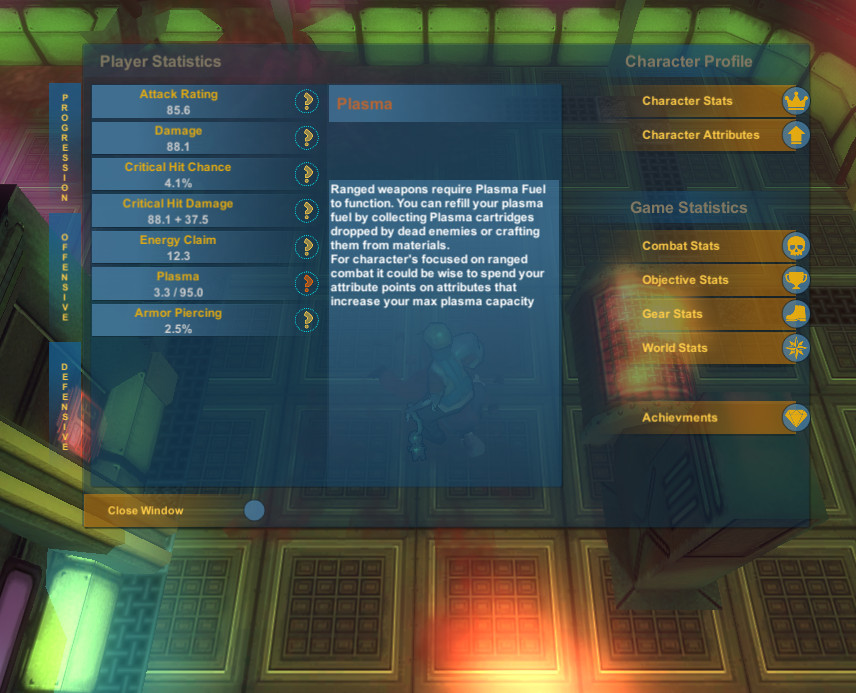 Travel Station UI - I've resized the window so it now takes up the entire screen for easier navigation. As with the Profile window, this one aswell has been rearranged.
Dotted lines were added to show from which destination you can access another, green lines indicate that the accessed is a normal destination/chapter while red lines indicate sub-chapters.
There's now also a preview image of the destination on the far right of the window to allow the user to easier identify the selected destination, and the "World Info" panel to the lower right now show the recommended player level for entering the selected destination.

A new Dialogue Database has been created, allowing the NPC's to not say the same thing over and over again all the time. This database will be improved further in coming updates for even more variation to the dialogues.

Added new troubleshooting CMD's, /VALIDATEMISSIONDATABASE and /VALIDATEACHIEVMENTDATABASE the commands can be written in the console (hotkey: Insert) to repair the databases if they for some reason appear to be broken. 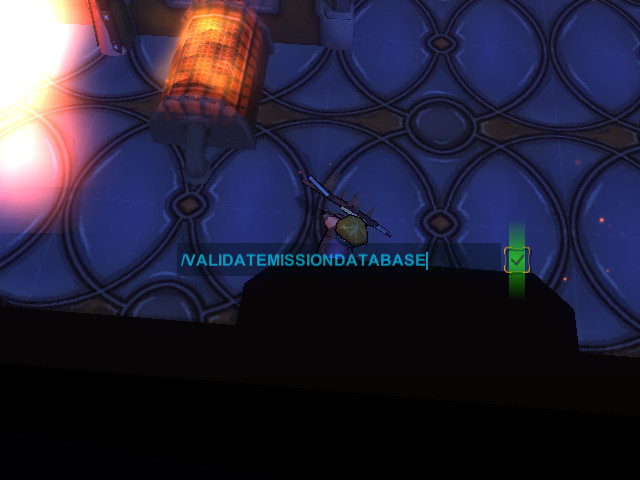 For a full list of console commands, check out LBKR website's Game Guide>Troubleshooting
You can read the full Update Log by clicking here (pdf format)

Awesome update! Great to see crafting included in your development. It will be a nice feature to craft ammo, health, armor and even weapons.
Keep up the hard work!
Thanks for supporting Linux too

Thanks!
I'll make sure to add more crafting blueprints and items as soon as possible!