What use would a good game engine be without a good front-end? Not that funny to use for common gamers. This update sheds some first light on the front-end part.

Most work went this time into the GUI launcher for the games. This included especially a long overdue redesign of the compilation process on Windows. Due to a bug in windows (infamous 32k command limit on CreateProcess) compilation using SCons and MinGW resulted in problems. Various hacks and improvements on the build scripts allow now the entire game engine, the IGDE and the launchers to build also properly on Windows 32bit and 64bit (Linux 32bit and 64bit always worked).

So what does the GUI launcher provide? Another Desura or Steam? Not exactly. The GUI launcher provides a one-spot solution to install, run and tune games build for this engine. This is the main difference between the Drag[en]gine GUI Launcher and Desura or Steam. It is designed to handle games build on this engine and nothing else. This is required since applications like Desura do not want to deal with the complexity involved handling this game engine. This is where the Launcher comes into play.

Currently the launcher supports running games as well as some basic fine tuning support. Games are not required to be installed using the Launcher as long as they install their Game File into the proper directory. This directory is global for all launchers. Using this principle you can use whatever launcher you want for your Drag[en]gine based games. Once installed the games can be run from the launcher like you know it from applications like Desura or Steam so just double click and get going.

The interesting part though is the fine tuning part. The common player does not worry about those and can just run the games on his machine. For power gamers though the tuning system allows to get the most out of your games if you are willing to turn some skrews. For this the launcher supports Game Profiles. Game profiles can be created globally for all games as well as individually for each game. You can define which profile a game uses by default so once you got a nice tuning starting a game uses this profile. You can though run a game any time by selecting explicitely a different profile. This can be useful for testing while creating a game or using alternate profiles like a „no sound" profile or a „window mode" profile or maybe a „capture video" profile and so forth. The most important choice you can make for each profile is which Engine Modules you want to use for running a game. A simple example would be to have one profile with OpenAL as sound module while another use NullAudio. Obviously the later one would provide a silent game which can be useful for certain games or if your boss is not supposed to know you are gaming instead of working :D . Furthermore every module in the engine provides a list of Module Properties. For each profile you can define which property values to set. All property values you do not set in a profile use the default values. In the screenshot below two sample screens are included giving an idea on how this looks like. Using this system you can tune your games the way you see fit. For the lazy ones the launcher provides a default profile which includes the best matching modules for your machine. Specifying no profile uses this default profile.

The entire engine as well as running games is handled in separate processes so no matter if the game fails for some reason (either due to scripting errors while modding or due to a crash in an experimental engine module) the launcher stays alive all time. You can also kill a running game if you managed to get it stuck for some reason. Something which is useful that other game frontends often lack. Each game can be run only once. Support for running more than one instance of a game in parallel can be added later on if this is desires. For most games though more than one instance does not make much sense.

The GUI Launcher is not finished and requires more work. Installing games as well as uninstalling games is not yet implemented. Also the module rating and optimal profile generation is not yet implemented. This requires some additional engine stuff to work first. Updating is also not yet included. This will later on be included when the engine turned into a releasable state. Last but not least the GUI is currently made to be functional but not yet esthetic. A nice look will be added later on. Important at the time being is the functionality.

One of the larger construction sides remaining had been the logging part. So far everything from the engine over modules to launchers used printf for logging and that's ugly to work with in the long run. The other half of the work this time went into building a proper logging system which is not only simple to use but also versatile and efficient to use. For this a bunch of logger classes have been created. These are organized in a hierarchy so you can use any combination of color-console logging, file logging and custom logging depending on your needs. For games running through the launcher log files will be written using a file logger to a separate log file for each game. All other log messages are written using a file and a GUI logger. This way the important logging informations about the launcher can be viewn in a separate window. Overall logging is now proper and works similar on all supported platforms. 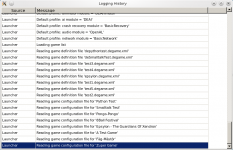 This may sound now not like news worthy but it actually good news for Windows 7 users. Windows 7 has rather restrictive ideas about which files are allowed to be stored where getting in the way with a complex engine system as the Drag[en]gine is using. The IGDE and the Launcher have now been modified to conform also with the restrictive file hierarchy requirements of Windows 7.

With this work out of the way the next steps can be taken care of including Environment Mapping which works already but more about that later.

This launcher will be very useful, I like the idea of the profiles.

Without the profiles it can look pretty confusing.

This is only the properties part for tuning the games. The main GUI looks like most other launchers with a list of games you have installed. You get in touch with this only if you wish to get the most out of your games. I have to say also though that the look of these dialogs mentioned in the news post already change a bit. They contain additional icons for validity/invalidity and are a bit better arranged so it is easier now to use. More to come.