Underwater Adventure Awaits! An early version of the new infinite underworld feature. Players can now visit the old world in real-time. Hunt and Loot the sunken ruins of a lost civilization.

An early version of the new infinite underworld feature. Players can now visit the old world in real-time. Hunt and Loot the sunken ruins of a lost civilization. 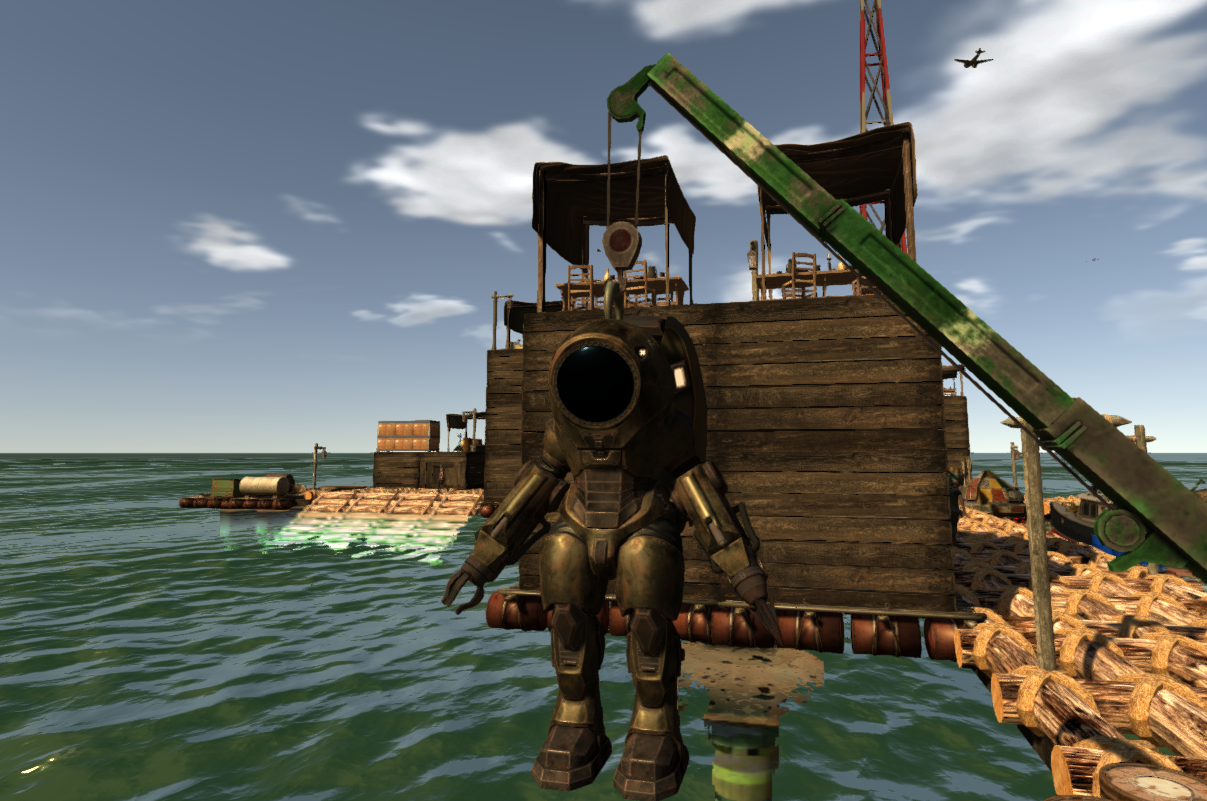 Players have 2 ways of diving to the bottom.

The first way is intended for new players, as there will be an A.D.S. hanging where the Diving bell use to be. Use it and it will take you to the bottom. Use the backpack on the bottom to go back to the surface.

The second way is by hacking the blueprint found in the smart category of mechanical. Once hacked you can craft it and hang on your crane anywhere in the world!

Everything below is procedurally generated and at random but balanced scale. Players will be able to explore multi-level buildings and shipwrecks.

Player is equipped with 2 weapons while in the suit.

Left-Click allows the player to turn on their fusion drills which are needed to break apart cars for scrap.

Right-Click allows the player to shoot their explosive tipped harpoons.

Holding down space will allow the player to use his/her ski thrusters to maneuver better.

Be careful down there, something large lurks in the background...

There are so many features we could add, but it’s better we roll out the basics and see how the community would like to see it should be built up. Expect lots of balances and immersion tweaks throughout the development process.

Currently the “Armor” stat is disabled for further testing, so the suit relies on your health, which means the basic rules to player health and eating etc applies.

How to Get Back Up:

What to expect in the future:

We will continually add new content and improvements in the incremental patches as we work towards the next update. We wanted to introduce a basic framework, so that we can inspire the community of many possibilities. We’ll be posting more previews soon to let you guys know our next plan of action!

While the world is infinite, there is currently a restrictor on the player while below. They will only be able to venture out 250 yds from the drop point. This is to ensure stability as we continue to do more testing. Having multiple worlds in one world will start adding up on the code and we want to make sure we get it done right. We have to work out some more theories and test them out so that we can ensure we can deliver a really full and rich world at the fraction of the performance required compared to any other survival game.

- Loot is now working in the floating npc homes

- Item description should be displaying in the blueprints menu

- Player can flip boat back over by using the crane UI

- Drone from the intercept tower is now displaying loot

- Death scream changed to generic female one, will get a better one later

- Fixed blueprint mismatches. Let us know if you find anymore

- Ammo can now be crafted

Keep a look out for the next preview. Something to do with hunting monsters with giant mounted harpoons…

Holy c*ap ... I was dreaming about game like this . After playing Subnautica - I thought it would be really awesome if somebody made the game that follows similar survival genre pattern and mixes it with underwater salvaging , with a bit of survival horror .

This game was completely off my radar - tracking it now .

Also , one question to the creator - have you maybe got an inspiration for this idea from the movie Waterworld ? ;)