New concept artwork, news article links and a question... what would you nickname the aliens?

The Kickstarter is going well so far. We've now reached the £1K mark! There's still a way to go but the response has been great so far. Thanks to all those who have pledged and shared the project.

I've managed to sneak in a bit of alien concept art time in amongst the busy schedule of running a Kickstarter. This is one that I've been wanting to design for a while now. It's a rather big brute who has a rather devastating secondary attack capable of destroying both sets of cover during a fight. Scary! 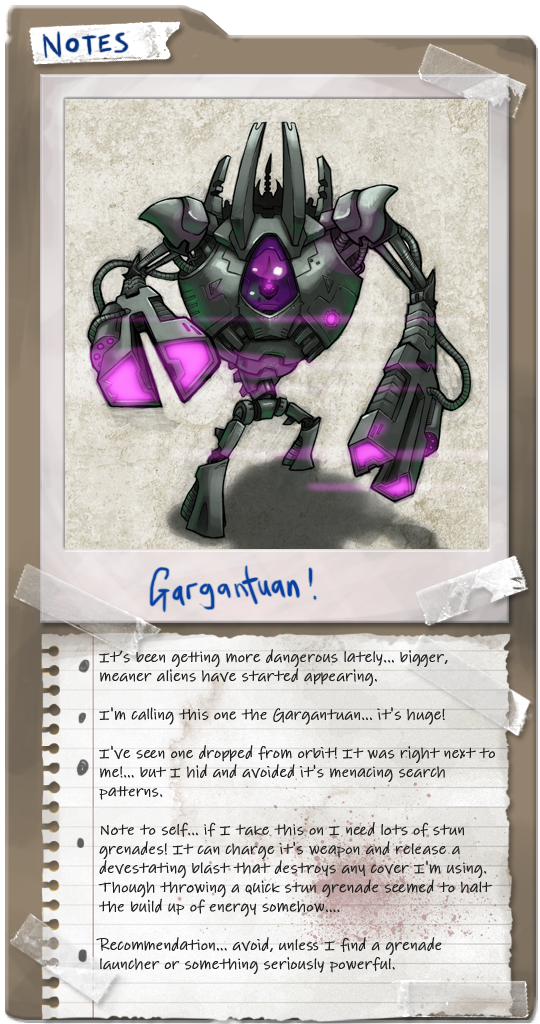 As the threat level of the world increases, the scale, amount and sheer power of the aliens will increase with it. As that happens Will needs bigger weapons or a way to reduce the threat... maybe he needs to sabotage their way of calling backup?

The project has had some more press recently which is fantastic. I've been mailing as many sites as possible trying to get coverage. Here are the articles that went up recently.

This line made me smile :)
"Oh my, this is the Milo game that Molyneux wanted to make! Well, almost. At least it has aliens." - Chris Priestman (IndieStatik)

The last one is in Dutch, so a translation may be required for some :)
Gamestalker.nl

If you know of any other sites that would be interested be sure to comment or send me a message.

The aliens don't have a name, they've never spoke to a human before so we don't know what to call them. They just turned up and kick-started the apocalypse. What would you nickname them?