Just a brief heads up on the new patch due to be out in a few days.

I am pleased to report that KA2 Empire At War is largely bug free. The only ones i've found on a recent playthrough are merely graphical and description errors; nothing gamebreaking.

I have however taken the opportunity to revamp the Romulan Capital ships. It's a principle I've taken from tabletop gaming; you always make the powerful models the most detailed and impressive as it gives people an extra incentive to acquire them.

I had to make sure that the classic ships (Oberth, Constitution Refit, Miranda, Excelsior, B'rel, K'T'Inga etc) were properly modelled as they are the archetypes. Everything else sort of fits around them. I was fortunate to find some nice models for the Federation, so even the humble Okinawa and Akula Refit have detailed models. The Klingon Empire wasn't so lucky, as besides revamping the F15 QuD Class, redone models of the KA ships are difficult to find. As mentioned though, I did manage to redo the capital ships which is in my mind the most important for the above reason. (Still looking for a nice Qa'hoS if anyone knows one, will bridge the gap from the QuD to the K'T'Inga)

Now, the Romulans in KA2 are a bit of an enigma to most players. Whilst being a major race in the series, they don't really have a ship from this era that is their well-known classic. The Bird of Prey (from Balance of Terror) is too old, and of course any class of Warbird (besides one..) is too modern. They do have the Stormbird, basically a Romulan K'T'Inga, which harkens back to their use of D6s/D7s in the Original Series. That model got upgraded at the same time I redid the K'T'Inga.

I had a few potential upgrade models for KA2 stored away on my F Drive, and decided to review them recently. What you see here are the fruits of my labours (and others naturally, credit where credit is due)

The first is the smallest ship built at the Praetorial Shipyard; the Senator Class Command Cruiser (RCC). This new model is a bit of a mystery. The readme claims it's by Activision and retextured and tweaked by someone called "Cpt. LC Amaral" but do not recall an Activision released Star Trek game with anything like this model. KA had it, but the KA model isn't this detailed and it was released by Interplay. Anyway, she's a beauty and faithful to the original design to the smallest detail. I converted the model for the A2 Storm3d Engine, and I redid the lightmaps to add spotlights and such. I also lowered the poly count down to 2500. This particular ship is the RSE Mavres. 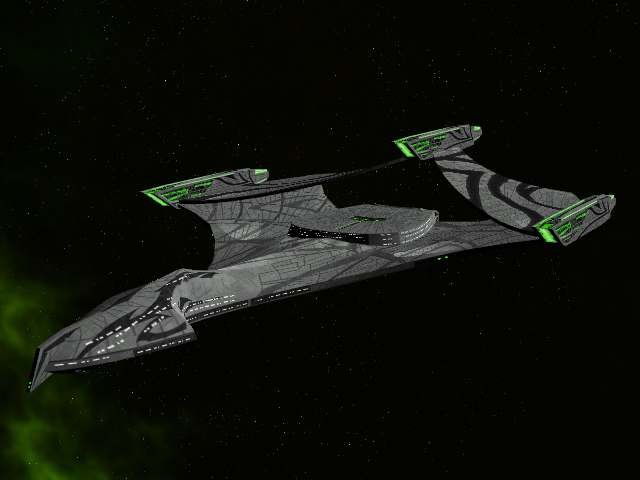 Showing off the underside and associated light map 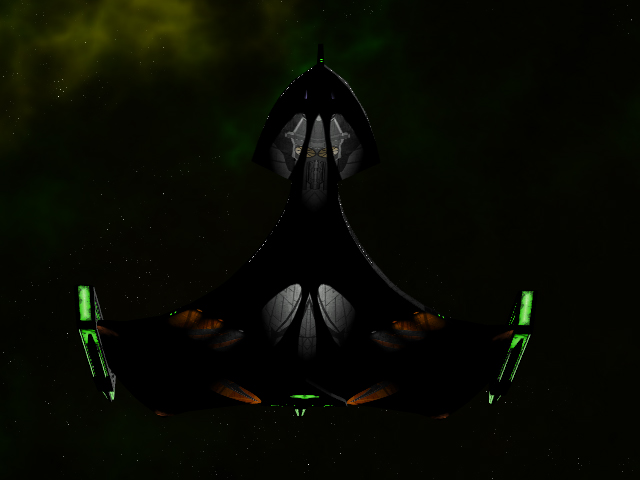 And now darkened to show the topside light map 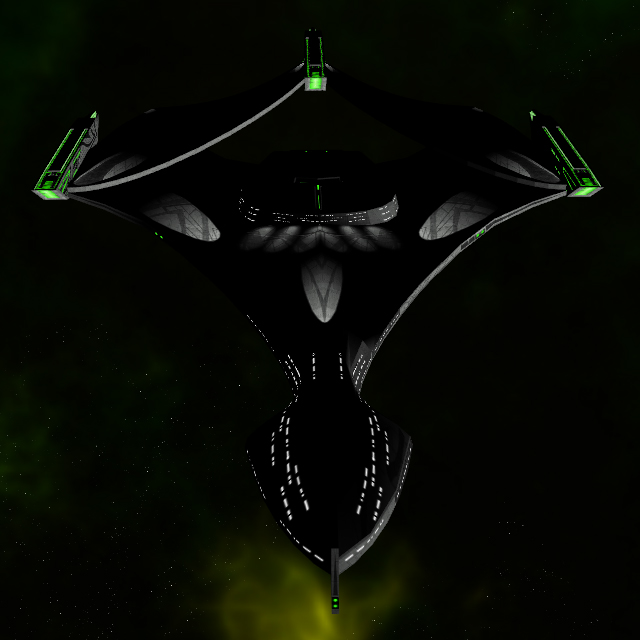 Next is the Raven Class Battlecruiser (RBKC) The original model I used was one from the E&F Mod from Armada 1 that I retextured using Stormbird textures. I originally used the same model for the Klingon C8B VoD'leH Class. I could have used the upgraded VoD'leH Class model and retextured it, but I wanted to try and create something a little different. The in-universe idea was that during his failed Ormong of 2291 when he had Romulan backing, Melkor paid for said backing by providing the Star Empire with rough schematics for the VoD'leH Class. As they were making Stormbird Class ships based on the same K'T'Inga spaceframe, and the VoD'leH was designed as a sort of "economy" design anyway, it fit Romulan needs and abilities to reproduce their own take on the design.

I kitbashed this myself from the existing Stormbird model (mesh by Moonraker), only reusing the interesting nacelle design from the original model. This Raven in particular is the RSE Terraedaere. As a point of note, the two yellow glowing "tubs" underneath the hull are Cohesive Fused Deuterium Irradiation Cannons (CFDIC). 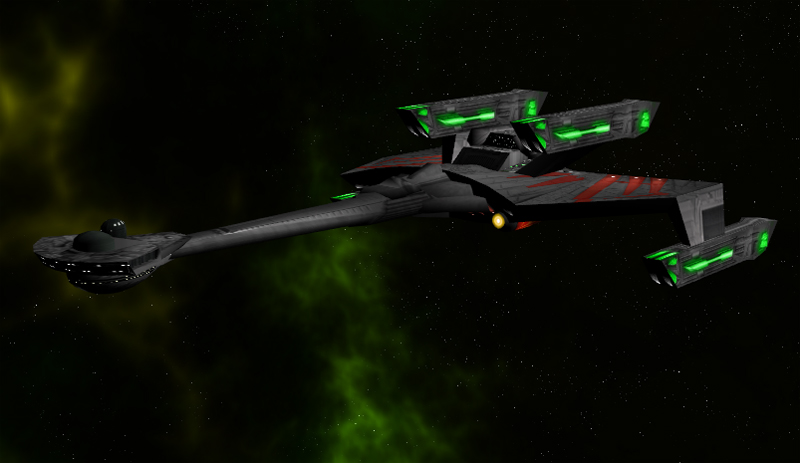 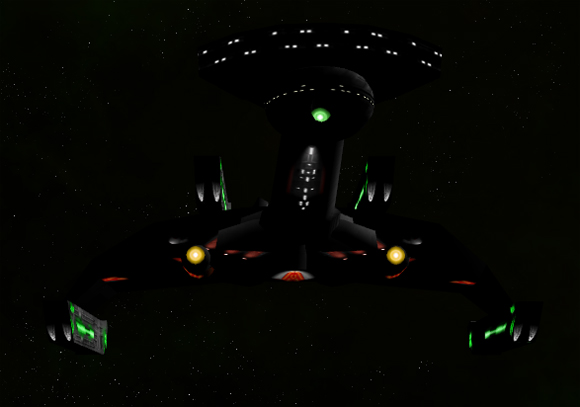 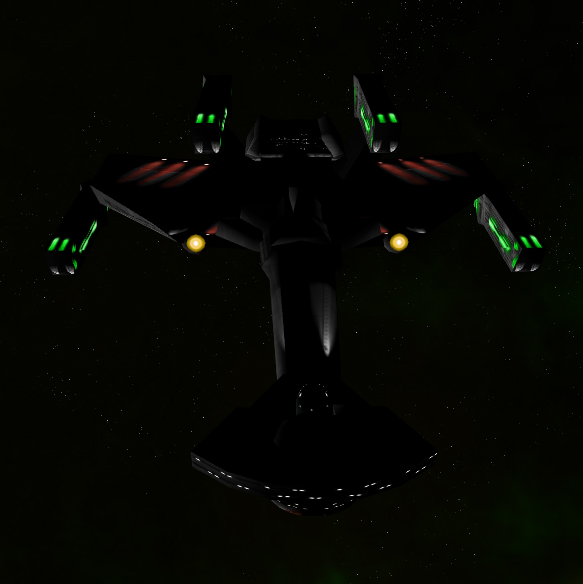 Third is another Battlecruiser, this time the indigenous Imperium Class. (RBCH) For those not aware, during the period KA2 is set, the Star Empire had three indigenous design series due to economic austerity. Unable to complete replace old designs, they used ;

The Imperium is from the Ornith Series (Late Subseries). This model was originally in a style I really, frankly, dislike. Obviously inspired by the X-Ships in SFCII Orion Pirates, she had green wings that looked like solar panels, and was painted in overall slate grey. I put her back into her proper trim: all over white with stylised "flame" feathers. The original modeller is Captain KoraH with elements from Thu11s Firehawk Class. Redid the lightmaps also. The ship pictured is the RSE Heranivs. I am not sure why one wingtip insists on shading so heavily, I've redone all the smoothing groups. Just a peculiarity of that particular shape I guess. 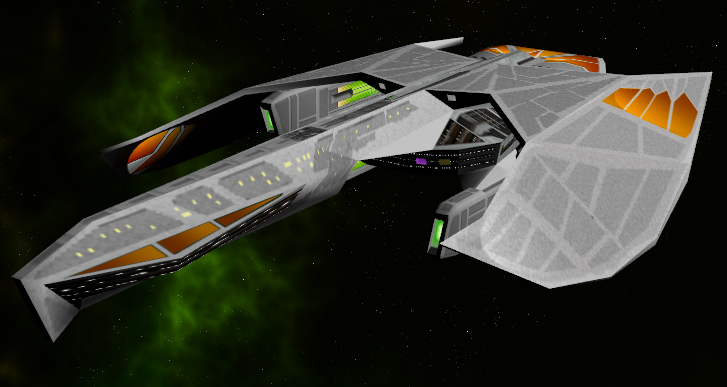 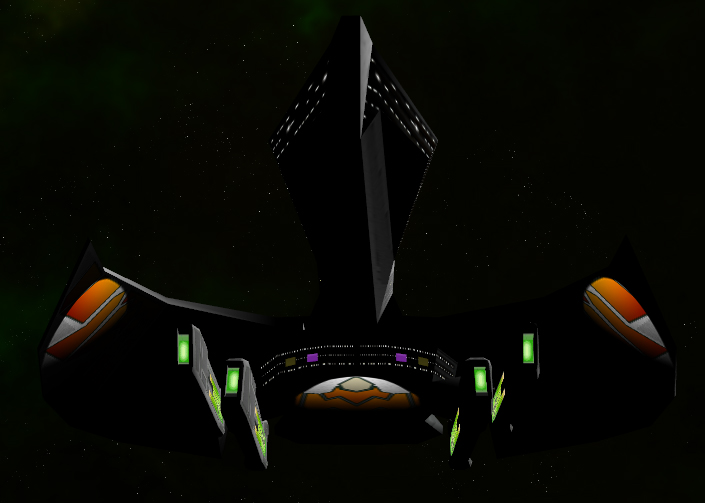 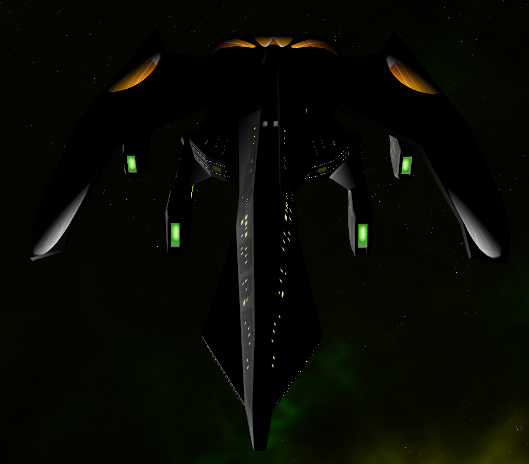 Next up is the Condor Class Dreadnought (RDKN). This is the only one that required an ODF change to fit the new model (having two forward Plasma-H Tubes rather than one). The original model is the same model as the C9A pumwl' Class (mesh and textures originally by WickedZombie45). The new Romulan textures were made by a modder named Rod O'Neal. They are not quite of a style I usually use for my Romulans, but they work. I added my own modified lightmaps from the pumwl' and made a few modifications to the textures here and there (and changed out the red torps for proper green Plasma-Hs). The ship seen here is the RSE Eagle. 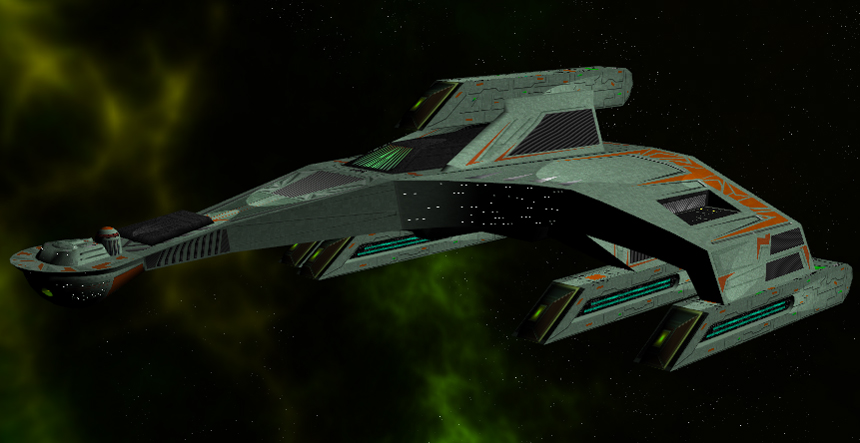 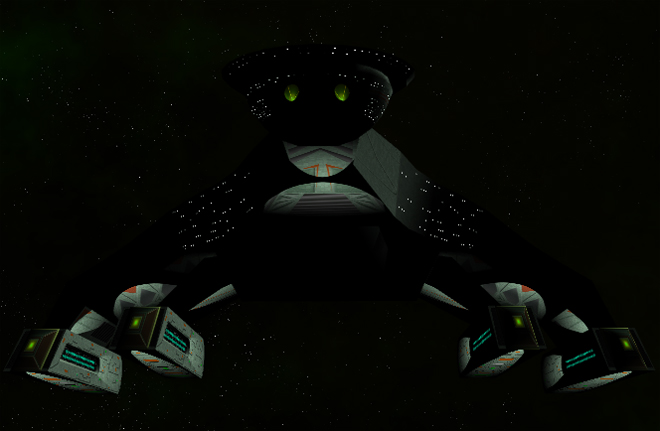 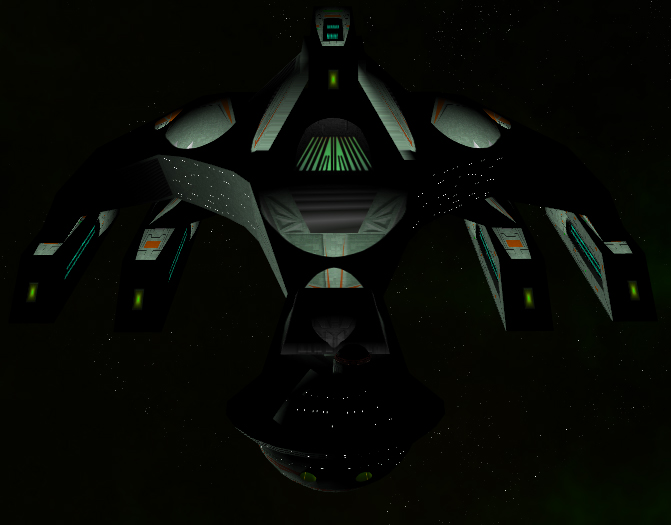 Next is another dreadnought, this time an indigenous Romulan one.

She is the War Eagle Class Dreadnought (RDN), part of the Ornith Series. This model is probably the biggest departure from the classic SFC model. It's style is almost totally different, but I think that it clearly pays homage to that design and it also fits somewhat better with it's intended ancestry as the very first of the "Warbirds". Yep, this is the grandfather of the D'Dereidex. (Father to the Melak). The base model and textures are by Moogle, with some editing for SFC by the aforementioned Rod O'Neal. I have edited the model significantly (in a technical way), remapping parts, reducing the number of textures etc. I also repainted the "glowy yellow" parts of the original to a more fitting green colour, and painted the overall ship from a white-grey to a pale green like the original War Eagle. Obviously, also redid lightmaps in my own style :D . This ship is the RSE Pax Remvs. (remembering that there is no U in latin...)

Not sure why those black boxes appear on the leading wing edges. I'll have to investigate the smoothing groups.

Finally comes the real monster of the Romulan Star Navy, the Imperial Hawk Class Battleship (RBB). Originally this model was again in a style I wasn't keen on, a sort of "Lost Era" brown and green. I redid her in her original blue-grey and steel colours. It's possible that the original creator was going for a Lost Era refit scheme. Anyway, also redid the lightmaps and remapped the bottom of the central pod, since the original had awful texture stretching. The "tail feather" pattern on the stern also needed some attention. Also, you can't see them in the screenshots but I redid the engine textures as the originals were rather poor. Original modeller is somewhat unknown. The readme lists them as Taldren, but it is a far more detailed model than ever appeared in SFC. The textures were originally by the famous Pneumonic81 and Atrahasis. The ship pictured is the RSE Imperivm Trivmphvs. 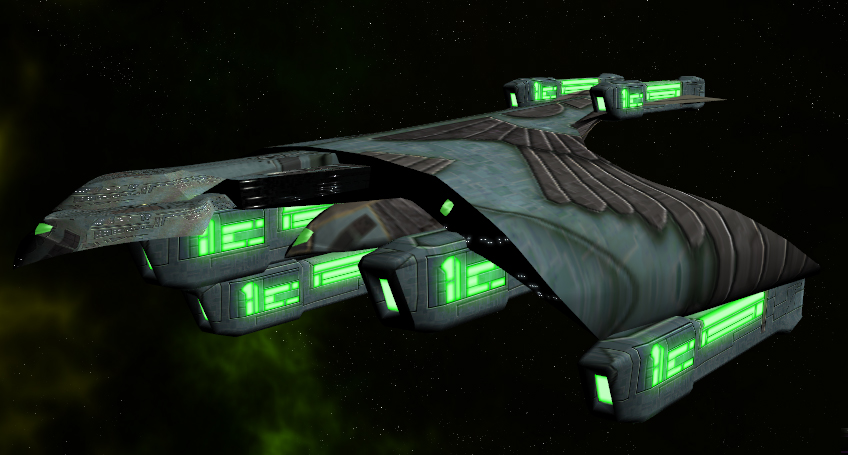 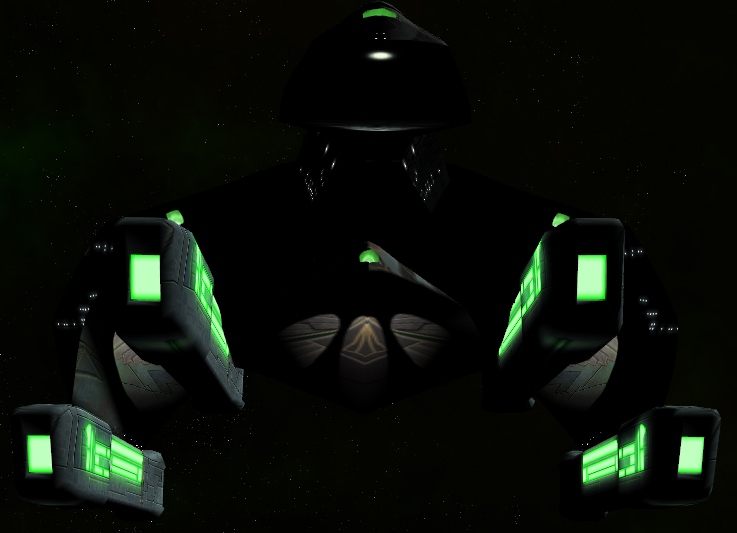 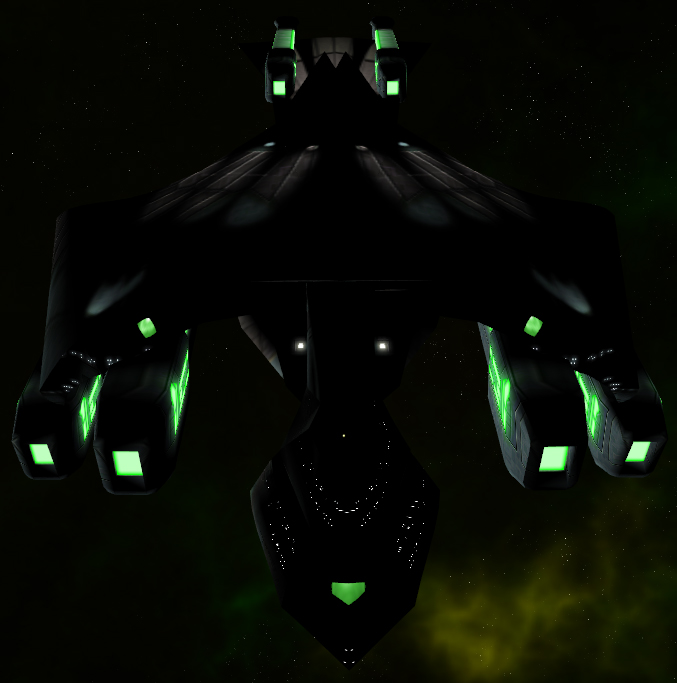 and here they are together, to scale. Notice the weird wing tip thing I mentioned on the Imperium. Upon examination of the model, the wings are not properly symmetrical. I might need to rebuild part of the model. We'll see. 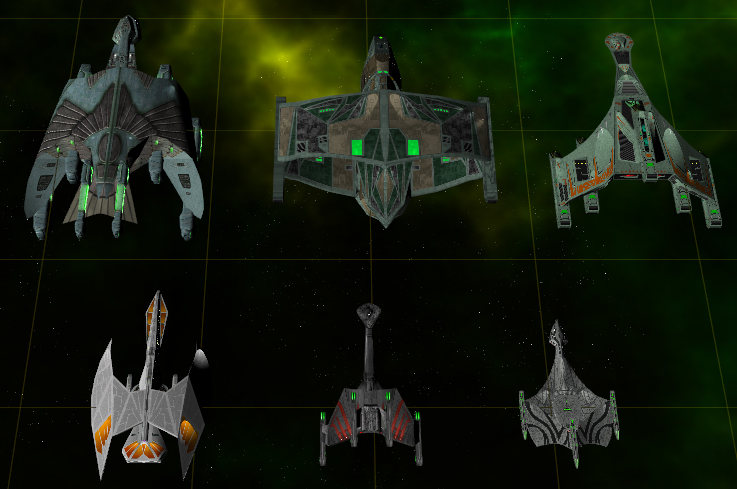 The War Eagle looks just awesome, really catches the looks of the Warbirds. Great job on them!

Glad you approve :) It was the only one I was really worried about using, as it is such a radical departure from the original design. I don't want to lose the mods Klingon Academy roots, but lets face it, even if I had the original KA models (that were quite well detailed for the time), they are almost 13 years old by now! They badly needed a refit for this decade!