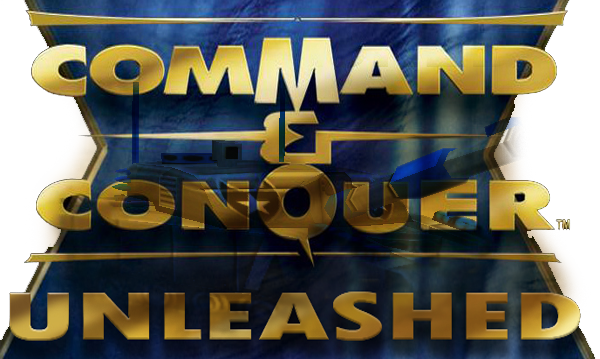 Merry Christmas from the ZHU Team!

'Twas the night before Christmas, and the good people of the ZHU team truly did work their asses off to bring you a Christmas Update like no other, a Christmas Mega Update in fact. So, let's cut the crap and get rolling, shall we? 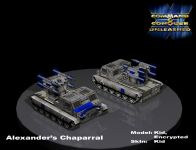 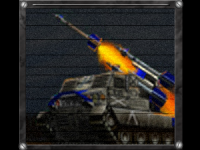 First off, the new MIM-48 Chaparral for General Alexander. (I swear we've been planning this unit for months.) A relatively old vehicle, the Chaparral was modernised and re-activated to allow for easy manufacturing without significant cost increase, as the factories didn't need much retooling. The Chaparral now provides the Marine Corps with a mobile anti-air support platform, carrying four AIM-9K Sidewinder missiles. It may not be the fastest vehicle in the Marine Corps arsenal, and it has little armour protection, but nonetheless it is good at what it does. Its missiles are equipped with advanced tracking systems allowing target acquisition from a longer range than most other anti-air systems, shielding a wide area around the Chaparral from air attack. However, the system is so sensitive that the missiles can only get a target lock when the vehicle is stationary, and as such the Chaparral is much better at area-denial or forward position defence than mobile convoy escort - though it can perform that role as well, provided it stops when it needs to open fire. The few enemy pilots who have survived a counterattack by a Chaparral speak of it with fear and dread. 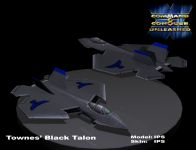 One of Townes' many pet projects, codenamed Papa Whiskey November Echo Delta, went about three years and sixty-five billion dollars overbudget, to culminate in the Black Talon stealth fighter-bomber. The epitome of the stealth attacker concept, the Black Talon (so secret that it hasn't even got an F- designation - some pilots and ground crew jokingly refer to it as the F-19) is actually specialised in taking out anti-air vehicles. It is effective against most ground targets, but the whole picture means that it's best used to take out anti-air in a convoy - referred to as "sniping" by the pilots - to pave the way for other, more powerful ground attack aircraft. To add to its role of anti-anti-air fighter, the Black Talon is equipped with a secondary short-range air-to-air laser. This weapon is somewhat comparable to the Vulcan cannons on most fighters, however it is more powerful - and cannot fire as far. This allows it to take down aircraft sent to intercept it, clear out patrolling fighters, or even go 'copter-hunting. Its main downside is its high cost. 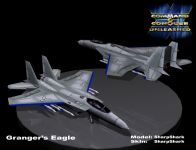 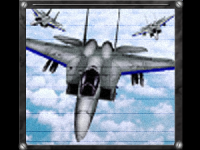 Retired ahead of schedule, slated to be sold, and subsequently re-activated when the Chinese and the GLA began using more aircraft, the F-15 Eagle is an older fighter that still performs rather well. While it may not be able to outrun modern fighter jets, its engines have been upgraded, allowing engineers to slap on thicker composite armour, making it quite tough for a jet fighter. Modern avionics and sensors equipment complete the upgrade package. Combined, all this makes it very good at its intended purpose - a straight-up air superiority fighter. The Eagle is one of the most single-minded units in the entire USA arsenal, being specialised to a fault: ALL hardpoints - EVEN the one occupied by the drop-tank before their retirement - are now carrying AIM-120G AMRAAM air-to-air missiles, a total of eleven per plane. (Note: The missiles are launched at 400msec intervals, so no Macross Missile Massacre on a simple Chinook.) This makes it ideal for protecting an area against bombers and helicopters, disrupting enemy aerial supply lines, raiding poorly defended USA Supply Depots, or convoy escort. Its large missile load allows it to engage multiple targets in one sortie, while its armour ensures that it can stay in the air even after being shot at a few times. However, all this comes at a price: Granger players must first invest a genpoint to unlock the Eagle and Strike Eagle (not shown) before they can deploy them to the battlefield. Ergo, this is NOT Granger's basic jet. 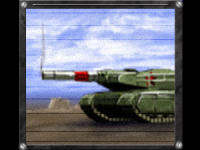 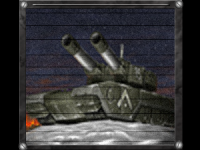 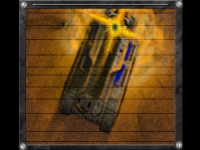 Three cameos for units revealed in earlier updates: the Black Panther, the Eisenhower and the Negotiator. 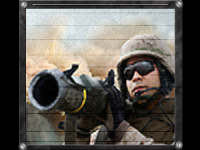 The AT4 anti-tank missile launcher was used as a standard infantry anti-tank weapon in the early wars of the 21st Century, but in 2014 its use got superseded by a modified Stinger missile launcher, capable of firing on both ground and air targets using an advanced guidance system to track fast-moving units, which is why the AT4, which was lighter and more easily handled than the Stinger-MR, saw barely any use in the GLA wars of 2017 and 2019 (e.g., vGens and ZH, respectively). After advances in technology allowed a quicker target lock using a smaller system, the AT4 was modified to track its targets just like the Stinger-MR, resulting in a total phase-out of the weapon (all stocks of which were reportedly sold to the GLA via CIA channels). Nowadays, Missile Defenders use the smaller, lighter AT4 instead of the bulkier Stinger-MR, which produces roughly the same results but is a lot easier for the soldiers themselves. 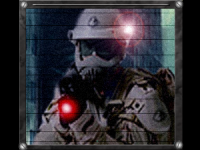 General Townes is something of an outcast in the US Army, not just because he never goes out to have a beer with the other generals (instead preferring to play D&D in the basement of his house), but also because he's on a veritable crusade to eliminate chemical propellant projectile weaponry from the military altogether - and if there's one thing Army generals like more than beer, it's guns. This has even led to the banning of ALL small-arms from his infantry. Instead, he equips his basic infantry, the Laser Troopers, with a continuous-fire solid-state laser rifle. This weapon allows his soldiers to engage enemy troops from a slightly longer range than their bullet-based weaponry would allow, giving the Laser Troopers the first-shot advantage. In sufficient numbers, they even pose a threat to light vehicles. Also eliminated are old-fashioned grenades; they're "dirty, nasty, dangerous weapons, unsuited for combat in the modern world - or in any world at all, when you think about it", in Townes' own words. Instead, to clear out buildings, they use modified door-breaching rifle-launched missiles developed for standard assault rifles in the early 21st Century, but which haven't seen much action in favour of flashbangs and frag grenades. The "Simon-II" requires a specially modified mounting on the "muzzle" of the laser rifle, which has to be requisitioned first, but when soldiers' rifles have been equipped with the mounting, they can all fire these missiles. The laser ignites a small block of hydrogen propellant, allowing the missile to fly a good distance, while the double-stage warhead first breaks down the door and then causes a plasma explosion, which is devastating in a confined space like a building. They can even be fired through windows or other openings; their main downside is that they are not very useful out in the open. 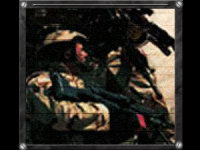 The mission of the Marine Rifle Squad is to locate, close with and destroy the enemy. However, sometimes the enemy is stupid enough to fight back. While Marines, with their armour and stamina training, can take quite a beating, even the most hardened hero will succumb to a large enough volume of rifle fire. Therefore, it is not uncommon for Marine riflemen to go out into the field accompanied by a support soldier: the SAW Gunner. Armed with an M249 Squad Automatic Weapon, the SAW Gunner is one of the most powerful soldiers in the world, capable of taking down enemy troops relatively easily, shooting from ranges slightly greater than those of most assault rifles, and filling the air with bullets. However, don't think you can just rely on these soldiers to do all the work; they are quite expensive, slower than other Marines and armed only with their machine gun - hence, they are very good in a support role, or at defending fixed or mobile positions against enemy infantry, but they are helpless when confronting large numbers of soldiers alone, or when exposed in an urban warfare situation. Their weapons may be powerful, but they cannot shoot through walls or kill twenty soldiers by itself. Also, since it is a small-arms bullet weapon, it is not very useful against vehicles, and completely useless against tanks. This is a powerful, but specialised soldier, that should be used with care and micro. 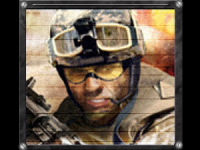 During the Second World War, the Marine Raiders were "like Marines, only more so"; an elite within the elite, tasked with special missions in enemy territory. The Raiders were disbanded, however, and integrated into the rest of the Marines. Now, the name at least has returned, in the form of the elite sniper commandos of the Marine Corps: the modern Marine Raiders are elite soldiers, hand-picked from the rest of the Corps, chosen for accuracy, stamina and bravery. These soldiers are then armed and trained with the M120 rifle, based on the old M40A3, but developed much further. Mainly, this makes the rifle easier to carry and handle, without imparting loss of accuracy. Furthermore, the muzzle has been fitted with a special jacket for firing USMC Standard Mark 4 high-explosive rifle grenades, developed specifically for the M120 rifle. This powerful grenade follows a high ballistic trajectory allowing Marine Raiders to fire over obstacles or hit the more vulnerable top armour of tanks. The grenade has a powerful, concentrated explosion, which can cause catastrophic damage within a small area around the point of impact while leaving almost no marks whatsoever further out from the blast. This makes the weapon useful even in close-quarters firefights. Moreover, the warhead has been specifically designed to cause heavy damage to any kind of armour, making it a powerful weapon with which to engage stationary tanks, buildings or bunkers. Even though it cannot actually breach the roof of a bunker or building, the shock of the explosion will reduce the structural integrity of the building, and sustained fire can actually cause the entire building to collapse. Most soldiers are smart enough to run for the nearest exit before this happens, however; at which point they will be easy targets for the Marine Raider.

We hope you enjoyed this update, and we wish you all a very merry christmas and a happy new year! Now, let's sing!

#Jingle bombs, jingle bombs
#Mine blew up you see
#Where are all the virgins
#That Bin Laden promised me?.....

(P.S. My apologies for the small image size, but if I posted the original images about half of them would have been cut off.)