I Wanna Be The Fangame Is Finally Released! Get it Now!

After one and a half years of deleopment and over 150 rooms, I Wanna Be The Fangame is finally finished. 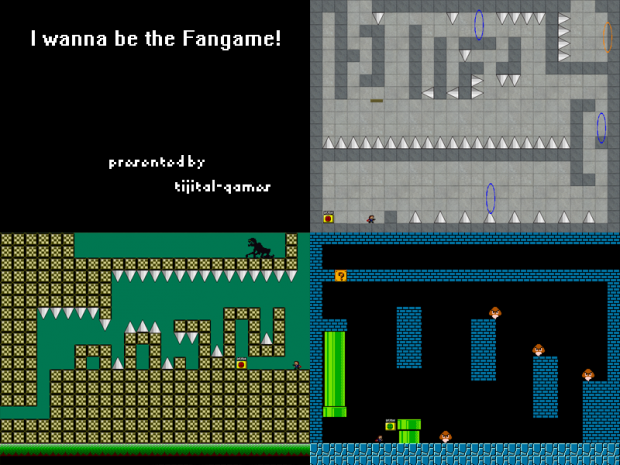 This project has become something so much bigger than anything either Tij or myself could have possibly imagined, and now that we look back on the finished thing, so much better. We've spent so much time on this that it's come to reflect our evolution as level designers, puzzle makers and game developers. We made the original Betas in roughly chronological order, and because of this, they naturally seemed better towads the end (We think so, anyway).

Now that we've spent so much time polishing, expanding and detailing this world, a lot of the best content has ended up in secret areas.

A lot of these secret areas were developed at the very end of the project. Because of the basic difficult and hidden nature of them, Tij just went crazy with insane mechanics and elaborate chase scenes. It's an odd feeling to be working so hard, and putting your best work into something that's INTENDED for people to miss, but its also very congruent with the original designs for the game.

It's not meant to be easy! And because of that, it's all the more rewarding when you do beat something, and it lets us make things that are all the more hilarious when you realize you should have expected it. The way we've left a lot of the most interesting stuff in the game in the secret areas rewards those people that do spend the time to go hunting for them.
So that should give you good reason to go looking too! Sure, the secret areas can be a lot harder than others, but you'll probobally find they're the most rewarding to finish. 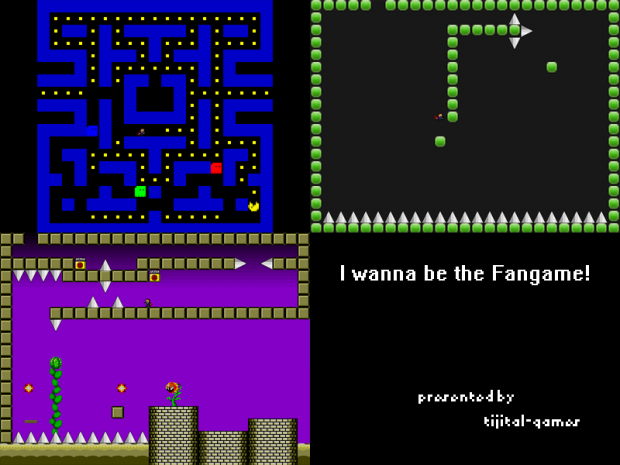 Anyway, you probobaly didn't read all that, so I'll get right down to it. The game's (Finally) finished, so you can grab it off ModDb below.


Thanks for playing, We look foward to the ragers on youtube sometime soon,

I hope you can save your game now! :P

i think that's not possible..

you have the shoot the save point to save

Awesome, ive clocked one of the early versions, is there much difference?

yep. Bug fixes every where, fixed up and modified and made better a lot of the current areas, and there's also one entirely new path at the end, imbetween the last two bosses

bugfixes? I thought the glitches were half the fun!

This looks amazing. Downloading it now and tracking the game for any future updates.

Downloaded, got to the fourth "room" and almost rage quit, I probably just need to be more awake (its 1:00am 0.0) but so far interesting, I just need to make sure not to kill my shift key, and avoid resting my finger on R. Just gotta hope no one starts flaming about how hard this is :)

Yes! Gonna torture my self like with the first one! Thanks!

I'm afraid of playing this after what I've seen and heard from this moddb page. I might accidentally destroy the keyboard.

it's not unheard of. Hopefully you are sensible enough to take breaks every now and then before that happens.

Got as far as the third room so far and I'm about to throw my keyboard out the window! This is one mutha fackin tough lil' game lol!

Need something to change the controls (you really need to but a readme.txt in there to explane them)
I have a european keyboard, so Z and Y switched places which makes it hard to shoot and jump.

There is a controls.txt wich sets the controls, but I have no idea which number which key is.
Would it be that hard to implement?

Also when I hit ESC my screen becomes black and my PC freezes. Is this the fullscreen button?

I'm coming up with a good interface for changing your controls, the old one was just terrible but it's inside the same zip folder as beta v3.

I've started playing, but game is too laggy for a reason. Do anyone else experince this?

How do I saved game

you have to shoot the save points

I cannot get past the Pac-Man level...it's just not possible =/

Okay, i got past it but now I'm stuck on the Pokemon level, I can't get out of the ball!!

OMFG! This game is just so unnessarily hard that I just HAVE to beat it. I'm stuck on the green worm game (as in the pic above). I can't help but get killed by the plane, there is nowhere to go.

*Spoiler*
Don't go to portal on the right, just go back to left one...
*Spoiler*

First time seeing this game, I'm going to give it a shot it looks awesome!

Uhh, I can't figure out jump...can you list the controls? I found out that Q is randomly explode into gore key though, lmao.

Wait I got it... Shift. Props on the Q key though.

Wow this is clever and ridiculous, I LIKE! I'm done commenting now.

Why is there no way to change the default controls?

Downloaded, will play when I've finished IWBTG. So, possibly NEVER.

Nah, really great work. But you are sadistic bitches, has to be said...

Have ya guys noticed that the faster our gaming machines are - the more old-school games appear to play? :)

uhh lol wut? I'm pretty sure avg is just a bit ****. It must wrongly detect something about game maker executable files :/

Ahm, I am so gonna try this ! Downloading right now...