Post news RSS It is time to think, but I can't do it alone!

I've been gone for 2 weeks, now it is time to work for what I can do!

Posted by xXBornToGameXx on Aug 8th, 2010

Before I left for my event, I made the announcement that I we will be trying to make a SMos:T version of HL2:EP1. When posted, I got 1 of 3 IM's from people. 1) I'm breaking "New Ground" (Really? People haven't made or even try to make a SMod of EP1?). 2) I'm crazy and should drop it for they say that we are going to fail with out a question ( We aren't going to fail 100% we might not make it the way we wont, but we are going to try as hard a possible). 3) "To green, give up now, while you still have a chance" (Green? yes, but I don't really care).

Over the past 2 weeks, I thought "what was the main problem that the old SMod team had?" And it hit me, to much on image, not low on the community. The old team were more concerned about the image they had, and forgot the main thing. With out the community that they had, they would have no image. So I say this, The forums (No matter how small they might be) Will be formed to focus on you! They will stay on the free forums so there is less crap to deal with billing. More topic's and a better lay out with simpler labels.

Along with paying attention to the forums more often, the community will play a much LARGER part in the making of the game. If there is any maps that you would like to see added to the game. A map, A gun, go to the forums and ask for it, or post it a finished version WITH A LINK TO IT, in the are about community add. For the ones that are "top notch" they will be placed in a monthly/ by monthly RAR file (hopefully) for fast download for every one, and those made it might have have a chance to join us in modding team if you think it a good idea (If you find that you don't want to be in the team, or you want to drop out of it for any reason, you may do so by posting a message in the team board saying "I'm done, thank you." and please state your reasons for doing so. We might ask a few questions, but it is up to you answer them, and we ask that you do answer them.)

This is just me going over the base of stuff so people know for further event's that might happen. You know how it works. There will be a huge over hall of the forums (hopefully) going down tonight (8/8/2010). I'm planning full scale planning and production in 2 weeks after a beta testing of a source game starting Tuesday. I know It sounds like I'm making one excuse up after another, but I'm trying to balance a few things before i cut my self off to the world while I work on this, and so you know whats going on so your not cut off on info for a year or 2.

I'll see you all in a few weeks with info.
From: H3XeR.

PS: there are applications for joining the team and becoming a forum mod there. If you wish to join then please join, I will only add them if I see fit. the more people that join, the more I will be looking for. I will make posts when I am looking for more.

PPS: Woke up the next day and forgot to clean up from last night's work. It was more then just the Forums. A little SDK, Little C++. And To much gaming. God I suck. 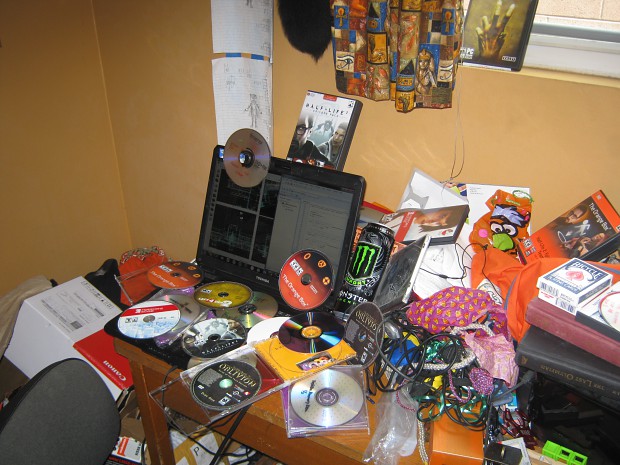 how dare you keep your orange box in such bad condition!

No, they still are in good shape. I needed to do a reinstall, and not a scratch on them. I just do a lot with them.