These past weeks, we’ve been working on Sparta, a brand new world for Okhlos.

We decided to work on a new world, despite not having finished Delphi, because we thought that introducing more levels will give us a better idea of how the game as a whole will be.

So, in Sparta you will find:

Lots of enemies. Most of them, cyclops. Also, some of these cyclops will attack constantly the mob’s leader, so you will have to try and dodge them while controlling the mob.

A new kind of enemy will be the Shield Bearer (not a bear), which can only be attacked from the back (and that meant doing back sprites again… which is a pain).

The main boss in Sparta is Ares, the god of war. He will spawn in a sort of Colosseum, and the battle with him will be very melee oriented. 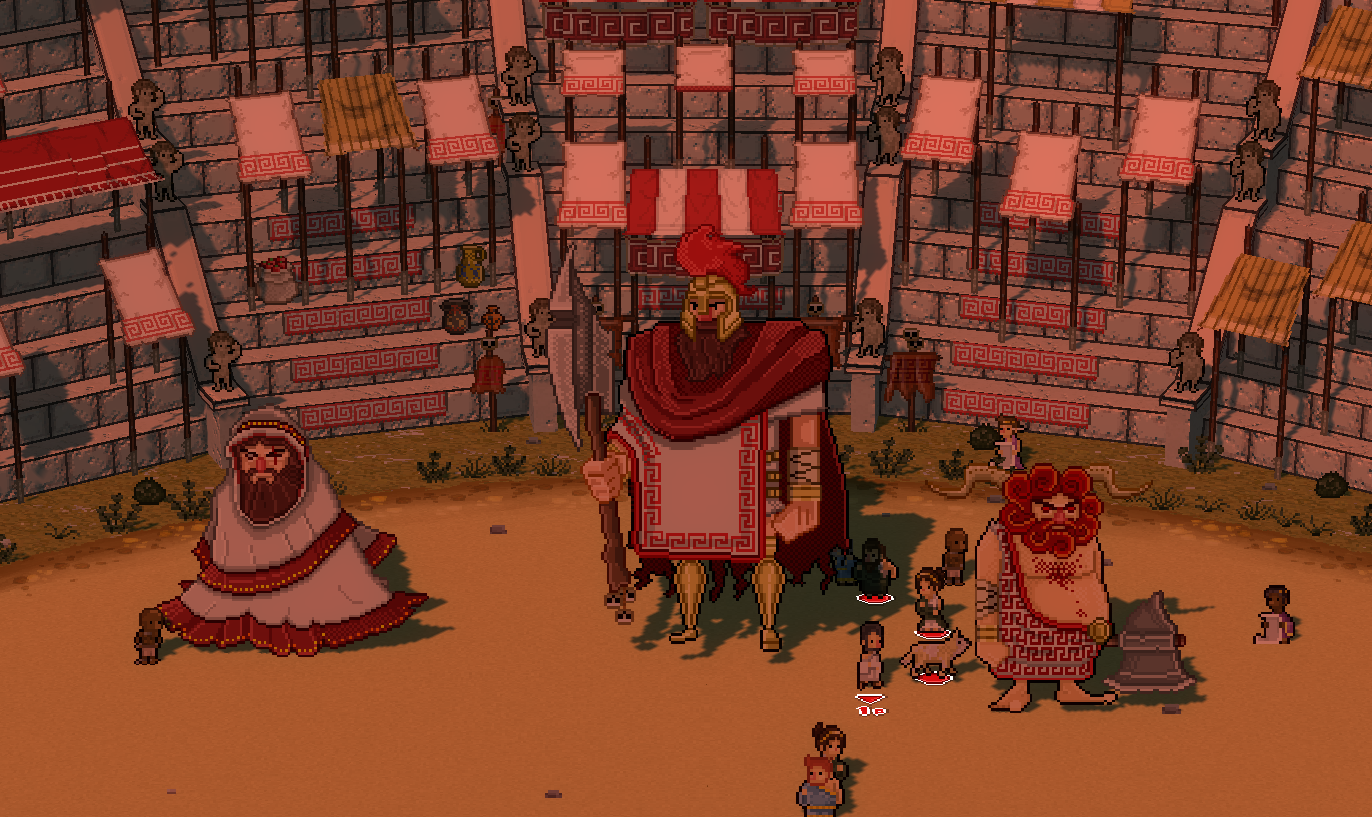 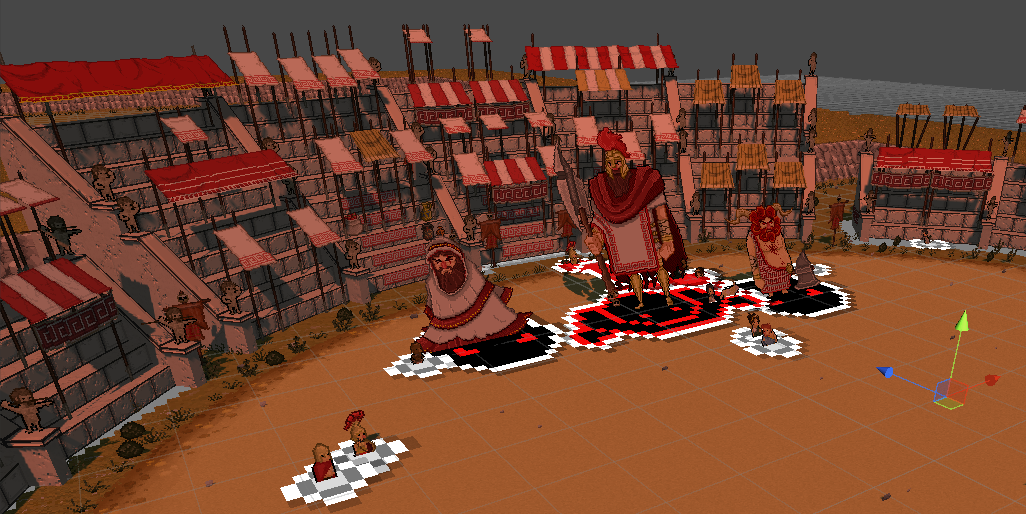 Also, he will spawn with his sons, Phobos & Deimos.

Phobos is the personification of fear (the word phobia comes from him), particularly, the fear in battle. So his powers will affect the mob morale and cohesion.

Deimos, on the other hand, is the personification of terror. It’s something a little more abstract, so that’s why we went with a more mystical approach for him.

This was the original concept art. Deimos in the left, Phobos int the right. Below is the pixel art version. As you can see, lots of changes happen when we translate from concept to pixel art.

Also, Phobos and Deimos are (appropriately) the names of Mars’ (which is the Roman name for Ares) two satellites. All of this makes searching for them a little more annoying (luckily, is not even remote as annoying as Electra).

We wanted to re use a lot of assets to be able to test it quickly, but we made some new things in order to give Sparta a distinctive look. We changed the terrain, we made new buildings, and we changed the roads. 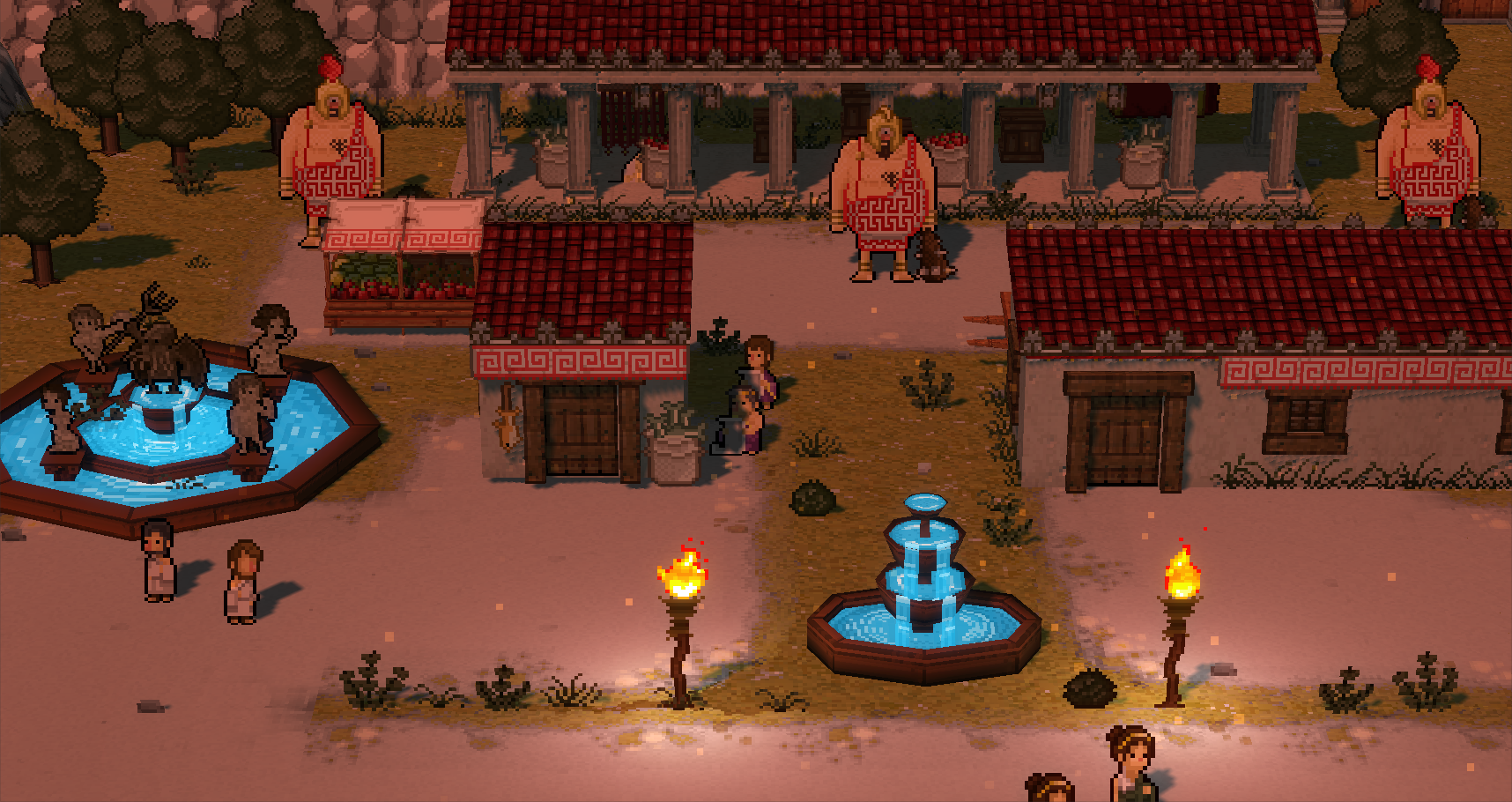 We still have lots to do in Sparta, but this will give us enough to test the new world and see how it feels!

That’s all for this week! Let us know what you think!

That cyclops is stomping a chicken. Depressed forever.

*No chickens were harmed during the production of these photos.