Dienstbier, from hlportal.de, interviewed recently MasterDonut and UnkSoldieR about Raindrop. Here's the English translation of the interview.


Dienstbier, from hlportal.de, interviewed recently MasterDonut and UnkSoldieR about Raindrop. Here's the English translation of the interview:

HLPortal: Who develops Raindrop?
UnkSoldieR: Our team consists of about 15 people at the moment, a more precise list will be released on our website when it's finished.

HLPortal: The stuff you released so far seems very professional, could you gather experience earlier?
MasterDonut: I started in 2004 to work with Valve's Hammer editor. At first just for fun, then I've created some Half-Life2:Deathmatch and CS:S maps. I didn't work on bigger projects like Raindrop so far. Raindrop originally was merely intended to be an exercise, but the whole project became something bigger than I could imagine.
Unk: Generally we can say that our team consists of talented people, who have partly already worked in the industry.

HLPortal: The back story is very detailed, is it fictitious or based on real facts?
Unk: Concerning the run of events of the II. WW, it all happened; but if there were ever such secret plans of the soviets – we don't know; we fabricated it ourselves. Nevertheless it's not revisionist, since we don't question proved facts.

HLPortal: The screenshots promises a lot. Does Raindrop look in-game that good?
MD: The screenshots, which we released, show exactly how the game looks like. There have been rumors that some of our screenshots are edited with Photoshop, but that's not true.

HLPortal: Do you plan voice acting, for every character?
Unk: Yes we do, we initially wanted to let everyone speak Russian, but now we can say that the final voice acting will be in English.

HLPortal: Will the player be playing in the first person, like in a classic fps game?
Unk: Yes, we use classic first person gameplay and add here and there some new features.

HLPortal: Will you borrow content like textures and models from the Valve games?
Unk: The hands of the protagonist are from DoD:Source (re-textured) and we probably will use some NPC models of Half-Life 2 (also modified).

HLPortal: May the player expect game elements similar to the Half-Life 2 series, like physics riddles?
MD: Definitely. The player will be confronted from time to time with various obstacles and puzzles in the levels.

HLPortal: On your modDB profile you're mentioning "a bunch of new code features". What can we exactly expect?
Unk: Head bobbing (the view moves dynamically with every step), of course in an appropriate way; lens flare; iron sights; a new stamina system and the ability to shoot through walls.

HLPortal: That sounds like more realistic gameplay. Does that influence the level of difficulty?
MD: The mod will be more difficult, how exactly we can't tell right now.

We also released an atmosphere video which shows some rainy scenes.

And - as always - here are the latest screenshots: 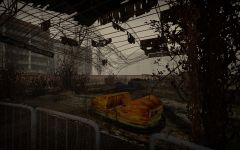 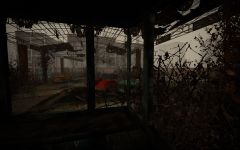 The lightning flash effect seems like somebody is flicking the lights on and off, it doesn't look too good.

That's about the best you can do with Source.

Amazing atmosphere, but I agree with 5omeone on certain aspects.

Yeah, I'd say this looks rather good actually.

Excellent work! Although you may want to record more than one rainfall loop, as the sound of raindrops hitting concrete doesn't quite work when there are open grasslands involved. :D Still, very STALKERish; very impressive. Keep it up!

Great.. but like some other guys already said: the lightning flash could use some work.. because it doesn't look realistic

Mods looking great... It seems like this is from Fallout 3....(8. September 1997, somewhere in Russia. 58 years have passed since the complex has been cut off from the outside world. You wake up in an abandoned tunnel, without even a name ...)

Great spots on the map - very believable and interesting. Another Half-Life 2 mod to watch! Best of luck!

Absolutely beautiful guys! Love that you guys are pushing the Source engine so hard with this, it shows how versatile it is.

I actually think it would be a lot cooler and more authentic if you used Russian with English subtitles, to be honest.

I wish more developers did this, as an American I hate hearing English in places I know it wouldn't be spoken in Movies and other media. It detracts from the art work and immersion quite a bit.

As a mod, I think you should reconsider English voice acting, and use subtitles instead. Or give the player the option, like Crysis did with the Korean speaking AI Soldiers.

But nobody wants to read text! They wanna just listen.

I think you should use Russian voices speaking English. So it still sounds Russian, but in English.

I've gotta agree with doublethink. I'm sick of this Hollywood approach to acting other nationalities and languages (Valkyrie).

People can read and I think you'll find that they'll understand what's being said better by reading than listening, as they won't be so distracted by the visuals as they try to listen.

What is most absurd is when non-European actors voice European accents. I know most people wouldn't pick it, but for us who don't live in Hollywood la la land you can pick it from a mile off and it's about as effective as a bad joke without the punch line.

Also, the Russian-speaking-English accent has been so overdone (Stalker and Call of Duty) already, I'm sure a change would be welcome.

In the end though it depends on who you're targeting with your game.

It's a good point, I hate when English fake European accents. It's only right if it's a genuine European speaking English. But reading text can get draining if there's too much to read. Maybe the team should add both voice and text, and give an option to subtitle / mute voices.

Ultimately I think there should be a compromise. English VA for the scrubs, Russian VA with English subtitles for those of us who don't mind reading.

I think the HL1 mod Paranoia had the same option.

We aren't Hollywood, neither are we creating an AAA-Title. We considered making the voices in russian with several subtitles. But he time and the fact that we aren't working in a studio is what doesn't allow us to do it.
I'm sure you will still enjoy Raindrop.

Too true, and in the end that's what it all comes down to.

However, the advantage of being "indi" developers or modders and not a AAA studio, is that you've got the freedom to experiment with things like this. You don't have a publisher looming over you, threatening to cancel your game if you spend too much time or money. You also don't have to worry as much about what your users think of the game, as it's not like they're wasting any money either.

It's good to know that you considered it properly though.

By the way may I ask what your plans are regarding the voice over/subtitle narration?

Of course Russian is a plus to the atmosphere, a damn huge plus I might say, but we can't include every little nice-to-have-thing. Again, to remind everyone, we're a mod team. We don't get paid, and we want to finish Raindrop - in time.

The lighting and thunder looks and sounds amazing, very atmospheric!

Not bad! The screenies look really good, you've got the lighting nailed.

The video very cool too. The lightning ain't too bad. It does look a tad odd. Maybe it's just the direction of the light, or the syncing with the thunder. Or maybe it's too white - might it need a blue tinge in there somewhere?

Also, could the lightning effect be done with colour correction instead? Might this help?

The atmosphere and general pallette is top-knotch, except the idea of using that theme in particular is really stupid, in terms of a shooter. You make it sound like you'll be fighting solely hostile enemies with rifles and whatnot, which would really distract the game's true artistic qualities (for what they're worth)

now, unless the game is truly terrifying (terrifying doesn't mean necessarily that you have to have mutated experiments running around trying to maul you) by having the player an incredibly easy target for death, but by having him fight incredible odds alone.

Think being holed up in a house firing down from the second when all of a sudden a heavy tank rolls down some trees and pops an HE round in to the wall of the next room beside you - it'd definitely add to the scare value of the player, especially when they know how easy it is to die in the game

all-in-all, the artistic style just doesn't sound like it'll compliment the gameplay style you SEEM to be looking for. obviously, there's going to be mixed opinions on what you've said, and speculation of what is to be expected, but seriously - don't turn the gameplay to ****

...did you read between the lines? I just can't understand how you come up with that...

"a heavy tank rolls down some trees and pops an HE round in to the wall" ... darn it, Raindrop should be exactly like this. Seems like we lost one fan now.

Well...the atmosphere is great. But the first thing i thought when i saw this was: Stalker

Nice work guys, can't wait to see some characters/enemies at some point.

Put me down for russian language with English subtitles btw, Paranoia did it perfectly!