(Planet phase only). Metroidvania/FTL hybrid in the works. Test out some new features for the planet exploration portions. New gun as well as new gun Mechanics. New items to equip as well as item drops. New enemies to watch out for. Lots of little changes that you'll find on your own! 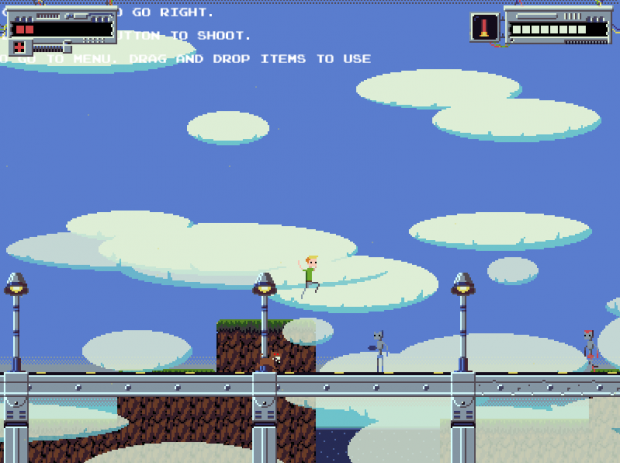 we also have a new gun in:

The current demo is a very simple one. Its really a pre-alpha or proof of concept at this point. You have the ability to fight some of the simple enemies, shoot some of the guns, etc... keep your eyes peeled for a version with the entire space phase and planet phase in a few weeks!

There have been a lot of changes since the last version, but the controls are mostly the same:

To use items: drag items in inventory to player status image.
Ammo drops off of enemies randomly. If you run out that's it!

Feedback always welcome! Seriously I try to put out as many demos as I can, even if they are a little small, in order to test the difficutly/playability/fun of the game. If there's something you do like, something you don't like, etc.. I want to know!

You can reach me here, on twitter, at my blog (http://www.mastercoldrice.com) or anywhere! I always try to use/implement everyone's ideas.

Maybe change the shooting from left mouse to some key on the keyboard? Without three hands it's kind of difficult to move, jump and shoot.