In Running Man we are once again pushing the boundaries of browser-gaming and at the same time sets a series of events in motion, that eventually will lead to the revelation of the back story of the Interstellar Marines trilogy.

Get ready to move, Candidate!
We have already seen that you can handle yourself in a controlled training environment inside Shooting Range D aboard AIV Kitty Hawk 538, but now it is time to prove your worth in grueling combat training under the supervision of Drill Sergeant Barry.

A select group of Elites!
The training takes place two kilometers below ground deep inside a secret military facility. Here you'll face an onslaught of challenging Combat Training Robot in a range of different training environments. If you succeed you'll be one step closer to becoming a part of the elite battalion of Interstellar Marines secretly being established as first line of defense against other sentient species.


Our "Running Man" release trailer which tributes the old Project IM teaser released back in 2005!

Whats new?
As usual we made a bunch of improvements to the game since our last release Bullseye. The biggest of course being free movement and storyline, but we have also added caching, so you don’t need to download Running Man every time you want to play it. 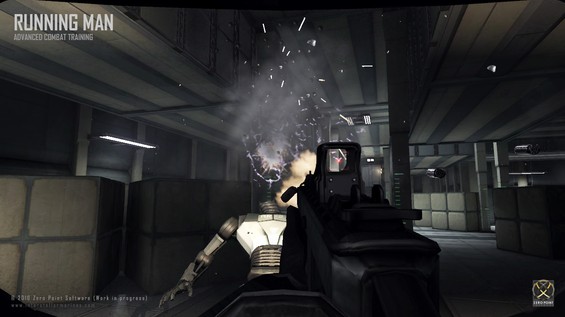 Headshots will fry the fragile control circuits instantly and send most training bots to the ground! 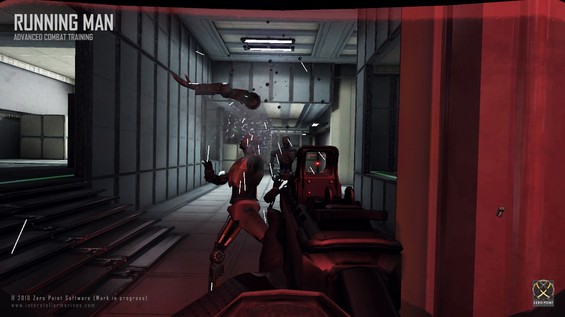 The CE-6 high velocity projectile acceleration can break most CTR parts to pieces!

Your feedback always matters
As you all know this game is being made with the support from you guys. We're constantly checking the forums for feedback on the releases, and to this date we have already made over 15 various additions and adjustments based solely on your feedback on the Running Man Alpha release.

One of the changes was to remove the stamina bar from the HUD because you felt it was to old school. Instead you now have to listen to your breathing to know when you are getting exhausted. We also added a warning indicator so you know when a robots is about to take you down from behind.

Keep giving us your Running Man feedback in the forum, so we can make the best game possible and please help us spread the word about the game by telling your friends about it.

Thanks for your support - Interstellar Marines would not be the same without you!

FOR THE LOVE OF THE GAME,
The team at Zero Point Software

I was a bit meh on your AAA Indie idea, but after reading the FAQ, I want to at least say I fully support it. I intend to buy the spearhead(correct?) account type thing, but may have to hold off, may have to buy later instead. Really sweet game and that AAA Indie thing is a great idea too.

Yes Spearhead is correct, that account will give you access to the 2ª and 3ª game of the IM trilogy for free (and other goodies), you can also convert support medals (5€ each) to a spearhead account if you buy enough of them.

So if you don't have enough now to buy the full Spearhead or even the frontline account them just buy support medals and you will support the AAAindie idea, the making of this game and also maybe have exclusive early access to the multiplayer preview slice, ZPS did that with Running Man.

I BELIEVE!!! and you guys will believe also. ;)

Left a bunch of positive and some improvement feedback at the forums, in the Bullseye and Running man feedback threads respectively.