Greeting, warrior of Jerusalem!Let's talk about knight, the most commonly mentioned topic in medieval europe and crusade.

(This devblog include historical and gaming content to introduce the general background of INJ2. It is concluded by Team Century from various sources, and may not be 100% accurate. If there is any misconception and misunderstanding, please message us and provide sufficient sources so we can correct them on time.)

Knight is heart of Latinic kingdom. The system of knight was introduced by Charlemagne around the 9th century. He asked his levys to mount on horse for war. In exchange, he rewards these mounted warriors with land (benefices) for service. Unlike nobility, the title of knight was not directly inherited, but obtained through military service at the time. Most of the knights were son of knights, because they were well trained since their childhood. But son of merchants or freemen can also become knight if they can be trained properly.

After a hundred years, the Catholic Europe learnt from Normans since the day of their risen; and equipt their heavy calvary with hauberk and iron helmet which similar to Normans' fighting style. Lance, sword and shield became their main combat weapon. Strong warhorses (Destrier) are commonly used by knight and they can form line formation to crush the enemy. This tactic was proved to be very successful during the First Crusade and helps Frankish knights to won several epic battles against Saracens. Despite the fact that in the late 12th century, the appearance of a knight was still similar to the one during the First Crusade period, a lot of detailed improvement and changes were made.

At the beginning, the hauberk developed into a tight, long sleeves style; and in most cases, knight were armed with mittens. The bottom of mail has also become longer than it used to be, while a lot of knights started to equip mail chausse which was rather rare in the 11th century. The weapon of knights also altered with a longer bastard sword (Xlla) during this period. Simutanously, Christian knight started to use more blunt weapons which were influenced by Muslims. The original rounded top kite shield (which was named "long shield" at the time) has been replaced with flatten top as shape of heater (which was named in the 17th century). 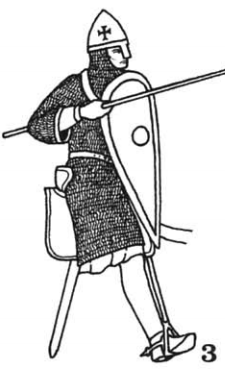 Knight in the First Crusade and the Third Crusade in comparison; drawn by Ian Heath. 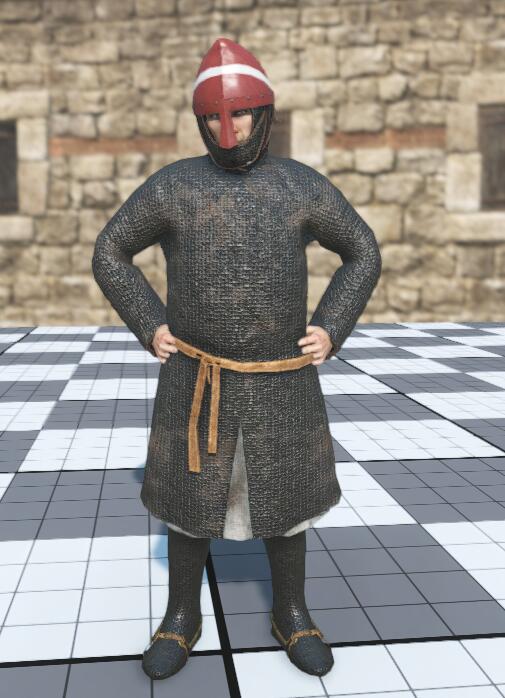 Depiction of a classic looking knight in the 12th century from INJ2 mod; because of a bug in the M&B II editor; currently, we are not able to showcase his hand protection. (Update note: after screenshot this picture, our team member managed to import certain types of hand wears include a knight's mitten.)

Moreover, there were some advanced but less common equipments that has been introduced in this period, such as Faceplate and Surcoat.

Faceplate, the ancestor of Great Helm, was originally evolved from Pointed Nasalhelm. The nasal protection gear has been replaced with iron mask, which protect the whole face from lance and arrow. In addition, such appearance can terrorize some timid enemy and caused a moral collapse (e.g., in A.D 1204 during the siege of Constantinople. A lofty knight with faceplate scared dozens of Roman levys and they were fleed). Many depictions and manuscript from the time period has presented such new helmet. 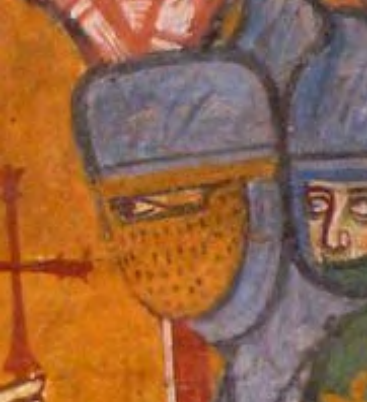 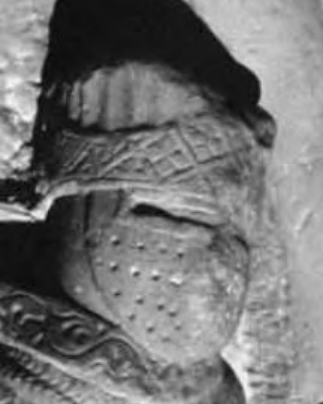 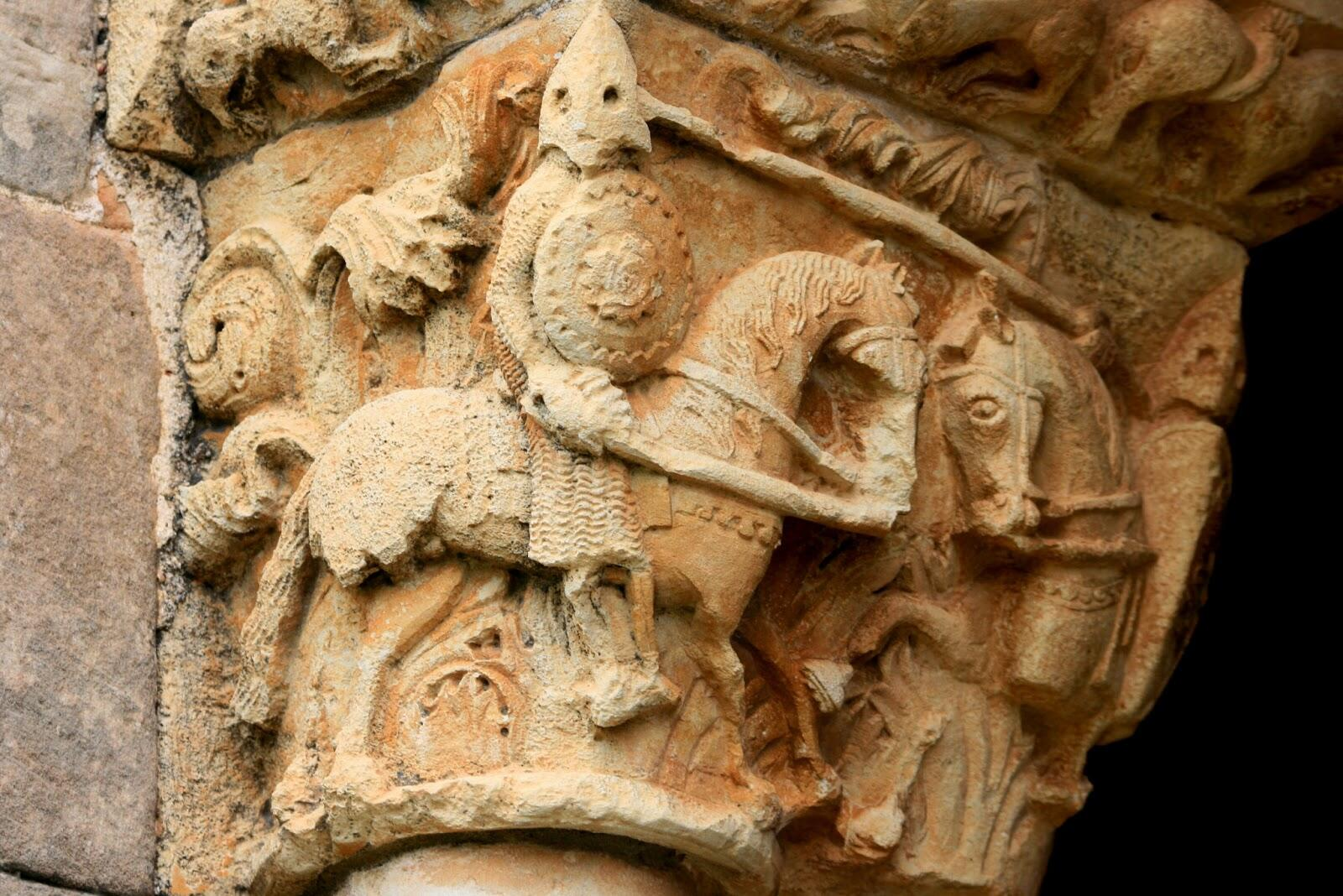 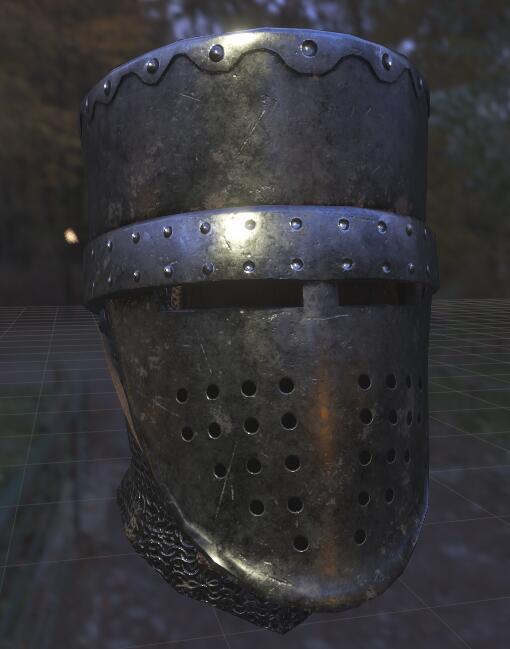 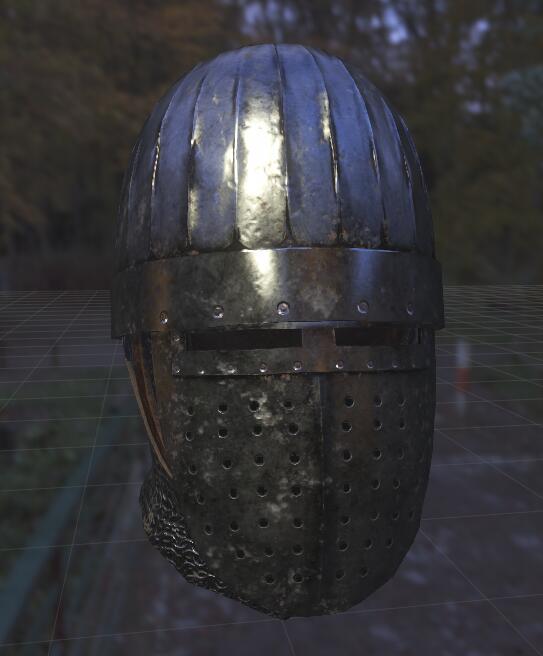 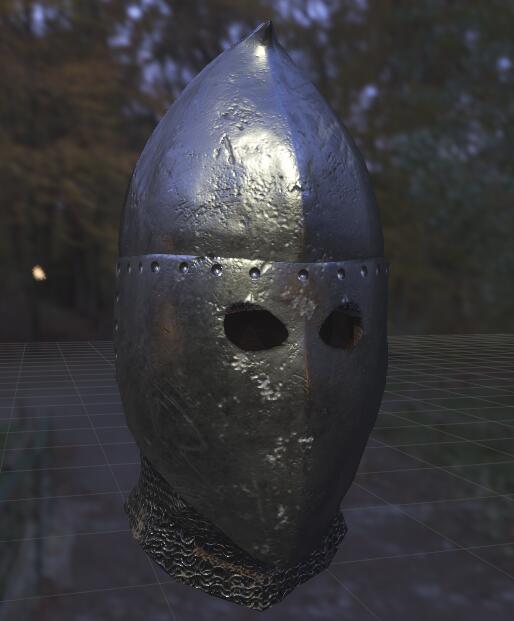 Our depiction following those historical sources above in INJ2; there are also many other types and colour which we will leave them for you to experience in game.

The original source and function of the surcoat are unknown. Maybe it was the result of Saracen influence which they wear luxurious coat over armor. Another possibility was the change of fashions: nobles and knights starts to wear a colourful surcoat to show off their social status. Historically, it was different from the film Kingdom of Heaven that every knight must wear the same uniform and coat of arms – such tradition was made after the mid-13th century. The heraldry has not well developed in the 12th century, so most surcoats and shields was painted in plain colour or simple pattern.

Surcoat in the time was often in sleeveless, loose and pleated style. Some knights even wear surcoat inside their mail together with luxurious golden edged gambeson. But it has not yet been popular in the late 12th century. Some might view it as the surcoat was only worn by greater nobles and high ranked knights, but that opinion is not tenable. As many nobles such as Richard the Lionheart and Philip I, Count of Flanders are not wearing a surcoat when depicted in their seal. Obviously, they are in the upper rank of the society. So we come to a conclusion that this might be related to fashion on that time, which is similar like where we are today. People do have their fashion and style, but it might not be a common practice for everyone.

In the later century, Surcoat and Great Helm has become a common fashion and basic gear for knights, which also become what a classic medieval knight is commonly known to us. 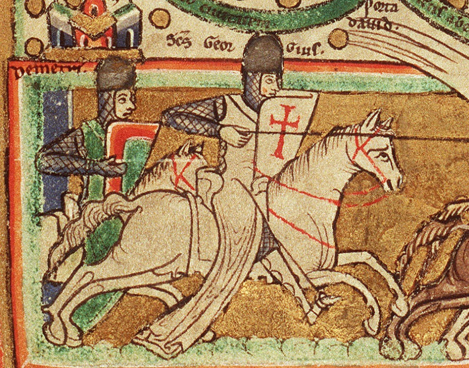 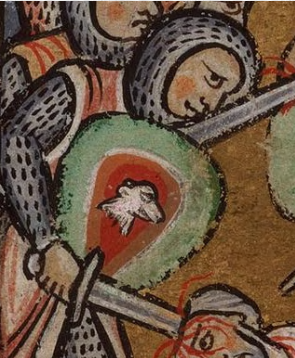 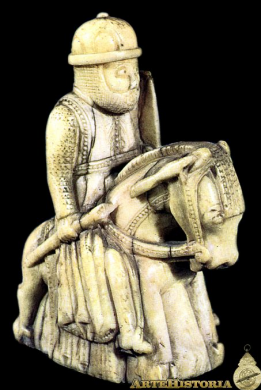 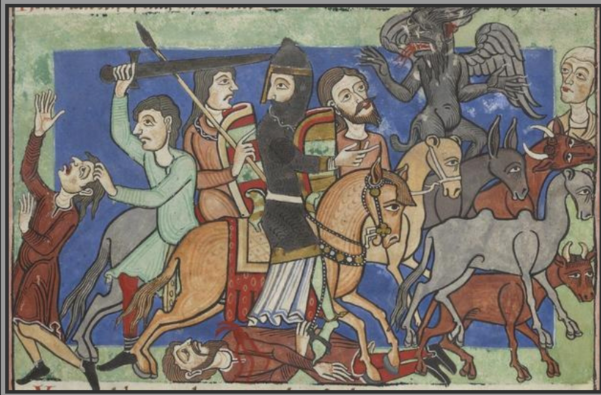 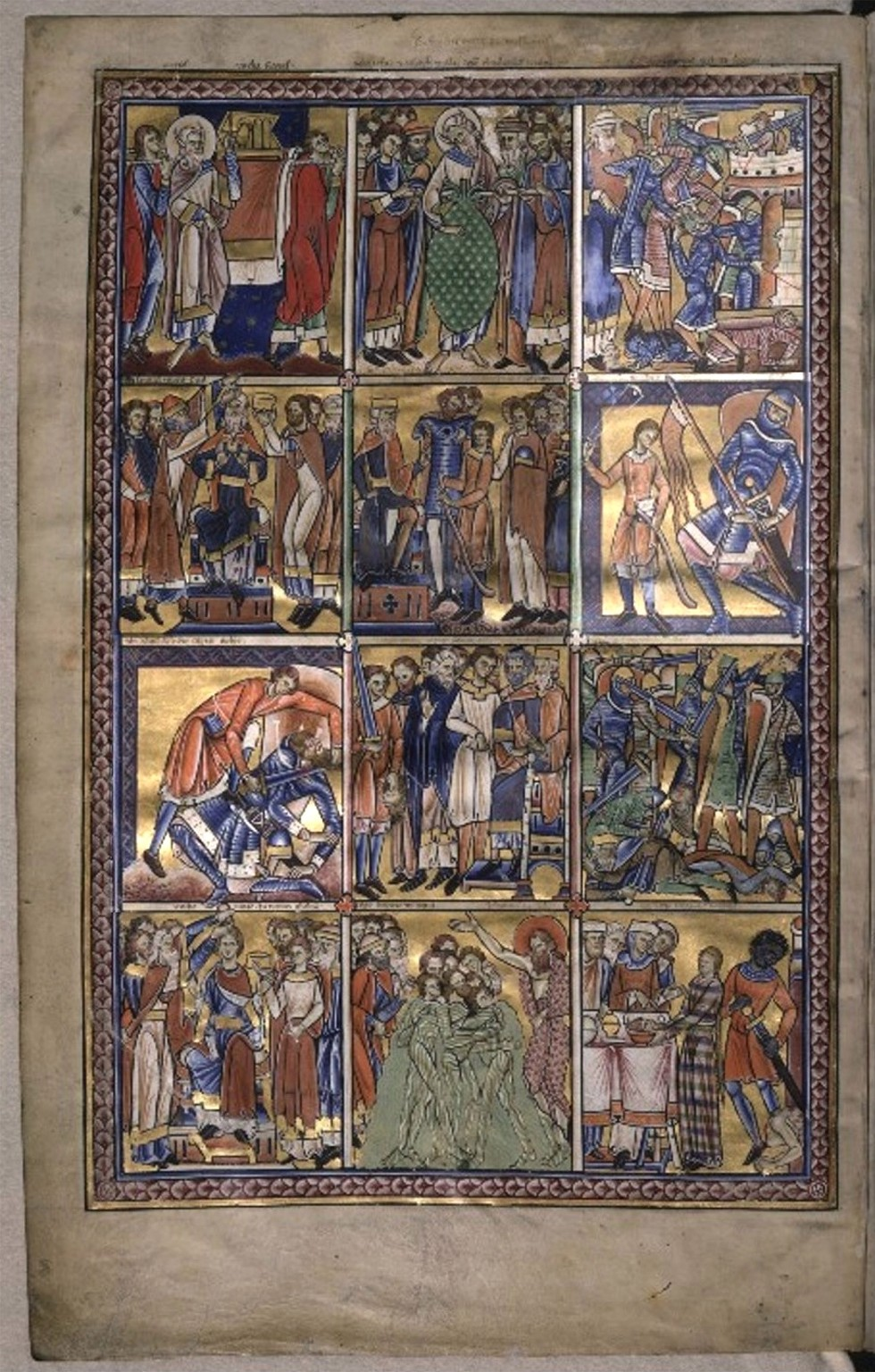 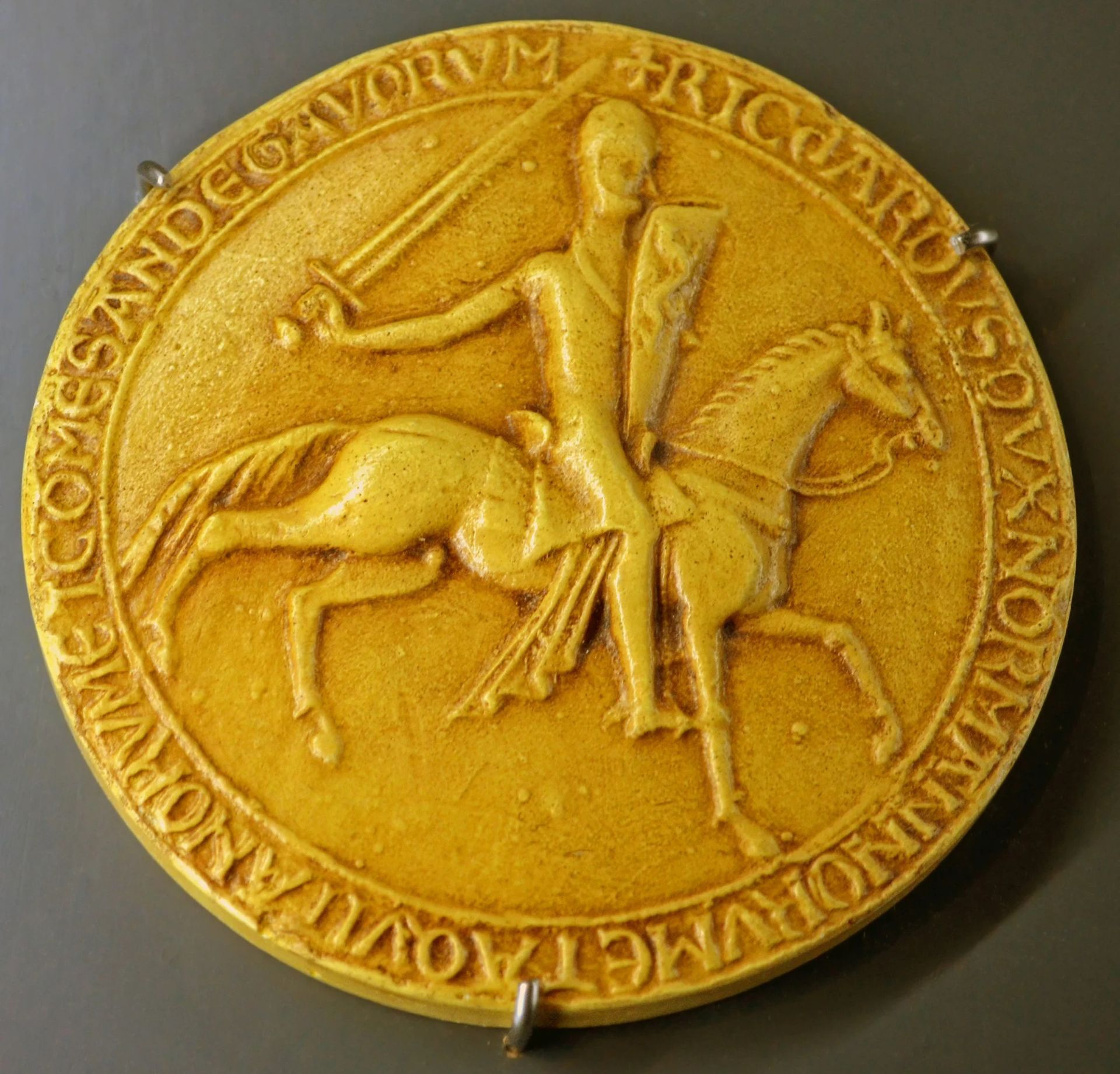 Seal of King Richard I

Let us move our topic to horse and harness. In the 12th century, a warhorse was extremely expensive. The average height of the best warhorse (Destrier) was 17 inches(about 1.72m) and would cost about 20-100 pounds or higher. While the income of knight in the late 13th century was only 1-2 pounds per month. Knights prefer to ride their best warhorse in tournaments instead of battle in order to protect their precious mount.

The second class warhorse (Courser) was common on the battlefield. Its weight and price are inferior compare to Destrier, yet it is still a fine horse to mount. In the 12th century, every knight had at least two coursers, and some other cheaper mounts (Rouncey). The weight and height of Rouncey are similar to Courser. But unlike their master, they do not need to be pure in blood (maybe that is the difference between commoner and nobles when we talk about horses).

Warhorse was precious for knights in Levant as they have to face hit-and-run tactics from Saracens, which often cause injury or death of their warhorse. The European warhorse was not common to see, as they have to be transported across Mediterranean which makes them very expensive. It would also be a heavy burden for a knight if his horse got sick or died on the way. As result, during the peace time, horse was mostly purchased from Syria and trade with Roman in Cyprus; they were also often looted from battle. However, the quality of domestic horse may not satisfy the demand for knights, so many cheaper warhorses from regions like Cilician Armenia and Turchia has often been redistributed to mounted Sergent or Turcopole (domestic recruited mounted archers and light cavalry, which will be discussed in future devblog).

The protecting gear for horse has developed in the 12th century, by the influence of the East and the heraldry, the surcoat for horse appeared in painting and records. But early surcoat for horse did not provide strong protection. However, in a certain instance, they can defend against some light arrows as well as showing identity of their master. Nobles often paint their coat of arms in housing (cloth for horse) and choose brighter color. But in current evidences, very few nobles have housing for their horse, and most horses were still naked in the battlefield. 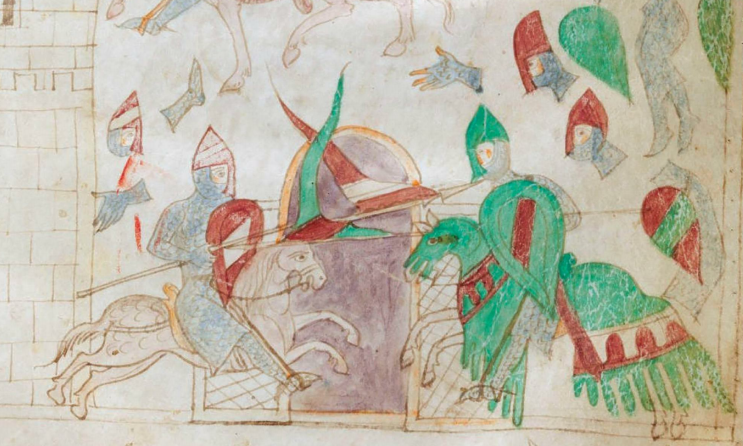 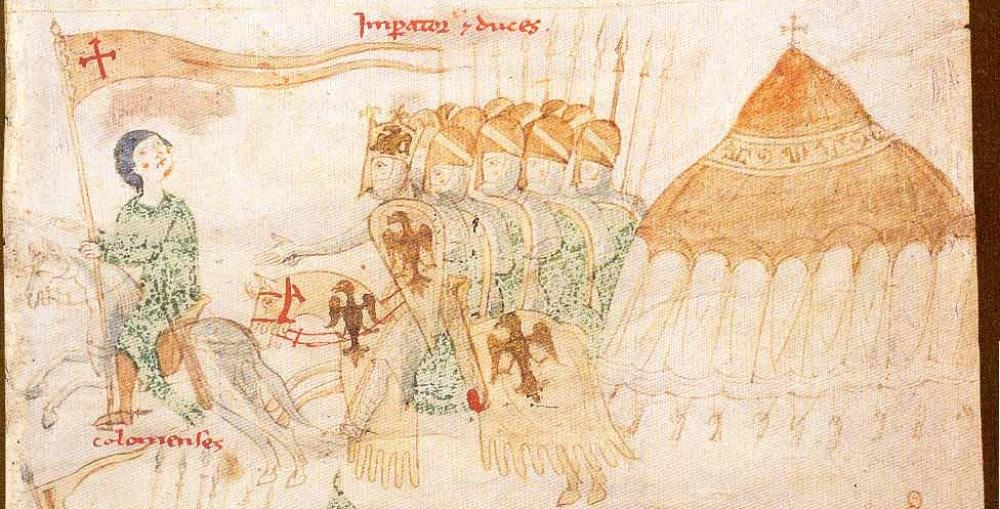 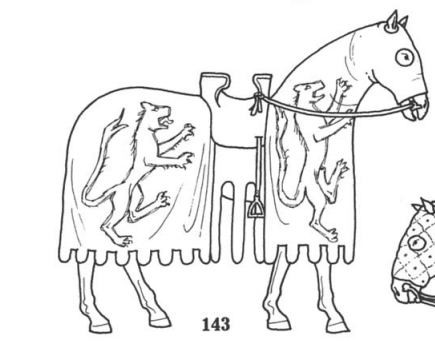 Warhorse with housing in 12th century, drawn by Ian Heath

The knights in INJ2 would still exist as feudal noble soldiers as we set in INJ1. The Frankish lord who owns fief can recruit their own knights; despite there are only few of them, they are deadly against infantry and archers. We will reinforce these noble warriors in order to present their power as military elites during the high medieval period.

Some screenshots we attached from INJ2 are as below, but please keep in mind that they are still work in progress. If there is any error or mistake, please contact us. 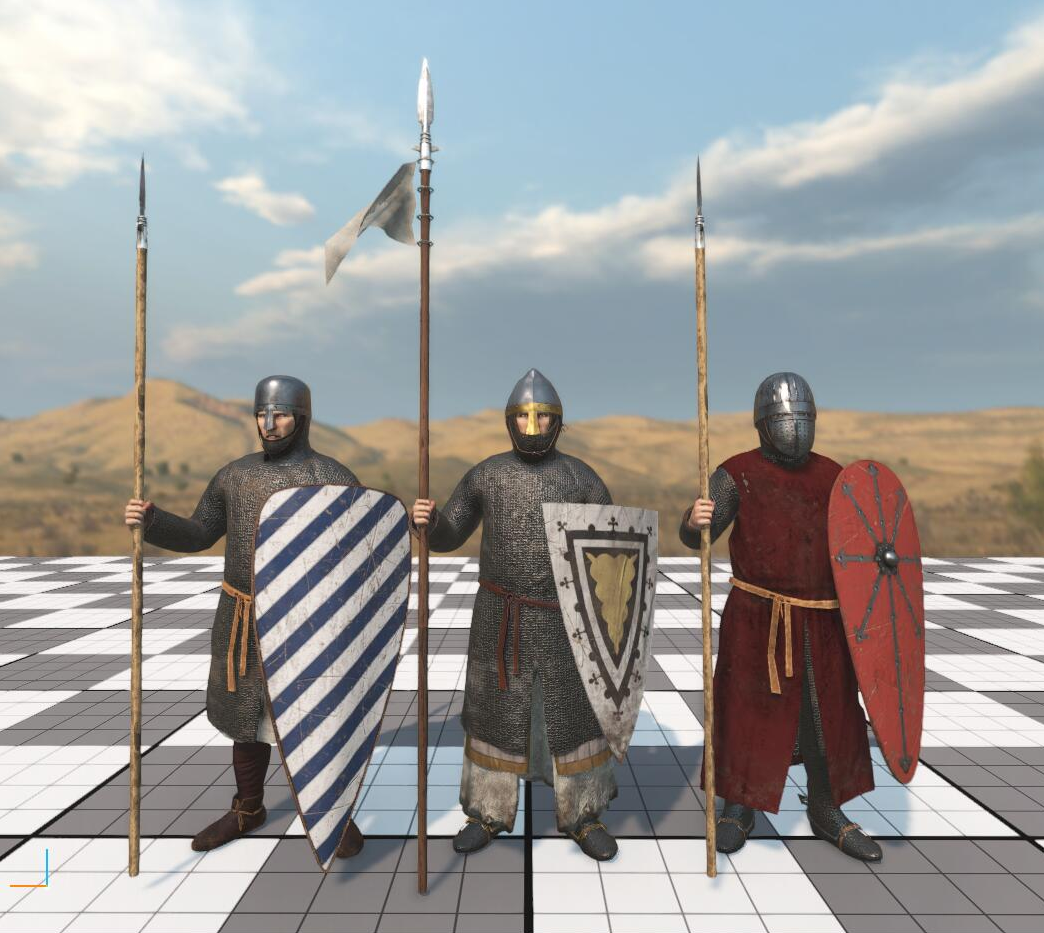 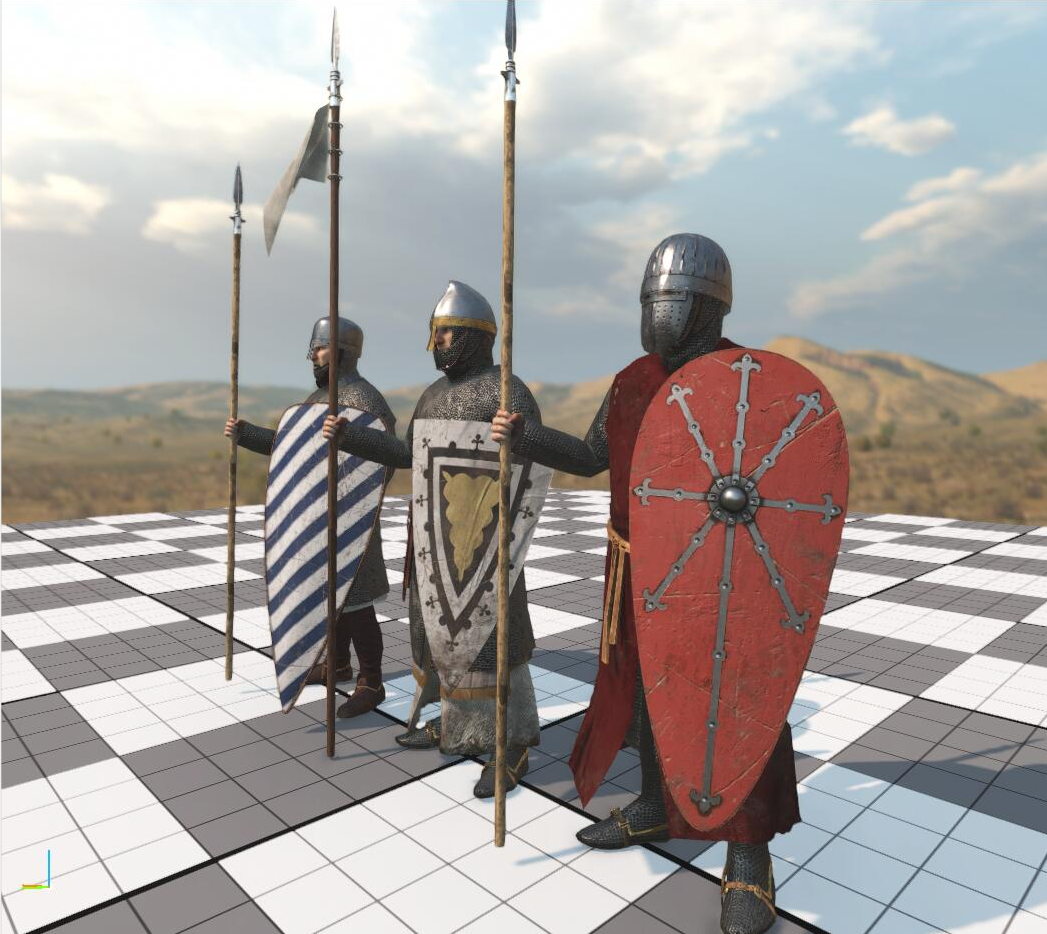 Due to current status of Modding tools, we are sorry to inform you that mittens and harness can't be imported in the game. (Update: our team member managed to import some types of mitten into the game!) 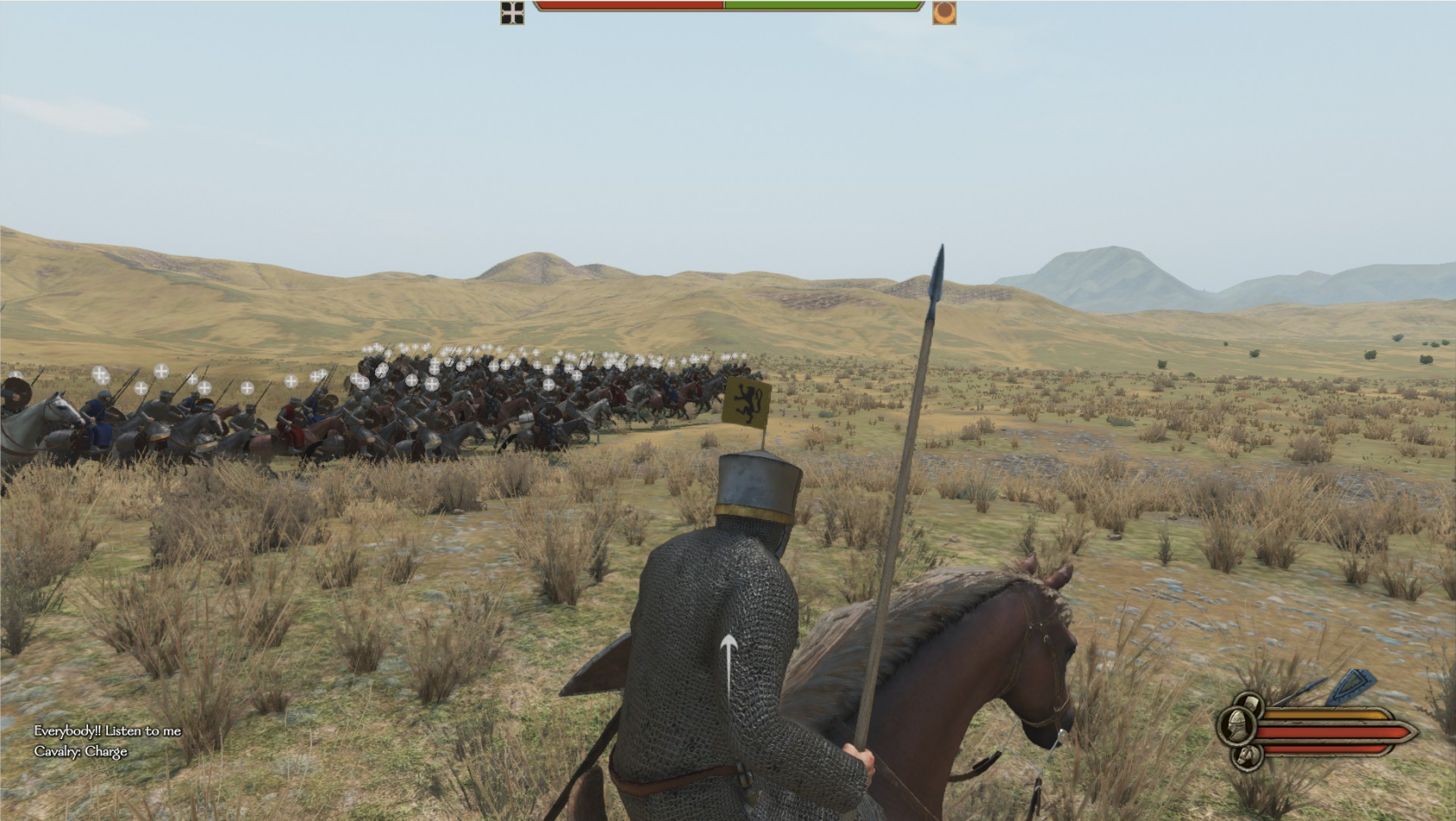 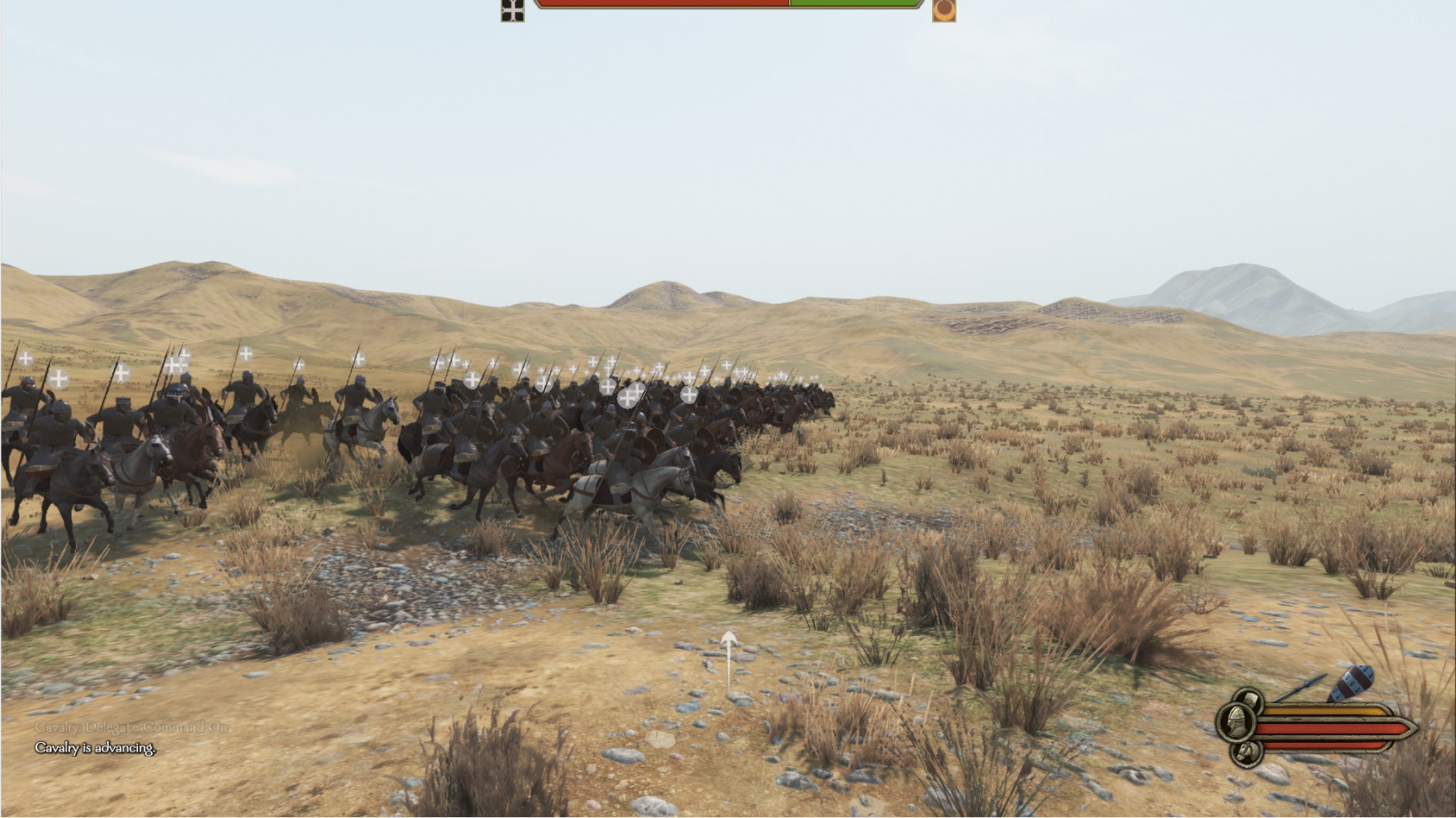 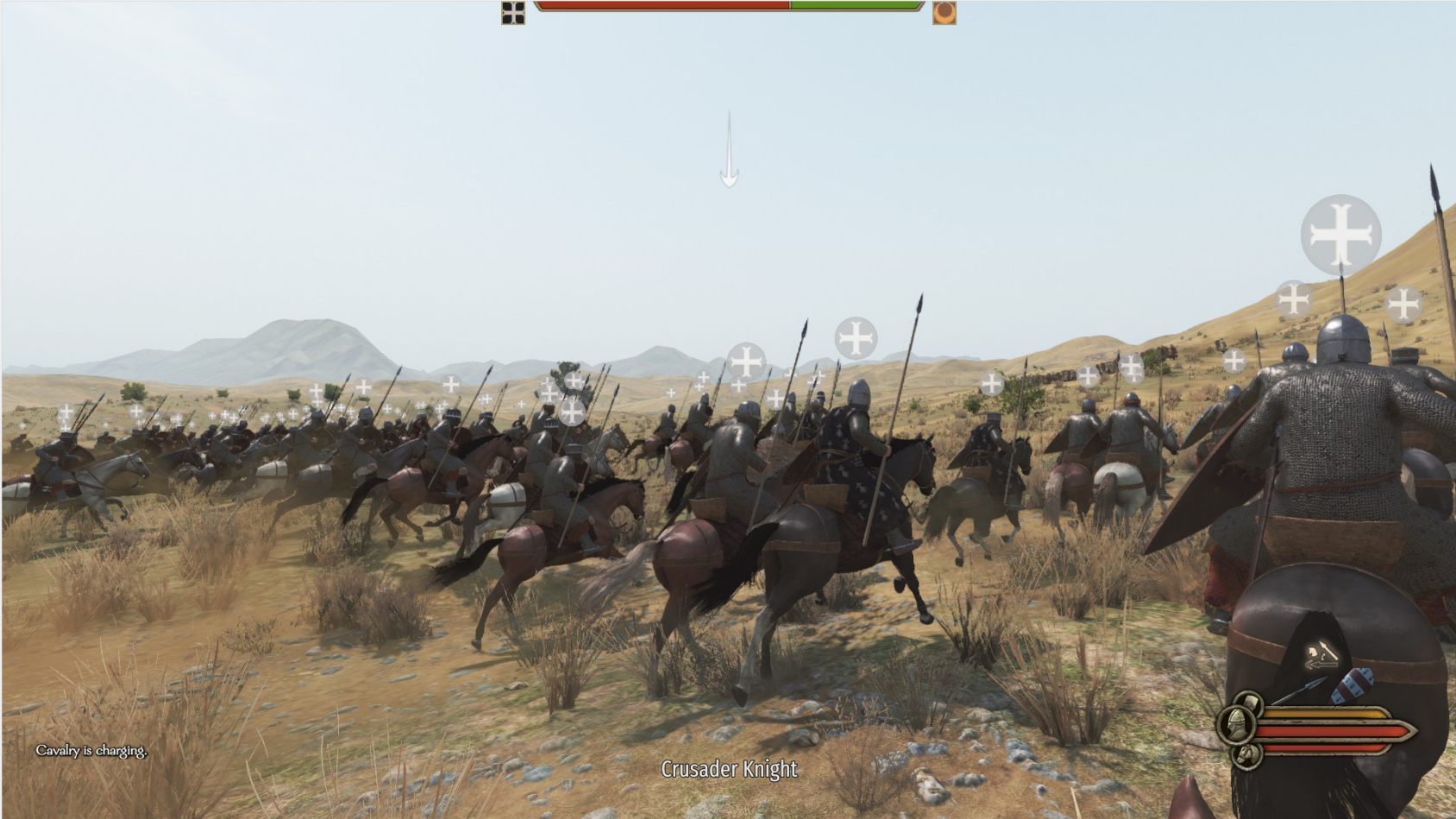 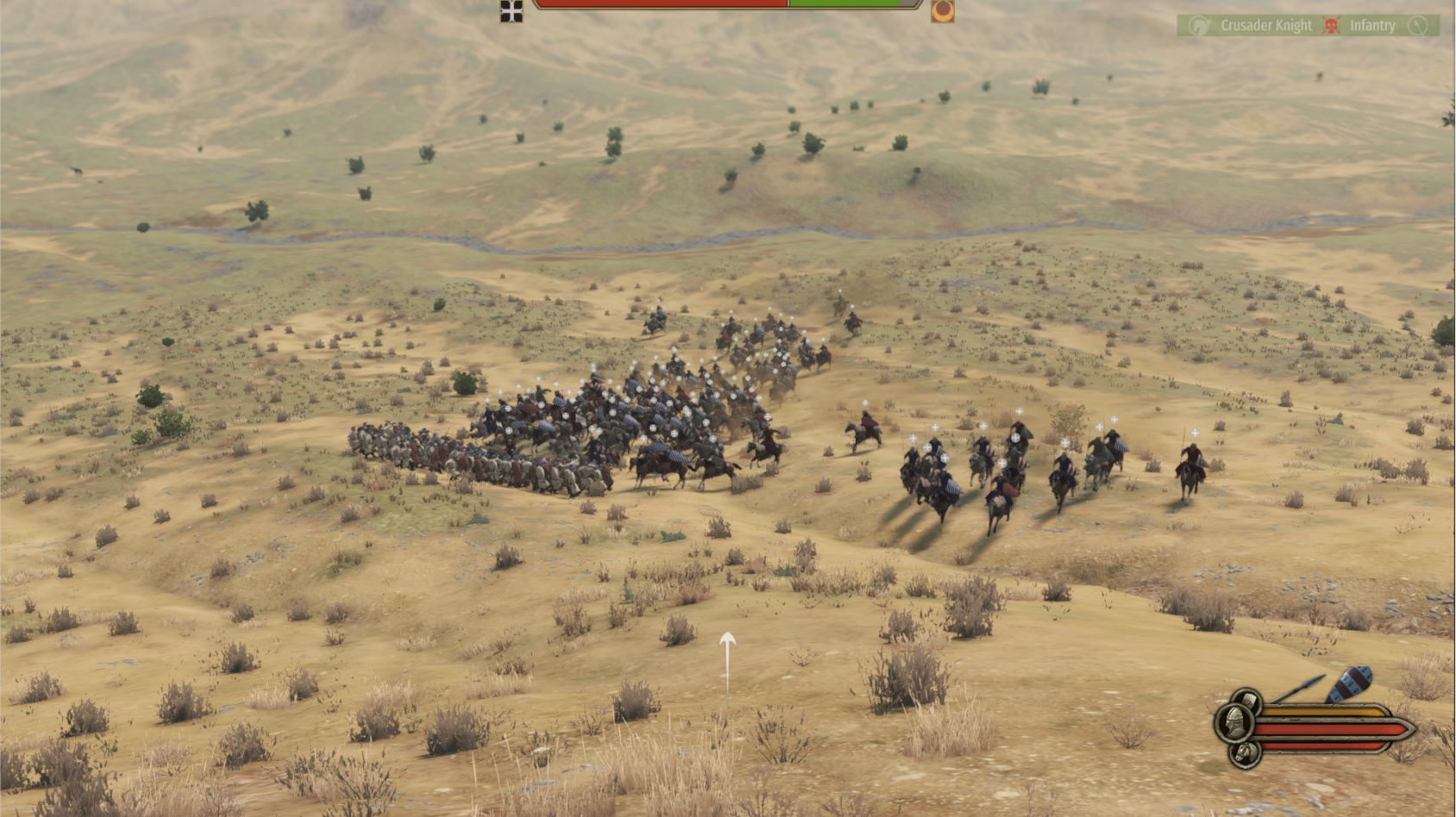 Crush the infantry formation with a massive frontal charge! Kill them all!

Thanks for your reading. We will introduce more content for Kingdom of Jerusalem in the future. See you in the next devblog!

This whole article is pure awesomeness and sexy, thanks for your work

Wow! The dedication to historical accuracy and quality is really exceptional! Thanks for the update and keep up the great work!

I have read in this book from historian and researcher (in french ) Persee.fr, first sources for heraldry starts in like 1150's. Oldest heraldry known is of Raoul 1er de Vermandois in 1146, second Geoffroi Plantagenêt in 1155. The heraldry is result of mixing of banners patterns, seal symbols and of shield which give the shape. They paint symbol on their shield cause they can't recongize each other cause of too much mail, this fusion starts in years 1120-1140. Early heraldries where mostly copy of simple banner pattern on shield and then they add symbols like animals or flowers most of time took from their seals etc. It's what it is said in the book. The book is from 1976 so there is maybe other discoveries since. But it's the more reliable info i ever found.